More books for reds and greens. Vanishing Fish … Between Earth and Empire … Making Rojava Green … One Planet, One Health … Why Carbon Trading Fails 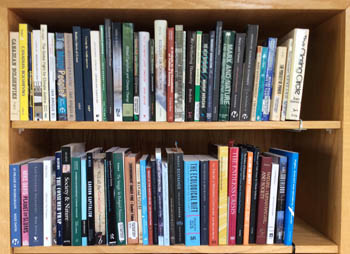 Daniel Pauly
VANISHING FISH
Shifting Baselines and the Future of Global Fisheries
Greystone Books, 2019
Award-winning biologist Daniel Pauly examines the parlous state of today’s global fisheries. Starting with the rapid expansion that followed World War II, he traces the arc of the fishing industry’s ensuing demise, offering insights into how and why it has failed, His practical recommendations for a way forward incorporate a vision of a vibrant future where small-scale fisheries can supply the majority of the world’s fish.

John P. Clark
BETWEEN EARTH AND EMPIRE
From the Necrocene to the Beloved Community
PM Press, 2019
Anarchist philosopher John Clark criticizes both right and left approaches to the global crisis, arguing that a large-scale social and ecological regeneration must be rooted in communities of liberation and solidarity, fostering personal and group transformation so that a culture of awakening and care can emerge.

Internationalist Commune of Rojava
MAKE ROJAVA GREEN AGAIN
Building an Ecological Society
Dog Section Press, 2018
“The connections between the market economy, exploitation, destruction of nature, war and migration show what the result is when centralist and hierarchical systems try to subjugate nature. A solution that ignores these relationships, a solution within the existing system, is not possible.” Kurdish freedom fighters offer their views on how to build an ecological society.

Merrilyn Walton, Editor
ONE PLANET, ONE HEALTH
Sydney University Press, 2019
A multidisciplinary reflection on the state of our planet, human and animal health, as well as the critical effects of climate change on the environment and livelihoods of people. Going beyond the narrow disciplinary lens and an exclusive focus on human health, a planetary health approach puts the ecosystem at the centre.

Gareth Bryant
CARBON MARKETS IN CLIMATE-CHANGING CAPITALISM
Cambridge University Press, 2019
Carbon trading schemes were supposed to slash emissions, but every one has failed. Bryant discusses what went wrong with the marketization of climate change, and points towards more targeted and democratic policies to combat climate change.