There are no easy fixes, but to succeed, climate activists must build a broader movement to challenge and transcend global capitalism 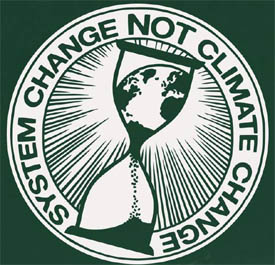 There are no easy fixes, but to succeed, climate activists must build a broader movement to challenge and transcend global capitalism

Hans Baer is the author of Democratic Eco-Socialism as a Real Utopia. He originally contributed this essay to a recent online discussion on “The Climate Movement: What’s Next?” organized by the Great Transition Initiative.

The climate movement both at the international level and within specific countries is quite disparate, meriting a distinction between climate activists per se and climate justice activists.

Representatives of the former include organizations such as the Climate Action Network, Greenpeace, and Al Gore’s Climate Reality Project, which emphasize the need for renewables, energy efficiency, and other techno-fixes and attempt to work within the parameters of global capitalism.

Others, such as Friends of the Earth, Climate Justice Action, and various socialist and anarchist groups, are attuned to the enormous social inequalities along class, racial, ethnic, and gender lines within the context of the capitalist world system, and spotlight how climate change most adversely impacts the poor, women, and indigenous peoples around the world.

Climate justice activists seek to transcend global capitalism, thus prompting them to use the byline, “system change, not climate change.”

Despite internal differences, climate activists of varying political orientations tend to converge on specific campaigns, such as blockages against Keystone Pipeline in North America and the Stop Adani! campaign against a proposed coal mine in northeast Australia.

However, the distinctiveness of climate justice action has been coopted to some degree by elites such as Mary Robinson, the former president of Ireland, a UN Special Envoy on Climate Change, and the author of Climate Justice (2008). She believes that economic growth built on sustainable energy and land use will safeguard the lives of the most vulnerable from the effects of climate change and offer the best chance of lifting more communities out of poverty.

What she does not address is how such objectives can be achieved without radical and economic change. How can she reconcile a desire for environmental sustainability with her membership in the B-Team, a group of business leaders (formed at Davos) that includes Richard Branson, whose Virgin Galactica project promises space tourism for the super-rich? Robinson’s efforts, regardless how well-intended, essentially domesticate the notion of climate justice, reducing it to a moral problem that can purportedly be solved by persuading the rich and corporations to do better.

As an ecosocialist, I am a staunch advocate for the eradication of global capitalism, which I view as the main driver of anthropogenic climate change. Many climate activists continue to be reluctant to identify capitalism as the “elephant in the room,” thinking that doing so will alienate many mainstream progressives.

Nevertheless, I believe that climate activists need to advance alternatives to capitalism, not just tweaks like the adoption of renewables, electric cars, and carbon pricing.

We anthropologists understand that social systems do not last forever. European feudalism persisted for some 900 years but gradually evolved into capitalism, which over the course of 500 years evolved into a world system. Many scholars and activists argue that the world tried socialism and it failed, as was illustrated by the collapse of the Soviet bloc and the emergence authoritarian regimes such as Maoist China, North Korea, and Pol Pot Cambodia.

These efforts to construct socialism failed for a variety of historical and social-structural, internal and external, factors. Now, socialism needs to be re-envisioned for the twenty-first century, an effort underway in various quarters, including among those developing the notion of ecosocialism. We need to transcend speaking of “postcapitalism” without clearly envisioning what should be next.

Whatever we term the next system — ecosocialism, ecoanarchism, postcapitalism, global democracy, Great Transition — the more crucial question is how we go from A to B, from capitalism to whatever we may wish to term B.

The transitional steps provide loose guidelines, not a blueprint, for shifting human societies toward a more socially just, democratic, and environmentally sustainable system that can return the planet to a safer climate. Constructing an alternative to global capitalism is the ultimate climate mitigation strategy, even though it will not be achieved anytime soon, if indeed ever.

Along the way, of course, many of the more modest objectives promoted by the climate movement would be part of a transition to an alternative world system, one that will be manifested in different ways in different countries.

Social movements will play a crucial role in initiating the radical transitional reforms that I have delineated. These include the labor, anti-corporate, justice, ethnic, women’s, indigenous, environmental, climate, and peace movements, all of which have tendencies or segments that are explicitly anti-systemic. Also, radically changing the world will require a multiplicity of interstitial movements situated within mainstream society where people develop alternative social relations and communities.

The challenge anti-systemic movements now face is uniting in their struggle against a common foe, namely, global capitalism. Ethnic, national, religious, and cultural differences too often have divided subalterns around the world and prevented their forming a united revolutionary movement. A viable anticapitalist movement will have to address the material impoverishment of much of the world’s population.

Many parties, ranging from the World Bank to entertainment celebrities, make appeals to “eradicate extreme poverty” or “make poverty history.” However, “make wealth, particularly extreme wealth, history,” and the eradication of poverty will follow.

Personally, I hope that the ecosocialist vision will serve as an integrative focus for anti-systemic movements, including the climate justice movement, within nation-states and transnationally, although I recognize how daunting this task will be.

Much of the climate movement is focused on moving beyond fossil fuels, a worthwhile endeavor. However, just as capitalism operated on other forms of energy prior to the Industrial Revolution, capitalism could theoretically operate on renewable sources of energy, which will also require enormous resources to develop and maintain.

Even though some version of green capitalism might bring down greenhouse gas emissions to some degree, it would not address the social inequities, limited democracy, militarism, and the threat of nuclear warfare that are part and parcel of global capitalism.

Climate justice and social activists face an incredibly daunting task. The next two or three decades, if not the next decade, will bring great hardship for much of humanity, exacerbated by the rise of authoritarianism, including in the US White House. As climate change increasingly impacts human and non-human beings, the powers-that-be will be inclined to construct a Fortress World to protect their privileges, borders, and market system. There are no easy fixes to these grim realities, but it is imperative that climate activists become climate justice activists as part of a meta-movement to challenge and transcend global capitalism.