New report investigates how US unions are addressing climate change — and why and how their positions vary. 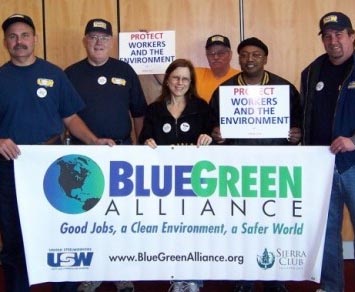 New report investigates how US unions are addressing climate change — and why and how their positions vary.

“Long term solutions require broader and public just transition policies and those can only be the result of strong political coalitions…. Such coalitions must and should include workers across the board – as well as other societal forces … nor can others speak for the workers affected.” —Dimitris Stevis

With interest growing in Green New Deals in various countries, and even talk, by Yanos Varoufakis and others, of an International Green New Deal, it is imperative that we consider the views of workers whose active, mass support is essential if any GND is to succeed.

In that context, this report, published by the Adapting Canadian Work and Workplaces to Respond to Climate Change program at York University in Toronto, is very timely. Dimitris Stevis of Colorado State University investigates how US unions have addressed climate change — and why and how their positions vary.

His research covers 50 recent initiatives at both the local and national levels. The latter include the Labor Network for Sustainability (LNS), Trade Unions for Energy Democracy (TUED), and the BlueGreen Alliance Foundation (BGA).

He notes that unions discussed environmental justice as far back as the 1970s — the work of Tony Mazzocchi of the Oil, Chemicals and Atomic Workers Union is best known. Shortly after that, however, a cleavage developed, with several unions adapting to the “jobs over the environment” rhetoric of the right. The Just Transition Strategy was opposed by the United Mine Workers of America and most just transition work came to an end by the end of the century.

On the other side, in 2008 the Steelworkers and the Sierra Club launched the BlueGreen Alliance (BGA), which has continued ever since, in spite of opposition from conservative unions, in the building trades.

One of the most useful features of Stevis’ analysis is a table which lays out the spectrum of US unions’ positions on climate policy. He avoids a simplistic binary of “for or against” positions, presenting a more nuanced picture of variation between and even within unions. He divides union positions into the following categories:

Stevis goes on to provide details about the climate positions of unions in the following production networks: energy; construction; manufacturing; transportation; and services.

The second part of his report, titled Explanations, explores the reasons behind these varying union positions. He prefaces this section of the report by stating that economic data alone are not compelling, and that social power and inequality must be addressed, which is “a central goal of networks such as LNS and TUED.”

One factor that affects union perspectives is the fragmentation of American unions compared to those in Europe. Part of this stems from the evolution of some unions that originated in one sector into more general unions — Steelworkers represent workers in manufacturing and education, Sheet Metal Workers also represent railroad workers, and so on. “Internal fragmentation,” Stevis says, “leads unions to pursue competing priorities or prevents them from taking a position… For example, the Electrical Workers union is a leader in renewables but is also a strong supporter of coal — because it represents workers in coal-fired utility plants.”

Relationships with other institutions also influence union policy. Building and construction unions, for example, have long been part of associations of building contractors.

Relationships with environmental organizations are weaker. While several environmental groups share labor’s concerns, only the Sierra Club has a specific labor program, and “no unions have an explicitly environmental program/department that connects leadership, middle level and local unionists… The BGA plays such a role for a number of unions, but without the internalization of environmental and labor priorities by unions and environmentalists, respectively, the BGA is not sufficient.”

Without using the terminology of “rank and file-ism,” Stevis is clearly pointing in this direction, to the need to engage and mobilize ordinary workers, not just staff and high-placed officials.

Stevis goes on to describe how union positions can also vary by individual state governments, some of whom have taken their own initiatives responding to the climate crisis, in the vacuum left by inaction at the federal government level.

The report does not discuss previous attempts at just transitions, virtually all of which have been tremendous failures for workers, leaving many highly skeptical about current discussions. Nor does it call for any specific measures that a just transition might require. But he does argue that developing transitions must include everyone affected: “Just transitions limited to particular cases are likely to breed resentment.… Coalitions must … include workers across the board as well as other societal forces. They cannot be limited to those who have ‘equity’ in the narrow sense — nor can others speak for the workers affected.”

Those involved in promoting and developing just transitions and Green New Deals can learn from Stevis’s study, and activists in other countries could benefit from undertaking similar studies. Understanding the positions of workers’ organizations is critical to the fight to end fossil economies.