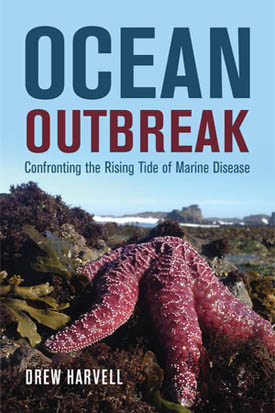 She warns that “warming the climate and polluting the sea will give new opportunities to underwater microorganisms, resulting in explosive new outbreaks of infectious disease.”

While Ebola was traumatizing human communities across West Africa in 2013, another virulent disease attacked a very different species from California to Alaska — sea stars, often inaccurately called starfish. In both cases, the outbreaks resulted from environmental conditions that allowed a virus to overwhelm a population. Both people and sea stars were suffering from environmental degradation and biological stress.

And, as with Ebola, a slow and underfunded response by neo-liberal governments led to thousands of deaths that could have been prevented. The agonies of Ebola victims have of course been well-publicized; only specialists knew about hundreds of thousands of sea stars dying with their arms twisting away from their disintegrating bodies along thousands of miles of U.S. sea shore in the United States.

Harvell is brilliant at making complex science accessible to non-scientists. Her descriptions of coral reefs, kelp forests, coastlines and the species they support are wonderful. She explains what we know about marine ecology and disease and what the gaps are, while showing that that the work of scientists who actually study them is truly amazing and often unglamorous.

Some experiments could involve collecting gallons of sea water and risking virulent disease to perform tests that must be completed in one day, no matter how exhausted everyone is. Others involve simply moving a sea star population to a different stretch of coast, to determine what happens when top predators disappear. She also describes interesting studies of sea grasses and the ability of plant species to clean their surrounding water by filtration or metabolizing pollution.

Harvell shows that there are different ways into working in science and how collaborative strong science is. As younger people join labs and projects they bring experience of the latest technological processes and teach their teachers. It is also extremely refreshing to read about the many women scientists involved in different aspects of virology and marine biology.

Outbreaks of disease in marine life are not new. In coral reefs, home to around 25 percent of marine fish species, they have been recorded since the 1970’s. But increasing bleaching events have panicked financial institutions, including the World Bank, which has partially funded Harvell’s research since the 1980s. Each outbreak represents a potential loss of millions of dollars worth of tourism and marine products and disaster for the communities that rely on them.

Primary school children started the Save our Stars campaign and sent her lab $400, raised by selling t-shirts. U.S. politicians, on the other hand, have failed even to vote on the Marine Diseases Act, proposed in 2014 and 2015 to unlock emergency government funding.

Global warming is a major contributor to marine disease outbreaks. Some species escape high temperatures temporarily by heading north for cooler water, but many — including abalone, sea snails and sea stars — cannot move. Some species of sea stars appear to developed immunity to sea star wasting disease, but others, including the magnificent sunflower stars that grow up to a meter across, did not, and their populations collapsed.

The salmon industry in British Columbia has been a multi-million dollar industry for at least a century. Overfishing, pollution and built developments interfere with the fishes’ ability to reach their spawning grounds drastically reducing salmon populations. In the Fraser River, four of five salmon species have declined by up to 95 percent since 1980. In one section of the river the water temperature was 20.6 degrees in August 2016, 2.5 degrees higher than normal. Such temperatures can kill salmon outright, even when no disease is present.

Farmed salmon, which now exceed wild salmon in numbers and profitability, are promoted as a sustainable way to save wild fish and feed the world’s growing population, and the PR departments for aquaculture strenuously deny that marine farms infect wild fish. But it is undeniable that fish farms spend a lot of time and money fighting disease, because they concentrate large numbers of fish in relatively small areas. Any outbreak can spread beyond the boundaries of tanks or nets because disease-causing bacteria moves with water.

As well, farmed fish often escape. Harvell’s examples show that mass escapes happen when profit is put before the expense of maintenance and repair of fish pens. Farmed fish can carry disease to wild stocks but they also breed with wild fish, producing offspring that are genetically less able to survive in open waters.

Harvell doesn’t suggest any radical answers to the crises she describes, beyond hope that research and technology will ultimately save our planet and its oceans. But the evidence she offers strengthens the case for a fundamental challenge to the system behind all this destruction, for a break from the drive for profit. When this is achieved we will be able to nurture our environment and its species in a convivial co-existence. Without such changes, we won’t stop the heat events that are killing large parts of our planet. Abalone, salmon and sea stars will disappear and the world as a whole will be far less hospitable for most other species, as well.