A compelling first-hand study shows that fishing is a deadly occupation because capitalism forces workers to take terrible risks in order to survive. 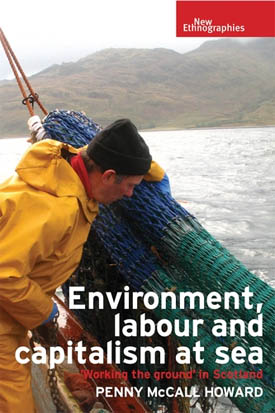 Working at sea in the fishing industry is 115 times more dangerous than the UK average. It’s a startling statistic, that is usually explained by the idea that the sea is “dangerous.” Penny McCall Howard’s important book is a detailed examination of why this explanation is incorrect .

More than that, it is a brilliant study of the lives of those on the west coast of Scotland who making a living from the sea. Howard shows how human labor is part of shaping an ecology which is far wider than just the “prawn monoculture” they fish.

Many of the classic works of anthropology are written by observers who maximize their distance from their subject. In his classic studies of the Nuer people of Southern Sudan, E.E.Evans-Pritchard wrote detailed accounts of his subject’s lives, but always remained an observer.

Howard too is an outsider, but she doesn’t remain aloof from the fisher communities that she is writing about. An accomplished sailor she works with the men (they are all men), joining their small fishing boats or working on trawlers. As such, this is an intimate account of labor at sea, and how it is shaped by wider environment and economy.

“I focus on people’s labor as what ties environments, people and tools together as they work to make dishing grounds productive. I take a phenomenological approach that focuses on people’s experience of their own labor, including the results of that labor, and the aspirations and hopes that they pour into it. As a result, this book challenges the popular conception of the sea as a hostile wilderness…. I explore the more complicated reasons why human-environmental relations at sea are fraught with ruptures, tensions and contradictions, tragedy, unfulfilled hope and even desperation.”

Howard says that in the communities she studied, fishers feel in “a state of siege.”  One fisher told her that “if you are trawler-man you think everyone is out to get you.” This should be of no surprise — one consequence of heightened environmental awareness in the general population is an understanding that we are facing a biodiversity crisis and this is commonly understood to be particularly an issue for sea-life.

Indeed the week I write this review the Guardian carries an article by George Monbiot which has the unfortunate headline “Stop eating fish. It’s the only way to save the life in our seas.” It’s hard to see any of those who Howard writes about here as seeing this as anything but an assault on their livelihoods.

Howard begins with the nature of labor at sea, tracing it’s impact on the environment, the process of shaping the “grounds” themselves and how wider, social relations, transform that experience. In one anecdote, she notes how an experienced fisher complains about having to go to the toilet at sea in a bucket, while the owner has spent tens of thousands on new navigation equipment to improve his chance at a profit.

All workers become intimate with their environments – whether it is a computer network, a phone call center, the fields an agricultural workers frequents or fishers who “work the ground.” The word “ground” is important. Howard says that she has noted more than 80 uses of the word — far more than just the sea-bed. Instead,

“what linked these places was the productive labor that took place in them. The ground was a place that afforded fishermen better catches and where they found their work to be productive. The affordances of grounds were not static and they were historically inextricably connected to the labor expended there.”

Crucially, she continues, “fishermen re-shaped the affordances of grounds through their work and developed new tools in order to further develop the affordances of grounds.” It brought to mind Marx’s statement that “labor is, first of all, a process between man and nature, a process by which man, through his own actions, mediates, regulates and controls the metabolism between himself and nature.”

Howard shows  the complex relationship fishers have with the grounds they work. To understand their labor as simply bringing fish on-board a ship in a net is to misunderstand the intimate relationship with the sea. This is not a romanticized view of life on-board ships, rather its the way that years of experience allow the fishers to develop very clear understanding of the sea, its tides, its depth and the seabed. Using this information (often obtained through careful watching of equipment screens, but also through feeling the vibrations of the boat and its equipment) workers are able to make decisions about how, where and when to fish.

Some areas might bring a bigger catch, but be risky for expensive equipment, other places might bring smaller fish in bigger quantities which require more labor to prepare. All of these decisions take place in the context of the wider, capitalist, market which might mean a fish that was extremely valuable one week is almost worthless the next. Grounds then, “are places where affordances are intentionally developed in particular social and economic context, and through often improvised actions with particular conditions of satisfaction.”

Drawing on the work of environmental geographer Neil Smith, who argued that humans “create nature,” Howard shows how fishers’ labor transforms the environment. For instance, she quotes one fisher saying “if you come across a piece of ground with a lot of skate, first you have to fish them off, and that’s when you will find you start to get a good fishing of prawns.” Howard continues: “Trawler skippers saw themselves as intervening in ecosystems to make them more productive of the prawns or crabs they fished for.”

Thus those critics who might simply see the fishing industry as exploiting a pristine environment are incorrect. Fishers are part and parcel of shaping the ecology that they labor in. In fact, fishers almost always see their labor as making a positive contribution. That is not to suggest that the consequences might not be destructive, but to show how the actual catching of prawns is the result of wider social interactions.

This was drawn out for me by Howard’s discussion of the working practice of the skippers of the boats she worked on. They would often keep up a constant radio and ‘phone chatter with other skippers, sharing information with others. So the work was intensely co-operative — a “community of practice” as Howard puts it.

But skippers could also conceal and hide information. They might be fearful that someone else would undermine their catch at the market, or get fish that they might want. So wider capitalist social relations shape the relations between the working boats and their crew. Something also seen in Howard’s brilliant discussion of technology — as alluded to earlier, technology at sea is usually about maximizing profits, not improving the lives of those who work there. I don’t have space to draw this out further, but Howard’s conclusion is important. Technology, she explains, arises out of and then shapes, the industry:

“The effects of technologies must be examined in the context of the transformation of sea creatures into valuable commodities with a variable price in faraway markets, and the alienation of fishing crew from any ownership relation with a boat and from the sea as a source of reliable livelihood.”

This is also true of the relations between workers. Technology allows the better exploitation of the environment, but it also means that the job becomes more deskilled, and boat owners can employ cheaper labor. The final chapters of the book look at what this has meant for communities and crew, particularly through the hiring of immigrant workers on very low wages.

Class differences have, as Howard is careful to emphasize, always existed in the fishing industry, so the system of shares that determines pay rates on many boats doesn’t arise out of some historical communal system, but out of a system of multiple ownership of boats. Today that means that crew will often receive low pay for long hard work, and sometimes get nothing if the trip itself is not profitable. It is a system open to exploitation, and one where it is difficult for workers to organize collectively.

This returns me to my starting point. The horrifically high level of deaths and injury in the fishing industry is not the result of accidents. It is a consequence of the job “as currently organised” where boat owners cut corners on maintenance and safety to maximize profits, or crew must risk going to sea in a extreme conditions in order to make enough money to pay rent or loans.

Returning to the work of Neil Smith, Howard shows how the “ideology of nature” means that the natural world is seen as outside the lived reality of people — something to be used and exploited. But capitalism makes the sea more dangerous for workers. As Howard points out the idea of a “hostile and dangerous sea naturalizes the deaths of those working on it, no matter what the real cause.” Deaths are seen as a result of the sea itself, not the system that exploits those who work it in the quest for profits.

Environment, Labour and Capitalism at Sea is a remarkable work. It’s a first rate piece of Marxist anthropology that puts human labor at the center of a discussion about ecology. It shows how the biodiversity crisis in the oceans is related to wider social relations, and emphasizes again how the fight to prevent environmental destruction requires challenging the priorities of the system — not just changes to our diet. For radical environmentalists and Marxist ecologists this should be a required read, and I’m pleased to see that a more affordable paperback is to be published in October.