Decades ago, he showed that environmental, energy and economic crises had a common cause: a system that demands increased profits at all costs 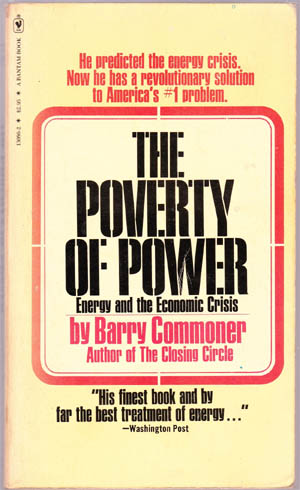 Martin Empson, a frequent C&C contributor, regularly reviews new and old books on his blog, Resolute Reader. Recently, he reviewed Barry Commoner’s 1971 classic The Closing Circle, calling it “an important contribution to our understanding of the struggle we need.” He says he wishes he had read it years ago.

My only disagreement is with his statement that Commoner was not a Marxist. True, he did not use the label, but I can’t find much in his work that a serious Marxist could disagree with.

Commoner was a remarkably good writer, a scientist and political activist who had a gift for explaining complex ideas clearly and concisely. The Closing Circle is a classic that every ecosocialist should read. Click here to read Martin Empson’s review.

Reading that review spurred me to re-read another of Commoner’s books, The Poverty of Power, published in 1976 when the capitalist world was being shaken by a recession and soaring oil prices. While much of the data and analysis is specific to that period, it did a wonderful job of presenting a radical critique, in terms that would be accessible to any reader. As the excerpts below show, what Commoner wrote is still very relevant today.

Commoner opened The Poverty of Power (which was a mass market paperback, by the way) with this fine account of a social order that puts first things last.

“In the last ten years, the United States — the most powerful and technically advanced society in human history — has been confronted by a series of ominous, seemingly intractable crises. First there was the threat to environmental survival; then there was the apparent shortage of energy; and now there is the unexpected decline of the economy. These are usually regarded as separate afflictions, each to be solved in its own terms: environmental degradation by pollution controls; the energy crisis by finding new sources of energy and new ways of conserving it; the economic crisis by manipulating prices, taxes, and interest rates.

“But each effort to solve one crisis seems to clash with the solution of the others — pollution control reduces energy supplies; energy conservation costs jobs. Inevitably, proponents of one solution become opponents of the others. Policy stagnates and remedial action is paralyzed, adding to the confusion and gloom that beset the country.

“The uncertainty and inaction are not surprising, for this tangled knot of problems is poorly understood, not only by citizens generally, but also by legislators, administrators, and even by the separate specialists. It involves complex interactions among the three basic systems — the ecosystem, the production system, and the economic system — that, together with the social or political order, govern all human activity.

“The ecosystem — the great natural, interwoven, ecological cycles that comprise the planet’s skin, and the minerals that lie beneath it — provides all the resources that support human life and activity.

“The production system — the man-made network of agricultural and industrial processes — converts these resources into goods and services, the real wealth that sustains society: food, manufactured goods, transportation, and communication.

“The economic system — the recipient of the real wealth created by the production system — transforms that wealth into earnings, profit, credit, savings, investment, taxes; and governs how that wealth is distributed, and what is done with it.

“This is the rational ideal. In actual fact the relations among the three systems are the other way around. The . environmental crisis tells us that the ecosystem has been disastrously affected by the design of the modem production system, which has been developed with almost no regard for compatibility with the environment or for the efficient use of energy: Gas-gulping cars pollute the environment with smog; petrochemical factories convert an unrenewable store of petroleum into undegradable or toxic agents. In turn, the faulty design of the production system has been imposed upon it by the economic system, which invests in factories that promise increased profits rather than environmental compatibility or efficient use of resources. The relationships. among the great systems on which society depends are upside down.

“Thus, what confronts us is not a series of separate crises, but a single basic defect — a fault that lies deep in be design of modern society.”

Throughout The Poverty of Power, Commoner brilliantly expanded on those ideas, showing that “our current crisis is a symptom of a deep and dangerous fault in the economic system.” He concluded with these words.

“Here we come to the end of the blind, mindless chain of events that transformed the technologies of agricultural and industrial production and reorganized transportation; that increased the output of the production system, but increased even more its appetite for capital, energy, and other resources; that eliminated jobs and degraded the environment; that concentrated the physical power of energy and the social power of the resultant wealth into ever fewer, larger corporations; that  has fed this power on a diet of unemployment and poverty. Here is the basic fault that has spawned the environmental crisis and the energy crisis, and 1 that threatens — if no remedy is found — to engulf us in the wreckage of a crumbling economic system.

“Now all this has culminated in the ignominious confession of those who hold the power: That the capitalist economic system which has loudly proclaimed itself the best means of assuring a rising standard of living for the people of the United States, can now survive, if at all, only by reducing that standard. The powerful have confessed to the poverty of their power.

Every socialist with an interest in environmental issues (and that ought to be every socialist!) can benefit from reading Barry Commoner. Although his books are out of print, they can be found in libraries, and used copies are readily available online at reasonable prices.

For more about Commoner’s idea, and an overview of his major works, see Barry Commoner and the Great Acceleration.