“If the environment is polluted and the economy is sick, the virus that causes both will be found in the system of production. And that is where their cure can be found as well.” 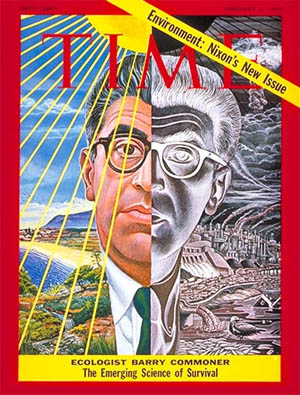 Barry Commoner, “a leader among a generation of scientist-activists” (New York Times) and possibly “the greatest environmentalist of the 20th century” (Ralph Nader), died in New York on September 30, aged 95.

Credited as a founder of the modern environmental movement, Commoner was among the world’s best known ecologists in the 1960s, 70s and 80s. He was famous for his public campaigns against nuclear testing, chemical pollution and environmental decay.

In 1970, Time featured Commoner on its cover, calling him “The Paul Revere of Ecology,” after the American revolutionary hero Paul Revere, who famously warned the rebel militia about approaching British forces before a decisive battle. Time said he had “probably done more than any other US scientist to speak out and awaken a sense of urgency about the declining quality of life.”

But Commoner was far more than a Paul Revere — the person sounding the early environmental alarm. A biology professor and founder of Center for the Biology of Natural Systems at Washington University, St Louis, his biographer Michael Egan says Commoner practically invented the science information movement, “a method of communicating technical information so that the public could better participate in complex social, political, and environmental debate.”

Over several decades, he also took part in many grassroots environmental campaigns. His research into the health impacts of atmospheric nuclear testing is credited with leading to the 1963 international treaty that banned it. He repeatedly spoke out for the most common victims of industrial pollution: poor, Black and working class communities.

But he combined this activity with a radical argument about the root cause of ecological crisis, which he said was a system of production based on private profit instead of ecological and human need. Commoner said in his 1971 book The Closing Circle:

“We are in an environmental crisis because the means by which we use the ecosphere to produce wealth are destructive of the ecosphere itself. The present system of production is self-destructive; the present course of human civilisation is suicidal.”

Commoner’s argument that production for profit was the key cause of environmental destruction set him apart from the liberal wing of the US environment movement, which had emerged as a new political force by the early 1970s. “At a time when most writers were blaming individual behaviour or overpopulation for pollution,” writes Canadian ecosocialist Ian Angus, “Commoner exposed the role of capitalism and profit.”

This led Commoner to challenge the notion that environmental problems can be overcome through purely environmental campaigns. In a tribute to Commoner, The Nation’s Peter Dreier said:

“Commoner linked environmental issues to a broader vision of social and economic justice. He called attention to the parallels among the environmental, civil rights, labor and peace movements. He connected the environmental crisis to the problems of poverty, injustice, racism, public health, national security and war.”

At a lecture in Berkeley, California, in 1973, Commoner said no permanent environmental solutions are possible without deep social changes:

“When any environmental issue is pursued to its origins, it reveals an inescapable truth – that the root cause of the crisis is not to be found in how men interact with nature, but in how they interact with each other – that, to solve the environmental crisis we must solve the problems of poverty, racial injustice and war.”

Commoner is best known for his four “laws of ecology”, which he outlined in the first chapter of The Closing Circle. These are: 1) Everything is connected to everything else; 2) Everything must go somewhere; 3) Nature knows best; and 4) There is no such thing as a free lunch.

The first law states what Commoner called “a simple fact about ecosystems” — all healthy ecosystems are interconnected and self-stabilising: if any part of a natural ecosystem is damaged or overstressed it can trigger far wider problems. For example, the burning of fossil fuels is overloading the global carbon cycle, which in turn is triggering dramatic changes to climate, global ice cover, weather patterns, ocean acidification, farming yields, sea levels, government budgets and worldwide refugee figures. Any society that ignores Commoner’s first law – that everything is connected to everything else – invites ecological and social turmoil.

Of the second law — everything must go somewhere — Commoner said:

“One of the chief reasons for the present environment crisis is that great amounts of materials have been extracted from the Earth, converted into new forms, and discharged into the environment without taking into account that ‘everything must go somewhere’. The result, too often, is the accumulation of harmful amounts of material in places where, in nature, they do not belong.”

Commoner’s third law of ecology – nature knows best – is not an example of naive, green romanticism, but a rejection of what he called “one of the most pervasive features of modern technology … the notion that it is intended to ‘improve on nature.'” Rather, he said: “Stated baldly, the third law of ecology holds that any major man-made change in a natural system is likely to be detrimental to that system”.

Commoner said he borrowed his fourth law — there is no such thing as a free lunch — from economic science:

“In ecology, as in economics, the law is intended to warn that every gain is won at some cost. In a way, this ecological law embodies the previous three laws. Because the global ecosystem is a connected whole, in which nothing can be gained or lost and which is not subject to overall improvement, anything extracted from it by human effort must be replaced. Payment of this price cannot be avoided; it can only be delayed. The present environmental crisis is a warning that we have delayed nearly too long.”

Commoner was also a key figure in the environmental movement’s debates about the relationship between population size and environmental decay. He took issue with Paul Erhlich’s 1968 book The Population Bomb, which said human population growth was the most important environmental issue and argued for drastic population control measures to avoid a planetary overload.

“In my opinion, population trends in the US cannot be blamed for the deteriorated condition of the environment … Of course, if there were no people in the country there would be no pollution problem, but the fact of the matter is that there simply has not been a sufficient rise in the US population to account for the enormous increase in pollution levels … It is a serious mistake to becloud the pollution issue with the population, for the facts will not support it.”

He later told a meeting at Brown University that “pollution begins not in the family bedroom, but in the corporate boardroom”.

“Commoner’s key argument [with Ehrlich] was that the [20th century] pollution explosion was driven not by increased population, but by changed industrial and agricultural production – by radical changes in the way things were made and grown, in the raw materials used, and in the products themselves. Those changes were adopted by industry during and after World War II because the new technologies were more profitable than the old ones …

“In short, poverty was the cause of rapid population growth in the twentieth century, not an effect-and poverty itself was the result of centuries of colonialist plunder. Pressuring poor countries into reducing their birth rates without the improved living standards that enable lower death rates and infant mortality, Commoner wrote, is a ‘gigantic and questionable experiment’.”

Commoner was a sharp critic of the Soviet-style bureaucratic socialist states, which left a horrendous environmental legacy. But he held a vision of democratic socialism, where people and planet trumped corporate power. He said in his 1976 book The Poverty of Power:

“The energy crisis and the web of inter-related problems confront us with the need to explore the possibility of creating a production system that is consciously intended to serve social needs and that judges the value of its products by their use, and an economic system that is committed to these purposes. At least in principle, such a system is socialism.”

Despite his wide audience and influence, Commoner’s ecological critique of capitalism fell out of favour in mainstream environmental circles and his warnings about the profit motive where not heeded. By 2000, Australian writer Sharon Beder could say: “The fact is that many environmentalists have been persuaded by the rhetoric of free market environmentalism. They have accepted the conservative definition of the problem, that environmental degradation results from a failure of the market to attach a price to environmental goods and services.”

But the past few decades of free market environmentalism have failed to deal with our environmental problems, which are now worse than ever. The dismal record of such market-based responses suggest it’s time to return to Commoner’s conclusion:

“If the environment is polluted and the economy is sick, the virus that causes both will be found in the system of production. And that is where their cure can be found as well.”