Proposals to remove all humans from half of the Earth ignore the root causes of the biodiversity crisis and undermine progressive struggles for social justice. 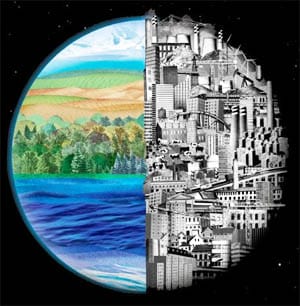 Proposals to remove all humans from half of the Earth ignore the root causes of the biodiversity crisis and undermine progressive struggles for social justice.

Brian Napoletano teaches environmental geography at the Universidad Nacional Autónoma de México, and is a member of the Partido Revolucionario de los Trabajadores. He posts both academic and non-academic work on his website.

Today’s biodiversity crisis is far more serious than past mass extinctions. It is unfolding far more rapidly, is mostly caused by a few members of one species, and is accompanied by other profound changes to the Earth system, from novel ecosystems and organisms to anthropogenic climate change. Conservation has achieved some local successes, but globally it has not even slowed the increasing pressure on biodiversity.

Conservationists have always been divided between ecocentric “preservationists” who advocate protecting nature for its own sake, and anthropocentric “utilitarians” who favor conserving biodiversity for its benefits to humans. The advent of the Anthropocene has intensified this debate, with utilitarians arguing that wilderness no longer exists (if ever it did), and preservationists arguing that the scale of global changes caused by humans makes wilderness preservation and rewilding more important than ever. Wilderness preservation and biodiversity conservation are not synonymous, but advocates of the former usually claim that it is also the most efficient and effective way to achieve the latter.

Not surprisingly, this polarized debate excludes or distorts many alternative positions, most importantly that of ecological Marxists and others who consider human welfare the primary objective, but oppose equating it with capital accumulation, and are still concerned about the fate of nature in its own right. The recent intense and polemical debate over proposals to place half the Earth’s surface in protected areas shows how this important alternative position is routinely distorted or sidelined.

The idea of setting half of some area aside for nature is not new, and builds on general concepts of island biogeography, species-area relationships, dispersion, etc. Preservationists drawing on deep ecology, such as The Wildlands Project, have advocated setting aside half of North America for wilderness since at least 1992. More recently, a group called Nature Needs Half (NNH) has been arguing that humans should withdraw from half of the entire Earth by 2050. Major conservation groups such as the International Union for Conservation of Nature (IUCN) have backed the proposal. In 2017, sociobiologist E.O. Wilson popularized this proposal in his book, Half-Earth, which has received extensive media coverage and support from conservationists.

Social scientists with firsthand knowledge of preservation areas caution that this half-Earth proposal will likely do more harm than good by exacerbating conflicts while leaving the underlying drivers of biodiversity loss untouched. In response, a group of preservationists affiliated with or sympathetic to NNH — including well-known populationists like Philip Cafaro, Eileen Crist, and Reed Noss, with Helen Kopnina as their most vociferous spokesperson — claim that their project makes “due consideration for the rights and interests of the world’s poor and indigenous peoples,” but argue that the real issue is a “battle of worldviews between anthropocentrism and ecocentrism.”

In their view, all critical social scientists who object to the half-Earth proposal are guilty of “human speciesm,” and are guided by a “neo-Marxist worldview … supporting ‘mastery over nature’.” In addition to revealing the ignorance of some conservationists about Marxism and social science, such obviously false ecological red-baiting undermines the serious debate and “deep consideration” that Jonathan Baillie and Ya-Ping Zhang argue is due to a proposal that “will determine the fate of millions of species and the health and well-being of future generations.”

Beyond vitriolic rhetoric, the NNH argument rests on three dubious premises that are usually asserted rather than argued:

(1) All humans share equal responsibility for the biodiversity crisis;

(2) The rights of nature circumscribe the needs of humans;

(3) The half-Earth proposal is the only way to resolve the crisis, and therefore is morally imperative.

The first premise entails a race-free, gender-free, class-free species identity in which all humans are assigned equal responsibility for “transgressing the rights of nature”, regardless of historical and geographical reality. Analysis of actual class divisions and conflicts is rejected, because “continuous accent on internal strife and differences between human populations, serves to disable the idea of collective blame for destruction of nature.” Calls for an actual classless society, however, are “naïve at best, and more likely dangerous, as illustrated by the lessons of the Russian revolution,” because class conflicts and divisions are hard-coded into human DNA and inevitable in “the world of competition for limited resources,” so “the solution of overthrowing the elites is not available.”

By this reasoning, the Standing Rock Sioux and Exxon share equal blame for the biodiversity crisis, and dispossessing the former in the name of wilderness preservation is no more objectionable (morally or legally) than doing so to the latter.

Indeed, Kopnina vehemently rejects special consideration for indigenous or other victims of European colonialism’s brutal legacy as “political correctness motivated by post-colonial guilt” because neither indigenous communities nor “more recent settlers” can “claim preeminence over other species in areas they migrate to.”

This disdain for anti-colonial struggle lays the groundwork for Noss’s assertion that “the native ecosystem and the collective needs of non-human species must take precedence over the needs and desires of humans” because humanity  is “both more adaptable and more destructive than any other.”

The counterpart to this misanthropic approach is the argument that nature has intrinsic value, a normative “objective good” that “was here long before us and will outlive us.” NNH  advocates use this claim to trump objections to the harms wilderness preservation may cause to humans. But the conception of nature having inherent value, be it of the mystical sort offered by advocates of NNH or one that recognizes humans as the valuers, is necessarily mediated through social  institutions and relations. These include the natural sciences that define categories such as species and extinction,  and the environmental sciences where the biodiversity crisis and its underlying drivers are studied.

As critics of Wilson’s sociobiology have repeatedly emphasized, assuming that the natural sciences provide an unbiased and perfect lens on reality is truly “naïve at best, and more likely dangerous.” The metaphors used in the natural sciences to understand nature are rooted in social-political concepts. Thus, capital’s bellum omnium contra omnes (war of all against all) is seen as a result of  “human nature” rather than as a product of historically-evolved social relations.

This naïve positivism also leads NNH’s advocates to claim that “all species have a right to continued existence” as an absolute moral principle, even though all evolutionary history says otherwise, and despite deep disagreements among scientists about what exactly constitutes a species and what the concept describes in nature. Moreover, this ethical framing imposes a moral obligation on humans as just one species among many that depends precisely on the fact that humans are not just like any other species, but have an unmatched  capacity for reasoning, suffering, and empathy that suggests human needs may legitimately take precedence over those of other organisms.

Conversely, recognizing humans as the exceptional case of nature becoming conscious of itself provides a way out of the artificial anthropocentric vs. eco-centric dichotomy. It suggests that humans can consciously impute non-instrumental value to the rest of nature, so that concern for other organisms expresses our shared humanity, rather than a divine mandate imposed from outside by the priests of deep ecology.

The third NNH premise is only valid if the half-Earth proposal can actually resolve the biodiversity crisis, by addressing underlying drivers as well as the immediate issues. Advocates of NNH claim that placing half the planet in protected areas does this by forcing capital to adjust to using half the material and energy resources formerly at its disposal. More importantly in their view, it will impel immediate stabilization and reduction of human population.

While there is a legitimate case for preservation areas as part of a conservation strategy, the idea that they can undo capital’s inherent need for growth is beyond naïve. Only voluntary ignorance of capitalism’s fundamental dynamics could lead one to believe that capital’s growth imperative is just a cultural phenomenon, that capital can somehow be convinced to contract without offering violent resistance or descending into a profound crisis.

In cases where implementing preservation areas entails dispossessing local communities, the stated objectives are further undermined, in the short-term by displacing communities that could otherwise contribute to conservation, and in the long-term by exacerbating alienation from the land and nature, intensifying the rift between humanity’s social metabolism and the universal metabolism of nature.

The “market biocentrism” that Wilson proposes and NNH’s defenders advocate is even more contradictory and self-defeating.  Market competition under monopoly capitalism clearly does not lead to more efficient material and energy use, because much of both is wasted on the marketing effort, and because the growth imperative counteracts efficiency gains by increasing production (the Jevons paradox). Moreover, regulating markets “to protect biodiversity (e.g. via an allocated monetary value for biodiversity” directly contradicts the principle of intrinsic value by subjecting biodiversity to the anthropocentric system of instrumental valuation par excellence.

The claim that population growth is the ultimate cause of biodiversity loss, and the corollary that focusing on population reduction must be a mandatory strategy, has been so thoroughly refuted that it hardly bears further discussion. (See Too Many People? by Ian Angus and Simon Butler, and several articles here).

This populationist argument is used to justify the position that nothing can or should be done to challenge the existing capitalist order. It also misrepresents radical critiques by suggesting that they view inequality as the ultimate driver of biodiversity loss, rather than inequality rooted in the antagonistic class structure of capitalist society. NNH’s proponents ally with dark currents of nativist and anti-immigrant sentiment and argue that poverty reduction in the South and immigration to the North will make things worse. Even more perversely, they argue that population control in the South is an appropriate way to make up for failures to reduce excessive consumption by corporations and the wealthiest consumers in the North.

The half-Earth project involves unavoidable opposition between conservation and virtually any progressive social struggle. It gives reactionary opponents of such struggles another weapon in the ongoing class war, while also feeding their efforts to foment popular opposition to conservation. The failure of NNH’s advocates to see the logical connection to progressive struggle is amply demonstrated in their failure to recognize that the same capitalist system responsible for the instrumental valuation of nature also reduces the lives of the exploited classes to the same crude standard. Progressive social struggle is part of nature’s (in the broader sense including humans) fight against instrumentalism.

Recognizing this intrinsic relationship, which is obscured by the anthropocentric vs. ecocentric dichotomy, points towards a co-revolutionary struggle against a system that subordinates all life to capital accumulation.

Of course, that struggle does not automatically guarantee that biodiversity will be protected, but it is necessary if society is to begin seeking alternative forms of valuation.

Rejecting any alternative to capitalism only ensures that oppression, suffering, and injustice for most of the planet’s human and non-human inhabitants will continue. The truly relevant dichotomy here is the one posed by Rosa Luxemburg more than a century ago, between worsening barbarism under capitalism, or the possibility of liberation through socialism.