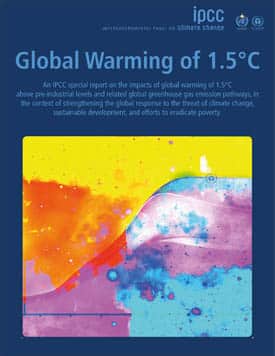 Global Warming of 1.5°C, a major new report from the Intergovernmental Panel on Climate Change (IPCC),  was released in Korea on October 8. Although it is nearly 800 pages long and includes more than 6,000 scientific references, it can be summarized in five sentences:

C&C will have more to say about this report in future. For now, here’s a sampling of comment from scientific journals and the mainstream media, which is reporting the climate story more accurately than usual. Based on experience to date, politicians and their capitalist paymasters will not respond appropriately unless we mobilize and force them to act.

“Allowing the planet to warm by more 1.5 degrees Celsius could have dire consequences. … We have to alter course immediately; no longer can we say the window for action will close soon ‑‑ we’re here now.”

“Limiting global warming to 1.5 °C above pre-industrial levels would be a herculean task, involving rapid, dramatic changes in the way that governments, industries and societies function.”

“Half a degree can make a world of difference. If Earth warms by just 1.5 degrees Celsius over preindustrial times by 2100, rather than 2 degrees, we would see fewer life-threatening heat, drought and precipitation extremes, less sea level rise and fewer species lost.”

CNN
Planet has only until 2030 to stem catastrophic climate change, experts warn

“The world’s leading climate scientists have warned there is only a dozen years for global warming to be kept to a maximum of 1.5C, beyond which even half a degree will significantly worsen the risks of drought, floods, extreme heat and poverty for hundreds of millions of people.”

“Limiting warming to 0.9 degrees from now means the world can keep ‘a semblance’ of the ecosystems we have. Adding another 0.9 degrees on top of that – the looser global goal – essentially means a different and more challenging Earth for people and species”

Washington Post
The world has just over a decade to get climate change under control, U.N. scientists say

“To avoid racing past warming of 1.5 degrees Celsius (2.7 degrees Fahrenheit) over preindustrial levels would require a ‘rapid and far-reaching’ transformation of human civilization at a magnitude that has never happened before.”

“Avoiding the most serious damage requires transforming the world economy within just a few years, said the authors, who estimate that the damage would come at a cost of $54 trillion.”

“Rapid, far-reaching changes to almost every facet of society are needed to avoid catastrophic climate change, reforms far beyond anything governments are currently either doing or planning to do.”

“The world must invest $2.4 trillion in clean energy every year through 2035 and cut the use of coal-fired power to almost nothing by 2050 to avoid catastrophic damage from climate change, according to scientists convened by the United Nations.”