In ‘The New Wild,’ Fred Pearce argues nature will restore itself if we just leave it alone. Is passive acceptance really the best response to biodiversity loss? 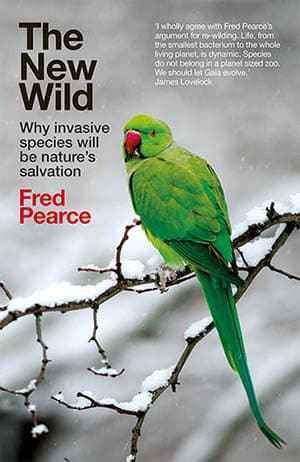 Fred Pearce has been a longstanding writer and science journalist on ecological questions, and any book by him deserves a serious consideration by radicals and environmentalists. His books have covered topics as diverse as the population question and landgrabbing, and he has a new book out discussing nuclear power. This 2015 book looks at biodiversity and in particular the question of invasive species.

Why I was writing Land and Labour one of the people who read the first draft insisted that I should change the word “alien” when describing species that entered habitats from where they were not normally found. That reader was absolutely right to do so and Pearce’s book shows why (though he uses the word himself). Alien implies outsider, but species have constantly moved around. Pearce explains that there is no pristine nature, unchanged since the beginning of time. Rather nature has constantly evolved, adapted and changed. Species come and go, and while humans have been part of doing this, through deliberate planting or accidental transportation, this process is also a natural one.

Pearce gives a number of fascinating examples of the natural processes — from animals and plants that have moved across the oceans, to the colonization of a brand new island created off the coast of Iceland. But humans have a particular socialized view of nature, and that means we often reject, or fear, intruders. But, as Pearce explains, what we think of as natural nature, is often anything but:

“We forget that much that appears lovably native is actually foreign. Some vagabond species that we like can become so much part of the landscape that they get local names and even become adopted natives. In the US, old-world meadowgrass was renamed Kentucky bluegrass. Tumbleweed sounds quintessentially American — a metaphor of ghost towns in Western movies as it rolls across the landscape in the wind. But the most common tumble weed species is not native at all. Salsola tragus, Russian thistle, was brought by Ukrainian immigrants in flax-seed.”

When I was young every public building in the UK was festooned with posters warning of the dangers of the Colorado beetle. Today some local councils warn of the threat from Japanese Knotweed and Pearce’s book lists numerous others. Pearce challenges the idea that invasive species like these are as dangerous as the authorities suggest. Often, for instance, such species actually do not spread as far as portrayed, and very often they prefer “disturbed land” such as brown field sites. But, as Pearce concludes, “they rarely invade the countryside” and “some natives are a much greater nuisance. Bracken, brambles, stinging nettles and ivy are all natives… If they were foreign there would be a hue and cry…. Imagine if the stinging nettle was an alien.” One scientist quoted by Pearce “found that the locals caused four times more damage to local woodland biodiversity than the aliens.”

The question of biodiversity is important in this context because one major accusation against invasive species is that they drive out “native” plants and kill biodiversity. But often the opposite is true. Pearce shows that a “usually-cited” source for an “oft-repeated claim” that invasive species are the second greatest threat to biodiversity is not true. More interestingly he shows that such species, “except in rare cases… bring greater biodiversity.” This can be in several ways — new species that enter existing eco-systems and establish a niche, or new species offering existing species new food sources, or toe-holds for protection.” When the Suez Canal opened tropical species moved from the Indian Ocean to the Mediterranean, and 250 species established themselves in new areas, but there was only one recorded extinction.

Pearce isn’t arguing that invasive species do not do harm, create problems, or economic costs. What he is arguing is that they are not the existential threat they are often accused of being, and more often than not they bring benefits. This, after all, is why humans have often transported species around the globe — as food sources, for profit, or even for aesthetic reasons. This is a process that began long before farming took place, and we cannot pretend it did not occur — to do so is to believe that there is a pristine nature that can be recovered, or protected like something trapped in amber.

Pearce argues that part of the problem is that the common understanding of ecology is based on the idea of “balance” between species. This, he says, is wrong. As one scientist Henry Gleason, argued (against the grain) in 1926, “every species of plant is a law unto itself, the distribution of which in space depends on its individual peculiarities of migration and environmental requirements.” In the late 19th century Frederic Clements came up with the idea of a “matching permanent association of vegetation” (Pearce’s words) which he called a climax.

Counter to this Pearce argues that “species evolve to get by, not to attain Clementsian perfection.” Because of the sort of crudities that Pearce argues against, it struck me that many ecologists would benefit from a dialectical understanding of biology, such as that outlined by Levins and Lewontin in The Dialectical Biologist.

Pearce argues a strong case. However, as the subtitle of his book puts it, he sees salvation in the ability of nature itself to repair and build anew. He concludes:

“But the new wild is flourishing, and will do better if we allow it to have its head…. Alien species, the vagabonds, are the pioneers and colonists in this constant renewal. Their invasions will not always be convenient for us, but nature will rewild in its own way.”

This is problematic. Pearce appears to be saying here that we should do nothing, and nature will simply rebuild given time. But Pearce also has numerous examples that show how human action — such as industrial farming — is driving biodiversity loss. He argues that climate change will lead to more destruction of nature, but will simultaneously be “a major driver of species migrations” which will lead to renewal.

In other words Pearce appears to be trying to have his environmental cake, and eat it as well.

What is missing from his analysis is an attempt to locate the environmental crisis within the wider social relations that humanity exists in. While it is true that humans have always altered nature, capitalism has transformed the scale of the transformation, unleashing changes to the environment that are breaking fundamental ecological relations. Eventually, human driven climate change, will likely create feedbacks that can threaten the very existence of life on the planet. I know that Fred Pearce knows this, because he wrote a very good book about it called The Last Generation.

But beware — I am not dismissing Fred Pearce’s book, in fact I encourage people to read it. But I think it’s flawed in its suggestion that “By seeking only to conserve and protect the endangered and the weak, it [conservation] becomes a brake on evolution and a douser of adaptation. If we want to assist nature to regenerate, we need to promote change, rather than hold it back.”

Maybe; but we primarily need to stop fossil fuel capitalism to give nature the space to “regenerate.” In fact Pearce’s dismissal of contemporary conservation reads more like a call to passivity in the face of ecological crisis than a call to action.

Given time, and an end to capitalism, nature will have enormous potential to rebuild damaged regions, part of that will involve invasive species of many sorts and human involvement in moving them. Even today, as Pearce’s book shows, a proper understanding of the ecological relationships between species, can help regenerate areas and protect biodiversity. But this will not happen if we sit back and wait for nature to rewild on its own. That’s a recipe for a world of utter chaos and complete ecological breakdown.

Martin Empson is the author of Land and Labour: Marxism, ecology and human history and Kill All the Gentlemen: Class struggle and change in the English countryside.  This review was first published on his blog, Resolute Reader.