New books: Essays for Richard Levins … The Earth is not for Sale … Defending Howard Zinn … The Rise of Capitalism … Degrowth …  Climate Justice … Below Freezing 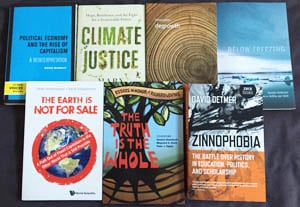 New books: Essays for Richard Levins … The Earth is not for Sale … Defending Howard Zinn … The Rise of Capitalism … Degrowth …  Climate Justice … Below Freezing

Tamara Awerbuch, Maynard Clark & Peter Taylor, editors
THE TRUTH IS THE WHOLE
Essays in Honor of Richard Levins
Pumping Station, 2018
“All theories are wrong that promote, justify or tolerate injustice.” Richard Levins (1930-2016) was an ecologist, evolutionary biologist, philosopher of science, Marxist, and lifelong fighter for a better world. His work provides a framework for the understanding of crises in environment and society and their relationship with capitalism and imperialism. These essays pay him tribute by carrying forward his approach to understanding the dialectics of nature and society.

Peter Schwartzman, David Schwartzman
THE EARTH IS NOT FOR SALE
A Path Out of Fossil Capitalism to the Other World That is Still Possible
World Scientific, 2018
A thought provoking and documented examination of solutions to social and economic inequality, ecological tipping points, and the threat of climate catastrophe, focusing on renewable energy systems, agroecology, and social organization. The authors reject a business as usual approach, and argue that the revolution has already begun.

David Detmer
ZINNOPHOBIA
The Battle Over History in Education, Politics, and Scholarship
Zero Books, 2018
An in-depth defense of the work of radical historian Howard Zinn, author of A People’s History of the United States, against his many critics. Detmer examines the attempt to ban Zinn’s book from Indiana classrooms and Zinn’s views on bias and objectivity in history, and responds in detail to twenty-five of Zinn’s most hostile critics.

David McNally
POLITICAL ECONOMY AND THE RISE OF CAPITALISM
A Reinterpretation
University of California Press, 2018
First published in 1988, McNally’s book argues that changes in agrarian economy, which drove rural producers from their land and refashioned farming as an economic activity based upon the production of agricultural commodities for profit on the market, established the essential relations of modern capitalism.

Giorgos Kallis
DEGROWTH
Agenda Publishing, 2018
Giorgos Kallis provides a clear and succinct guide to the central ideas of degrowth theory and explores what it would take for an economy to transition to a position that enables it to prosper without growth. Whether one agrees or disagrees with him, Kallis raises fundamental questions about the workings of capitalism.

Mary Robinson
CLIMATE JUSTICE
Hope, Resilience, and the Fight for a Sustainable Future
Bloomsbury Publishing, 2018
A stirring manifesto on the most pressing humanitarian issues of our time, focusing on grassroots struggles, mainly led by women women, for a more just and equitable world. The author is the former president of Ireland and UN High Commissioner for Human Rights issues.