Victor Hugo’s masterpiece includes a powerful attack on the urban wastefulness that steals nutrients from the land. Like Marx and Engels, he based his critique on the work of the chemist Justus von Liebig. 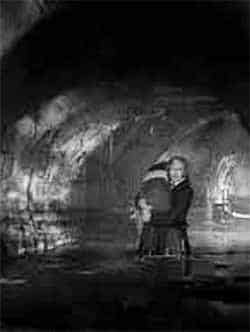 Jean Valjean carries the wounded revolutionary Marius through the sewers of Paris in Les Misérables.

Victor Hugo’s masterpiece includes a powerful attack on the urban wastefulness that steals nutrients from the land. Like Marx and Engels, he based his critique on the work of the chemist Justus von Liebig.

Introduction by Ian Angus — In the 1850s and 1860s, Karl Marx and Friedrich Engels closely studied the works of Justus von Liebig, the German chemist whose books on agricultural chemistry were enormously influential throughout Europe and North America. They were particularly impressed by his analysis of soil fertility, in which he sharply criticized the use of artificial fertilizers and guano imported from Peru, while hundreds of tons of human excrement was dumped into rivers and the sea. As Marx wrote in 1860, “Liebig rightly criticises the senseless wastefulness which robs the Thames of its purity and the English soil of its manure.”

This “irreparable rift in the interdependent process of social metabolism” formed the basis of their critique of capitalist agriculture, and provides the theoretical starting point for what is now known as metabolic rift theory.

Marx and Engels were not the only social critics to adopt and build on Liebig’s views about agriculture and sewers. Another was Victor Hugo, who is widely considered to be the greatest French novelist of the nineteenth century. The word ecological didn’t yet exist in his time, but his 1862 masterpiece Les Misérables included what can only be called a powerful ecological challenge to the wastefulness displayed in Europe’s second-largest city, Paris. His statement deserves to be better known, as a call for a sustainable society, and as a precursor of today’s ecosocialist critique of capitalism.

THE LAND IMPOVERISHED BY THE SEA

Twenty-five millions is the most moderate approximative figure which the valuations of special science have set upon it.

Science, after having long groped about, now knows that the most fecundating and the most efficacious of fertilizers is human manure. The Chinese, let us confess it to our shame, knew it before us. Not a Chinese peasant — it is Eckberg who says this, — goes to town without bringing back with him, at the two extremities of his bamboo pole, two full buckets of what we designate as filth. Thanks to human dung, the earth in China is still as young as in the days of Abraham. Chinese wheat yields a hundred fold of the seed. There is no guano comparable in fertility with the detritus of a capital. A great city is the most mighty of dung-makers. Certain success would attend the experiment of employing the city to manure the plain. If our gold is manure, our manure, on the other hand, is gold.

What is done with this golden manure? It is swept into the abyss.

Fleets of vessels are despatched, at great expense, to collect the dung of petrels and penguins at the South Pole, and the incalculable element of opulence which we have on hand, we send to the sea. All the human and animal manure which the world wastes, restored to the land instead of being cast into the water, would suffice to nourish the world.

Those heaps of filth at the gate-posts, those tumbrils of mud which jolt through the street by night, those terrible casks of the street department, those fetid drippings of subterranean mire, which the pavements hide from you, — do you know what they are? They are the meadow in flower, the green grass, wild thyme, thyme and sage, they are game, they are cattle, they are the satisfied bellows of great oxen in the evening, they are perfumed hay, they are golden wheat, they are the bread on your table, they are the warm blood in your veins, they are health, they are joy, they are life. This is the will of that mysterious creation which is transformation on earth and transfiguration in heaven.

Restore this to the great crucible; your abundance will flow forth from it. The nutrition of the plains furnishes the nourishment of men.

You have it in your power to lose this wealth, and to consider me ridiculous to boot. This will form the masterpiece of your ignorance.

Statisticians have calculated that France alone makes a deposit of half a milliard every year, in the Atlantic, through the mouths of her rivers. Note this: with five hundred millions we could pay one quarter of the expenses of our budget. The cleverness of man is such that he prefers to get rid of these five hundred millions in the gutter. It is the very substance of the people that is carried off, here drop by drop, there wave after wave, the wretched out pour of our sewers into the rivers, and the gigantic collection of our rivers into the ocean. Every hiccough of our sewers costs us a thousand francs. From this spring two results, the land impoverished, and the water tainted. Hunger arising from the furrow, and disease from the stream.

It is notorious, for example, that at the present hour, the Thames is poisoning London.

So far as Paris is concerned, it has become indispensable of late, to transport the mouths of the sewers downstream, below the last bridge.

A double tubular apparatus, provided with valves and sluices, sucking up and driving back, a system of elementary drainage, simple as the lungs of a man, and which is already in full working order in many communities in England, would suffice to conduct the pure water of the fields into our cities, and to send back to the fields the rich water of the cities, and this easy exchange, the simplest in the world, would retain among us the five hundred millions now thrown away. People are thinking of other things.

The process actually in use does evil, with the intention of doing good. The intention is good, the result is melancholy. Thinking to purge the city, the population is blanched like plants raised in cellars. A sewer is a mistake. When drainage, everywhere, with its double function, restoring what it takes, shall have replaced the sewer, which is a simple impoverishing washing, then, this being combined with the data of a now social economy, the product of the earth will be increased tenfold, and the problem of misery will be singularly lightened. Add the suppression of parasitism, and it will be solved.

In the meanwhile, the public wealth flows away to the river, and leakage takes place. Leakage is the word. Europe is being ruined in this manner by exhaustion.

As for France, we have just cited its figures. Now, Paris contains one twenty-fifth of the total population of France, and Parisian guano being the richest of all, we understate the truth when we value the loss on the part of Paris at twenty-five millions in the half milliard which France annually rejects. These twenty-five millions, employed in assistance and enjoyment, would double the splendor of Paris. The city spends them in sewers. So that we may say that Paris’s great prodigality, its wonderful festival, its Beaujon folly, its orgy, its stream of gold from full hands, its pomp, its luxury, its magnificence, is its sewer system.

It is in this manner that, in the blindness of a poor political economy, we drown and allow to float downstream and to be lost in the gulfs the well-being of all. There should be nets at Saint-Cloud for the public fortune.

Economically considered, the matter can be summed up thus: Paris is a spendthrift. Paris, that model city, that patron of well-arranged capitals, of which every nation strives to possess a copy, that metropolis of the ideal, that august country of the initiative, of impulse and of effort, that center and that dwelling of minds, that nation-city, that hive of the future, that marvelous combination of Babylon and Corinth, would make a peasant of the Fo-Kian shrug his shoulders, from the point of view which we have just indicated.

Imitate Paris and you will ruin yourselves.

Moreover, and particularly in this immemorial and senseless waste, Paris is itself an imitator.

These surprising exhibitions of stupidity are not novel; this is no young folly. The ancients did like the moderns. “The sewers of Rome,” says Liebig, “have absorbed all the well-being of the Roman peasant.” When the Campagna of Rome was ruined by the Roman sewer, Rome exhausted Italy, and when she had put Italy in her sewer, she poured in Sicily, then Sardinia, then Africa. The sewer of Rome has engulfed the world. This cesspool offered its engulfment to the city and the universe. Urbi et orbi. Eternal city, unfathomable sewer.

Rome sets the example for these things as well as for others.

Paris follows this example with all the stupidity peculiar to intelligent towns.

For the requirements of the operation upon the subject of which we have just explained our views, Paris has beneath it another Paris; a Paris of sewers; which has its streets, its cross-roads, its squares, its blind-alleys, its arteries, and its circulation, which is of mire and minus the human form.

However, the stamp of its power is there also, and the Titanic sink of Paris realizes, among monuments, that strange ideal realized in humanity by some men like Machiavelli, Bacon and Mirabeau, grandiose vileness.

The sub-soil of Paris, if the eye could penetrate its surface, would present the aspect of a colossal coral. A sponge has no more partitions and ducts than the mound of earth for a circuit of six leagues round about, on which rests the great and ancient city. Not to mention its catacombs, which are a separate cellar, not to mention the inextricable trellis-work of gas pipes, without reckoning the vast tubular system for the distribution of fresh water which ends in the pillar fountains, the sewers alone form a tremendous, shadowy network under the two banks; a labyrinth which has its slope for its guiding thread.

There appears, in the humid mist, the rat which seems the product to which Paris has given birth.