Norman Solomon is executive director of the Institute for Public Accuracy, where he coordinates ExposeFacts, and a co-founder of RootsAction.org. 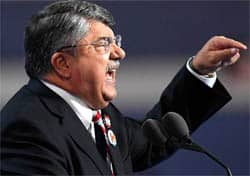 At a meeting with the deputy political director of the AFL-CIO during my campaign for Congress, she looked across her desk and told me that I could get major union support by coming out in favor of the Keystone XL oil pipeline.

That was five years ago. Since then, the nation’s biggest labor federation has continued to serve the fossil fuel industry. Call it union leadership for a dead planet.

Last week, the AFL-CIO put out a statement from its president, Richard Trumka, under the headline “Dakota Access Pipeline Provides High-Quality Jobs.” The rhetoric was standard flackery for energy conglomerates, declaring “it is fundamentally unfair to hold union members’ livelihoods and their families’ financial security hostage to endless delay.”

The Standing Rock Sioux Tribe is steadfast against the Dakota Access pipeline: “We will not rest until our lands, people, waters, and sacred sites are permanently protected from this destructive pipeline.”

In sharp contrast to the AFL-CIO’s top echelon, some unions really want to restrain climate change and are now vocally opposing the Dakota pipeline.

Communications Workers of America has expressed solidarity with members of the Standing Rock Sioux Tribe “as they fight to protect their community, their land and their water supply.”

At National Nurses United, Co-President Jean Ross cites “an obligation to step up climate action to protect public health and the future for the generations to follow us.”

Ross said: “We commend the leaders and members of the Standing Rock Sioux, the many First Nation allies who have joined them, and the environmentalists and other supporters who have participated in the protests against the Dakota Access pipeline.”

NNU points out that “the proposed 1,172-mile pipeline would carry nearly a half million barrels of dirty crude oil every day across four states.” Ross says that such projects “pose a continual threat to public health from the extraction process through the transport to the refinery.”

As for the AFL-CIO’s support for the pipeline, NNU’s director of environmental health and social justice was blunt. “We’re deeply disappointed in our labor federation siding with those that would endanger and harm the land, the water, the lives of the people along the pipeline path and the health of the planet itself in the name of profits,” Fernando Losada said.

He added that the Dakota pipeline is part of “a drive to extract fossil fuel that is untenable for the future of the planet.”

The nurses union is part of the AFL-CIO, but dominant forces within the federation are committed to corporate energy priorities. Losada said that “some elements in the AFL-CIO” have caused a stance that “is a narrow position in the alleged interests of their members for some short-term jobs.”

Compare that narrow position to a recent statement from Communications Workers of America: “The labor movement is rooted in the simple and powerful idea of solidarity with all struggles for dignity, justice and respect. CWA will continue to fight against the interests of the 1% and corporate greed and firmly stand in solidarity with our brothers and sisters of the Standing Rock Sioux Tribe against the environmental and cultural degradation of their community.”

A venerable labor song has a question for the leaders of the AFL-CIO: Which side are you on?

When it comes to planetary survival, the answer from the top of the AFL-CIO hierarchy remains: We’re on the wrong side.