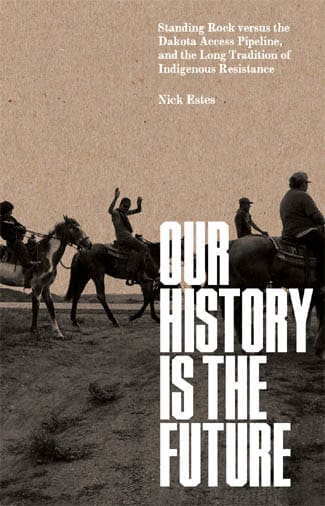 Nick Estes
OUR HISTORY IS THE FUTURE
Standing Rock versus the Dakota Access Pipeline and the Long Tradition of Resistance
Verso Books, 2019

A US district court ruled on July 6 that the Dakota Access Pipeline (DAPL) must be shut down and emptied of oil, pending a full environmental review of the project. In March, the same court found the US Army Corps had wrongfully approved the pipeline in 2016. The Army Corps failed to assess the DAPL’s potential to cause devastating oil spills. Responding to the ruling, Standing Rock Sioux Tribe Chairman Mike Faith said: “This pipeline should have never been built here. We told them that from the beginning.”

The court rulings were a major win for the Standing Rock Sioux Tribe and other Native American and environmental campaigners, which have fought a relentless campaign against the DAPL to protect their land and water. The Indigenous-led coalition faced down a multi-billion-dollar oil company backed by state and federal governments willing to use sustained repression to crush dissent.

Indigenous scholar and activist Nick Estes’ book Our History is the Future, published before the recent court decisions, provides a vivid account of the movement to halt DAPL. But he also explains the current movement’s origins: it continues an unbroken history of Indigenous struggle against colonial settler genocide and the ecological vandalism that goes with it.

The 1712-mile long DAPL was built by the firm Energy Transfer, which includes former US energy secretary Rick Perry among its board members. The pipeline runs oil produced by the fracking industry through four US states North and South Dakota, Illinois and Iowa. It crosses both the Missouri and Mississippi rivers, threatening the water supply of a large area that includes unceded Indigenous territory.

When it was still under construction, the campaign against the DAPL united white farmers and ranchers, environmentalists and American Indian peoples in a lasting coalition. The most intense resistance to DAPL was led by Indigenous peoples, especially at the Oceti Sakowin Camp near the Standing Rock Reservation in North Dakota. At its height the protest camp was home to between 10,000 to 15,000 people.

In 2014, the US Army Corps had rerouted the DAPL to make it pass less than a mile upriver of the Standing Rock Reservation, which lies in North Dakota’s poorest county. Before this, the DAPL’s path was to instead be upriver of the state’s mostly white capital of Bismarck. The Army Corps said the route near Bismarck crossed a “high consequence area” — a consideration not afforded to the people of Standing Rock.

Despite the high likelihood of spills, not to mention the broader ecological and climate issues associated with oil fracking, the DAPL was fast-tracked without review under US environmental laws such as Clean Water Act or the National Environmental Policy Act.

The emergence of the Oceti Sakowin Camp was especially significant because it amounted to “the long-awaited reunification of all seven nations of Dakota-, Nakota-, and Lakota-speaking peoples hadn’t occurred in more than a hundred years, or at least seven generations.”

The state responded violently to this challenge to new fossil fuel infrastructure. North Dakota’s governor declared martial law on August 19, 2016. The Oceti Sakowin Camp was surrounded by barbed wire and attacked repeatedly by the National Guard and militarized police forces.

The movement won some temporary victories, including halting construction of DAPL at the Missouri River under the Obama presidency. But new President Donald Trump reversed this just days after taking office. Following months of injuries and hundreds of arrests the non-violent protesters at the camp were finally evicted by police and the Army Corps in February 2017. Despite this, resistance to the DAPL continued by other means.

Estes credits the influence of other recent Indigenous-led campaigns in North America with helping to cohere the coalition that formed at Standing Rock. Important among these are the campaign to halt the Keystone XL (KXL) tar sands oil pipeline in South Dakota and the powerful Idle No More protests organized by Canadian First Nations peoples.

But Standing Rock is also part of a far longer tradition of resistance.

“Over the last 200 years, the US military has waged relentless war on the Oceti Sakowin as much as it has on their kinship relations, such as Pte Oyate (the buffalo nation) and Mni Sose (the Missouri River). What happened at Standing Rock was the most recent iteration of an Indian War that never ends.”

The very first encounters between the Oceti Sakowin of the Northern Plains (whom white settlers dubbed “Sioux”) and the US state in 1803 ended in violence, with US soldiers taking Indigenous hostages. The US claimed the right to Oceti Sakowin territories as part of its “Louisiana Purchase” from France. By 1823, the US Supreme Court decided that Indigenous people did not own but merely occupied their lands: a legal fiction meant to justify the violent seizure of Indigenous territory.

During their resistance to the ensuing invasions the Oceti Sakowin made certain agreements with the US government in their treaties of 1851 and 1868. But despite this the US military never ceased its campaign to erase Indigenous people from their historic lands and confine survivors to small reservations.

Estes points out that “as defeating highly mobile Plains nations in conventional battles was near impossible,” the US military turned toward the eradication of the buffalo — so important to the Oceti Sakowin culture and livelihood — as a method of warfare.

“From 1865 to 1883, the frontier army sanctioned the mass slaughter of buffalo to shatter the will to resist by eliminating a primary food supply and a close relative … the ‘Indian problem’ was also a ‘buffalo problem,’ and both faced similar extermination processes, as much connected in death as they were in life. The destruction of one required the destruction of the other.”

After the US military had destroyed the buffalo the Oceti Sakowin could no longer survive on the plains. They were forced onto reservations where they found refuge along the bottomlands of the Missouri River basin.

By the 1940’s the Oceti Sakowin were under a new assault from a series of dams along the Missouri that would flood many of their reservations. Estes calls the dams built under the US government’s Pick-Sloan Plan “a twentieth-century Indigenous apocalypse.” Indigenous lands, and Indigenous people’s ability to provide for themselves, were sacrificed again to provide hydroelectricity, irrigation and flood defenses for white America.

“During this era, treaties were broken by statute rather than by brute force. In the Missouri River basin, the Pick-Sloan Plan destroyed more Indigenous lands than any other public works project in US history, affecting twenty-three different reservation communities.”

Other reservations were broken up by legislation and Indigenous people were forced to move to cities elsewhere.

A new generation of young people formed several radical pan-Indigenous organizations associated with the Red Power movement that emerged in the 1960s and 1970s. The American Indian Movement (AIM) was one of the most influential of these groups. Famous for its occupation of Alcatraz island in 1969 and for its armed occupation of Wounded Knee in 1973, “AIM’s militancy a generation earlier paved the way” for the historic reunification of the seven nations of the Oceti Sakowin at Standing Rock.

Estes insists that Indigenous people in the US never just fought against their oppressors. They have always had a positive political project that “fought for Indigenous life and just relations with human and nonhuman relatives, and with the earth.”

Our History is the Future is also more than an overview of Indigenous resistance. Calling for the “emancipation of the earth from capital,” it situates the Oceti Sakowin’s struggles as part of a wider international resistance to racism and imperialism.

“Racial capitalism was exported globally as imperialism, including to North America in the form of settler colonialism. As a result, the colonized and racialized poor are still burdened with the most harmful effects of capitalism and climate change, and this is why they are at the forefront of resistance. The legacy of racial capitalism and ongoing settler colonialism were why the Oceti Sakowin had gathered to oppose KXL in 2014, and why they would gather again to oppose DAPL.”

Simon Butler is co-author of Too Many People? Population, Immigration, and the Environmental Crisis (Haymarket Books, 2011)