“In the period after 1945 the world entered a new stage of planetary crisis in which human economic activities began to affect in entirely new ways the basic conditions of life on earth.”

Foster was not the first radical to anticipate the 21st century findings of Earth System science. As I show in Facing the Anthropocene, left-wing environmentalists Rachel Carson, Murray Bookchin and Barry Commoner argued in the 1960s that the growing environmental crisis had its roots in a new global environmental regime that began after World War II.

I now want to correct an omission and add two more names to the list of Anthropocene science precursors: Yrjö Haila and Richard Levins.

I have just reread their brilliant book, 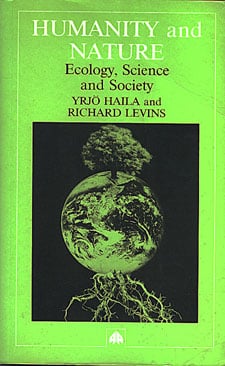 Ecology, Science and Society, published in 1992 by Pluto Press. It has been on my bookshelves for years, but somehow I missed it in my research, and unfortunately it is out of print.

At the time, Haila was a research fellow in Zoology at the Academy in Finland, and Levins — best-known as co-author of The Dialectical Biologist — was a professor of public health at Harvard Medical School. They described themselves as “committed to radical transformation of society in accordance with the interests of the oppressed” — in fact, both were Marxists.

In the passage below, they clearly anticipate such key Anthropocene concepts as the great acceleration, planetary boundaries, and global change that can undermine Earth’s life-support systems — and, like the Anthropocene Working Group, they identified the mid-20th century as the time of transition to a new stage in Earth’s history. They were pioneers in recognizing and defining the new epoch, and their book deserves to be much better known.

The ecological crisis is a new stage in global ecohistory

Global ecohistory has entered a new stage sometime after the Second World War. Ecological crisis is an apt name for this stage, characterized as it is by the dramatically increased human capacity to cause irreparable destruction in nature.

Paradoxically, however, it is difficult to give a precise definition to the ecological crisis. The crisis has two dimensions: the material basis is that human activities have reached the potential of modifying such geophysical processes that determine the basic boundary conditions of the very existence of human life on the earth.

This prospect has caused an explosion in the cultural consciousness about environmental hazards. But the paradox is that neither are the boundary conditions of human existence on the earth visible to us, nor are we able to distinguish between ‘allowable’ and ‘forbidden’ human activities. This is due to the very complexity of the interplay between society and nature. …

The ecological crux of the matter was recently crystallized by Eugene P. Odum (1989) in the words “our endangered life-support systems.” Deterioration of ecosystems all over the world threatens the life-supporting potential of nature. This threat is real — although we do not know how actual — even on the global scale.

The conditions making life possible on the earth were produced by life itself, and there are no transcendental guarantees that those conditions cannot change.