In Nigeria, oil extraction and production has devastating consequences for the people living in the Niger Delta, but those who flee are not protected by the Geneva Convention on Refugees.

In Nigeria, oil extraction and production has devastating consequences for the people living in the Niger Delta, but those who flee are not protected by the Geneva Convention on Refugees. 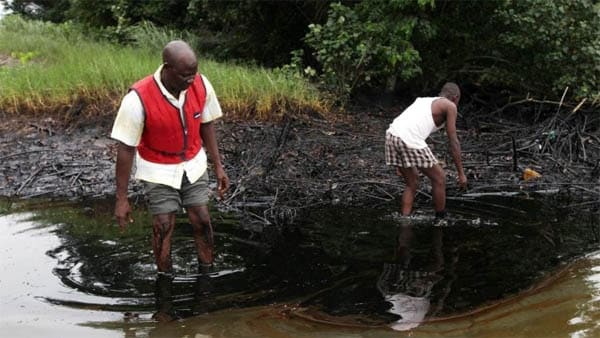 60 million people are on the run worldwide, the majority coming from countries in the Global South. According to the Office of the United Nations High Commissioner for Refugees (UNHCR), one third of the refugees originate from Africa.

Wars, armed conflicts, human rights violations, political instability, discrimination, poverty as well as the consequences of climate change and natural disasters are often named as causes for flight. But there is also ecocide – the destruction of livelihoods through the ruthless exploitation of raw materials and the subsidy politics of industrialized countries in the West. The ecosystems in many African regions are being systematically destroyed in order to maximize profits and to secure and expand the prosperity of the West.

The peaceful use by the people who live in these areas has almost become impossible. Life has become unbearable in most of the resource rich regions in Africa, so that many people leave their homes desperately. Critics like the British lawyer Polly Higgins have therefore requested the international community to acknowledge ecocide as the fifth ‘Crime against Peace’ for a long time. Others speak of ‘Crime against Humanity’.

Environmental destruction and the destruction of livelihoods in Africa are not new. What is new is that many experts regard the ecocide as the most important cause for flight and migration in light of its devastating consequences. However, those who flee are not protected by the Geneva Convention on Refugees. They are usually defamed as ‘economic refugees’ — while the consequences of criminal economic activities by western companies are being camouflaged.

Poverty in the oil-rich Niger Delta in Nigeria, for example, is a direct consequence of an ecocide. Oil extraction started in 1958, promised to the population to be the basis for future wealth. But the announced blessing turned into a curse: ‘Our oil, your prosperity, our death and extinction!’ — the slogan of the region is ever present. Indeed, today, the approximately 70.000 km² of Niger Delta are one of the most polluted regions in the world – the results are devastation, expropriation, poverty and social marginalisation.

Nigeria, with a population of approximately 170 million, is the most populated country in Africa and is disposing of the largest African oil reservoir. With 2,5 million barrels per day, the country is the biggest oil exporter in Africa and the sixth biggest of the world. The country’s economy is extremely dependent on the black gold which provides 90 per cent of its public revenue. Despite the wealth, nearly two-thirds of the population live in absolute poverty and a small corrupt elite plunders the state’s treasury — in line with the motto, ‘anyone who sits in the customs office without becoming rich is stupid’.

The Shell Petroleum Development Company, a joint venture between Royal Dutch Shell and the Nigerian State, is responsible for the oil extraction. The actual extracting activities are, however, conducted by several oil companies like Royal Dutch Shell (47 per cent), ExxonMobil (22 per cent), Chevron Texas (19 per cent) and ENI/Agip (5 per cent).

During the last 50 years, nearly 7,000 oil accidents occurred in the Niger Delta, and the several billion litres of spilled oil have transformed the former natural paradise into hell on earth. The area is Africa’s third largest water reservoir, but its soil as well as its water are extremely contaminated, with the soil being damaged up to five meters deep. Rusty and outdated pipelines run unprotected and above ground across villages. Tank reservoirs are responsible for half of the damages followed by acts of sabotage and oil extraction activities. Closed down drilling rigs and illegal diversion of oil are further causes of the oil pollution.

The ground water is heavily contaminated. In 2011, the World Health Organization (WHO) found an extremely high concentration of hydrocarbon, over 900 times higher than international standards allow and 1000 times higher than the limits defined by the Nigerian State itself. Every year, more than 400 million tons of carbon dioxide are set free into the atmosphere by burning gas. According to the WHO, the air pollution is extremely dangerous to health. It is one of the main causes for cancer in the world.

According to the United Nations (UN), it will take at least 30 years to remove the damages, which would cost around half a billion Euros. And yet, a further 13 million barrels of crude oil contaminate the Delta every year. The oil companies disregard all Nigerian environmental protection laws and get away with it almost with impunity. To pay a ridiculously small penalty fee is more profitable than following the law. Critics accuse the companies of racism and demand that they follow the same operative standards as in their respective country of origin in the West. The corrupt political elites do not act against the intrigues of the oil multinationals as they benefit massively from them.

At the end of the 1980s, the government took brutal actions against the peaceful protest against multinationals and the changing military regimes. The Ogoni people were leading the protests guided by the author and human rights activist Ken Saro-Wiwa. In order to suppress the emerging protests, Shell-Nigeria asked the military for help. It came about immediately, followed by a massacre, millions of imprisonments without charges as well as a mass exodus from the Delta. The leader of the protest, Saro-Wiwa, was arrested and put in solitary confinement. Together with 8 of his fellows he was sentenced to death on October 31 1995 and executed ten days later — despite international protests.

More than 20 years after the executions, there has been little improvement in the Niger Delta, despite the implementation of democracy. The devastation of the environment is continued unimpeded. It is already referred to as an unprecedented ecological disaster. Nigeria’s poorest of the poor live in the Delta region. Child mortality is at 20 per cent, and life expectancy is clearly under the country’s average. Soil, rivers and water are contaminated to such a high degree that agriculture and fishing, the former livelihood base of the people, are almost not possible any more. The consequences are disastrous: high unemployment rates and hopelessness especially among youth, mass exodus, extremely high crime rates, and forced prostitution. An end of the ecological horror is not in sight.

In April 2010, the worst oil spill in US history occurred in the Gulf of Mexico, resulting from an explosion on the oil platform Deep Water Horizon which is run by the oil multinational BP. It evoked protests and resentment all over the world. The owner BP was forced to clean the oil pollution as soon as possible and to pay 20 billion US $ for compensation, or rather as a penalty. In the Niger Delta, however, images like these have been the grim reality since the oil production started in 1958. In comparison to the oil spill in the Gulf of Mexico, the permanent and lasting ecological disaster in Niger Delta receives almost no media attention.

Nigeria, like many other African countries, is a classic example of an ecocide linked to flight and migration. The people from the Niger Delta who leave their homes towards big cities or foreign countries are often labelled ‘economic refugees’ in Europe. Can politics be more hypocritical than classifying people as ‘economic refugees’ without naming and prosecuting the ‘economic criminals’ who are responsible? The Geneva Convention on Refugees needs to be revised. The question we have to ask is: Who are the economic criminals that are destroying the livelihoods of people in Africa and force them to flee from their homes? The economy?! However, we are all the economy in the end.

Peter Donatus is a Nigerian freelance journalist, project and events manager and human rights activist. As environmental activist and long-time critic of Shell, the 49-year old has been fighting against the environmental degradation and the destruction of livelihoods by oil companies in the Niger Delta in Nigeria for more than three decades. After several months in solitary detention, he fled from Nigeria 26 years ago and lives in Germany since then. Translation: Mona Niemeyer.

This article was first published in German by AfricAvenir and Südlink. It was written as part of the project “Why we are here!? African perspectives on flight and migration” conducted by AfricAvenir in 2015/16.