In “Economics After Capitalism: A Guide to the Ruins & a Road to the Future,” ecosocialist Derek Wall offers an insightful overview of non-orthodox economics, from Social Credit to Marxism to Elinor Ostrom. 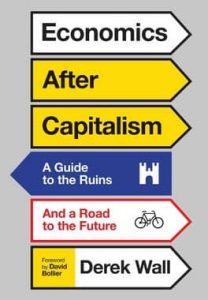 ECONOMICS AFTER CAPITALISM:
A Guide to the Ruins & a Road to the Future
By Derek Wall
Pluto Press, 2015

Derek Wall, ecosocialist activist and international coordinator of the Green Party of England and Wales, has written a primer on the main strands of economic critique of globalized capitalism.

It is a short and easily readable book, well suited to someone looking for a starting place. For those already embedded in one of these strands, it provides a welcome introduction to some of the others.

It is written in a pedagogical rather than polemical way, promoting understanding before judging — although Wall does not shy away from explaining his own views in the end. This is a great format.

“Globalization” has been so transparently unstable and unfair that it has generated its own internal critique from Keynesian “insiders” like billionaire investor George Soros and former World Bank chief economist Joseph Stiglitz.

Wall says that despite their genuine insights, and those of John Maynard Keynes whose views he also outlines, these figures are “vaccinating against anti-capitalism.” They want to save the system by repairing it. Whether this can succeed is another question.

Other critics of unregulated capitalism (but not necessarily of capitalism per se) that Wall looks at are anti-corporate power campaigners and “funny money” theorists, who were prominent in the 2011 Occupy Wall Street movement that spread around the world.

The “funny money” theories, centering on how fractional reserve banking creates money by issuing credit, have origins in the Social Credit movement founded by the anti-Semitic Major CH Douglas in the early 20th century. Despite this odd origin, there are some interesting insights.

Nevertheless, these ideas are criticized by Wall, in the end, for failing to understand the overall system. Instead, they focus on futile bids to reform only one of its facets — the banks and international finance.

A further trend Wall presents is the traditional Green economic theory, represented particularly in the “small is beautiful” school. This is reflected in policies such as creating local currencies and promoting small business.

This view has an important insight, namely “that economics is a system that tends to dominate and distort human values”. This leads to challenging the assumption that human wants are unlimited (unlike resources to meet them).

Wall says: “Greens would argue that instead, the economic system in its reliance on economic growth, makes us want more and more … through branding, advertising.”

Yet there are more systematic critiques of capitalism than traditional Green views, and some of these overcome its pro-market weaknesses. Marxism is a broad school, and Wall gives a summary of Marx’s own views, followed by later developments. He finishes with three outstanding contemporary Marxist thinkers: Fidel Castro, Hugo Chavez and British political economist David Harvey.

Wall sometimes describes Marx as ambivalent about whether he supported capitalist globalization or not: was it a force for material progress or a brutal imposition on the colonial world? This seems a labored device at times. Marx was not necessarily in two minds himself, so much as describing a contradictory process as it unfolded: where capitalism brought great suffering, it also brought a great development of economic forces, which may in turn lay the basis for more positive changes.

Wall leaves this apparent contradiction hanging, but partly answers it later in the book. Whether he does justice to Marx is a matter for further debate.

Moving on to the “autonomist” school that has risen to prominence in the last 20 years, Wall looks at an alternative to understanding capitalism according to objective economic laws. Autonomists, drawing on Marx, anarchism and postmodernism, see capitalism developing “subjectively” in response to the (often latent) rebellion of the working class.

At every turn, capitalism seeks to disorganize and disrupt the process of “recomposition” that may bring more coherence to anti-capitalist resistance among the working class.

Rounding off the survey, two currents, perhaps closest to Wall himself, are surveyed: ecosocialism and ecofeminism.

Whether it is greens seeking to import a socialist analysis, or Marxists seeking to incorporate the insights of ecology, ecosocialism is a diverse, but vibrant and new set of ideas. Here we meet the concept of “the commons” — communal property in various forms, with ecosocialism fighting to extend this valuable alternative to private property and the neoliberal market.

Whereas autonomism is defined as much by its diverse practice as its theorists, ecofeminism is a largely academic school. This might seem easier to survey, but the range of views within it are broad. These are by no means all anti-capitalist, but offer some radical perspectives on how labor and nature are understood.

Here we also meet Nobel Prize-winning economist Elinor Ostrom, whose life work looked at many examples of “commons” in practice through history. Ostrom uncovered how they succeed (where neoliberal theory says they cannot), but also where and how they fail.

Ostrom was not a radical anti-capitalist, but if commons are to be a foundation stone of new economics (as Wall suggests), then Ostrom is surely an important contributor.

In the conclusion, Wall cites Ostrom and Marx as two key thinkers that need to inform efforts to create a post-capitalist economics. Marx, for keeping the global and revolutionary aspects of communal, anticapitalist economics in perspective, and Ostrom for invaluable insight at the micro scale.

Wall’s message, in summing up, is to defend and extend the commons beyond capitalism. We cannot settle for reforms to the system, as some like the Keynesians Soros and Stiglitz would have us do. We must also be wary of commons efforts being co-opted by the system.

Yet we also cannot wait until after the revolution: “To say no change is possible until everything changes … is the ideology of the dogmatist.”

In such a wide-ranging survey of extremely diverse schools of thought, it is inevitable that not everyone will be satisfied. I have indicated some dissatisfaction with the treatment of Marxism. On the other hand, the outlines of many other schools of thought, perhaps equally unsatisfactory to their own adherents, were often illuminating and gave me new sympathy for their views and efforts.

In looking for inspiration for post-capitalist economics, some contemporary examples are treated, but too briefly: the real revolutionary experiences of Venezuela and Bolivia, in Latin America, and the revolutionary experiment in Rojava in Syria’s north.

Rojava, although very new, has started off like most 20th century revolutions — radicals seizing an opportunity amid the collapse of a capitalist state due to war or civil war. Yet the philosophy of Rojava’s leaders is quite new, owing as much perhaps to anarchist and ecosocialist thought as to Marxism. Wall touches on it; perhaps the history being written there is too unfinished to write more.

Venezuela and Bolivia, on the other hand, have come to power through elections, a path that repeatedly ended with blood or betrayal in the 20th century — and still may, as the experience of the 2009 coup against Manuel Zelaya in Honduras and Syriza’s capitulation to austerity in Greece attest.

If there is a criticism of the book’s content, it is that it perhaps pays too little attention to these kinds of real, living examples that have progressed so much since the first edition of the book appeared in 2005.

The more formulaic injunction to defend and extend the commons is important, but it requires more elaboration in practice. Perhaps that practice is yet to come.