Cuban scholar Olga Fernández Ríos at the launch of the Cuban edition of Michael Lebowitz’ book. “Its publication contributes positively to the defense of the socialist ideal and to the necessary contemporary debate around the construction of the new society.” 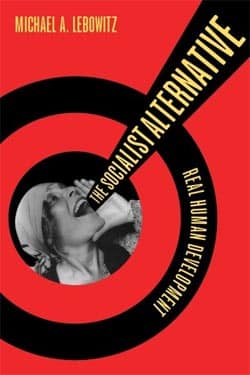 The following was a presentation given by Cuban scholar Olga Fernández Ríos at the launch of the Cuban edition of Michael Lebowitz’ book The Socialist Alternative: Real Human Development at the Havana International Book Fair, February 15, 2015. It has been translated by Sean Seymour-Jones.

Lebowitz will be one of the keynote speakers at Socialism for the 21st century: Moving beyond capitalism, learning from global struggles being held in Sydney, Australia, May 13-15.

Its author is a professor emeritus of economy from the Simon Fraser University of Canada. For us Cubans his work is very familiar and today we can recall many of his works: Beyond Capital: The Political Economy of the Working Class that received the Deutscher Prize in 2004 for the best and most innovative recent work of the Marxist tradition in the English-speaking world. This text was published in Cuba in 2008 by Editorial Ciencias Sociales. Likewise, in 2009 Editorial Ciencias Sociales published Socialism Doesn’t Fall From the Sky and in 2015 Ruth Casa Editorial and the Instituto Juan Marinello published The Contradictions of “Real Socialism”: The Conductor and the Conducted. More recently Lebowitz published The Socialist Imperative.

On this occasion, we dealing a study that covers a very topical subject of interest to our country and for the Latin American context: the pertinence and existing possibilities for the development of socialism with a correct understanding of the process of socialist transition.

In this book Lebowitz continues the work that he has been doing for years in his criticism of capitalism and the human alienation that accompanies it, together with the contribution of interesting reflections about the unsuccessful experiences of so-called real socialism and the factors that led to its collapse.

From these starting points, on this opportunity he develops a thesis about the socialist alternative in contemporary conditions, and does so with an argued defense of socialism as the necessary, valid and possible way out from contradictory and predatory capitalism. This is combined with a Marxist perspective present throughout the book that breaks with stereotypes and dogmas around socialism and with schemas that distort the conceptions of original Marxism and the contributions of Lenin and other revolutionary thinkers.

The analysis of socialist transition, viewed as an integral and contradictory process, reaches in this book a theoretical level of great interest to Cuban social scientists. It deals with a subject that in my judgement deserves greater attention in contemporary reflections and debates about socialism, inside and outside of Cuba, as does the analysis of the state and institutionality in this process, to which he grants special relevance in this book.

The other merit of this timely text is that it helps to understand the complexity of socialist transition and the validity of looking for answers that avoid the errors that brought about the collapse of socialism in the USSR and Eastern Europe.

Michael understands the necessity and pertinence of this pursuit and makes his contributions in that regard.

The subjects and thesis that he sets out and his conceptions are polemic, as is the case with the relations and contradictions between individual interest and social interest in socialism, which in my judgement adds to the case for the publication of this book.

In this way he backs a process of socialist transition in which people achieve human development, including the development of individuality through the role that workers play, and meet social necessities within the framework of the community that is prioritised in its analysis, together with other factors.

Furthermore, he takes up issues that were absent in the analysis of the socialist experiences of the twentieth century. For example:

The book is written in clear and direct language… its publication contributes positively to the defense of the socialist ideal and to the necessary contemporary debate around the construction of the new society.

In our country that debate is being carried out on the basis of the conviction that the process of rectification that the VI Congress of the Cuban Communist Party opened up should lead to a perfecting of the socialist transition and greater clarity about the concepts around which such a complex process is sustained.

It is logical that the thesis displayed in this book will provoke new reflections for or against it. But above all it will contribute to the advance of the necessary conceptualisation around socialism to which we aspire and about the process for its achievement. I think that there are many reasons to go back to Lebowitz’ reflections in a moment in which it is necessary to deepen that conceptualisation.

In summary it is a book of great value and usefulness for the Cuban and Latin American present.