Book review: Far from being a ‘tragedy’ the commons offers genuine solutions to climate change and other environmental problems 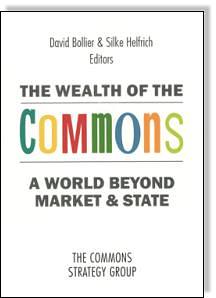 In 2009 Elinor Ostrom became the first woman to win a Nobel Prize in economics. This was for her work on the concept of commons, collectively owned property from Swiss Alpine pastures to indigenous rainforests to free software.

Her work on the commons was inspired by her reaction to a lecture by Garrett Hardin, who coined the phrase “tragedy of the commons.” He argued that shared property would always be overused and abused, but his real target was overpopulation. Although he had carried out no actual research, he insisted that in the absence of authoritarian control, a “commons in breeding” would destroy the environment. “Freedom in a commons brings ruin to all.”

For her doctorate, Ostrom had studied how communities organized to sustain water in Los Angeles West Basin, by rationing water use, to stop salt water from being sucked in the sea. listening to Hardin she realized that she had studied something he claimed was impossible, a successful commons.

“That gave me insights into people, some of whom had spent 20, 30 years trying to solve this tough problem. There had not been one thing they did. They did a number of different things, including building a barrier against the ocean coming by putting water down through wells—very ingenious. I didn’t know I was studying the commons.

“[Hardin argued that such cooperation was impossible but] he really was worried about population. He indicated that every man and every woman should be sterilized after they have one child. He was very serious about it….

“I was somewhat taken aback. ‘My theory proves that we should do this,’ and people said, ‘Well, don’t you think that that’s a little severe?’ ‘No! That’s what we should do, or we’re sunk.’

“Well, he, in my mind, became a totalitarian. I, thus, had seen a real instance where his theory didn’t work.”

Ostrom tracked case studies of both successful and failed commons to learn how self-governing ecologically sustainable systems could be built. While she came from a liberal background, she showed that economics extends beyond the market. To put it simply, she examined the nuts and bolts of non-monetary economics.

Today, the battle to preserve, extend and deepen the commons is becoming more and more popular, and The Wealth of the Commons, an anthology of over seventy essays, is an excellent introduction to the topic. Where Garrett Hardin saw the commons as “tragic,” this book shows how it can be a solution to climate change and other environmental problems.

Its impossible to list all the excellent contributions but it is global in scope and a very accessible read. The Marxist tradition is well summed up in a particularly good essay by the historian Peter Linebaugh. Ryan Conway from the Ostrom workshop provides a clear introduction to Elinor Ostrom’s work, which I particularly recommend.

Commons can work. An alternative to neo-liberalism is possible. However, what the anthology illustrates is that commons are founded on property rights and property rights are about power. Democratic ownership of the means of production is necessary, so that society can be managed for the good of all and not just an elite.

Ostrom’s work suggests that democratic control is more likely to lead to sustainability than centralized control because collective management allows people to construct rules for protecting the environment that work based on local knowledge.

Marx’s long term project can be seen as seeking to understand how commons – which were often enclosed and destroyed – can be the basis for a communist society which is ecological and democratic. His emphasis was on why revolution is necessary to take control from a tiny wealthy class and restore it to society at large.

Commons are about both the macro factors of power, class struggle and transformation, and the micro politics and economics that can make shared control work on the ground. David Bollier and Silke Helfrich have produced a collection which will inspire further action to create a democratic and ecological alternative.

Derek Wall is International Coordinator of the Green Party of England and Wales. He is currently a writing a book on “The Sustainable Economics of Elinor Ostrom.”

“The Wealth of the Commons,” a collection of 73 essays that describe the potential of the commons, is available in hard copy or electronic form through the book’s website. It is also available in German, as “Commons –Für eine neue Politik jenseits von Markt und Staat,” published by transcript verlag.