“Marxist class analysis can help answer many of the questions raised by ecological economists, at the same time that the substantive agenda of ecological economics can enrich the materialist dimension of Marxism” 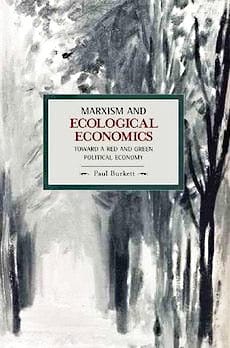 Paul Burkett, along with John Bellamy Foster has been at the forefront of both rescuing the ecological core of Karl Marx’s work and developing it further. This book puts the case that Marxism offers both the best critique of existing ecological economics and the best alternative. Burkett argues that “Marxist class analysis can help answer many of the questions raised by ecological economists, at the same time that the substantive agenda of ecological economics can enrich the materialist dimension of Marxism.”

Until recently, Burkett argues, ecosocialist (a term I consider slightly problematic in this context) economists have “crowded out any serious Marxist engagement with ecological economics” because of the domination of the “two contradictions’ framework.”  Behind this lies a critique of Marxism that it doesn’t “adequately account for the natural and social conditions of production.” Burkett’s book is an attempt to seriously grapple with these and other critiques and prove them wrong.

The first part of the book is an excellent attack on the ideas of contingent valuation (CV). Essentially, this boils down to various attempts to quantify natures’ contribution to economics by putting a price on different parts of the environment. In some of the cases examined here, this is partly an attempt by various economic theorists to explore ways that the economy can take better account of the natural world. In others, CV is an attempt to mathematically model the resource inputs and waste outputs of the economic process.

Should any reader think this is purely an academic experiment, I direct them to those neo-liberal politicians who, at the 2011 UN Environment Conference in Rio de Janiero, attempted to push an agenda where such price tags became the mainstay of international ecological practice. Something I discussed briefly in this article (PDF).

The great strength of Burkett’s book is that the way he uses Marx’s ideas. In contrast to the academic jargon of the mainstream economists he is analysing, Marx’s alternatives shine through with great clarity. Burkett begins by looking at how Marx’s debates with the physiocrats (19th century economists who believed land was the source of all wealth) allowed him to develop on their ideas. Burkett writes that “Physiocracy represents an interesting hybrid of the different views held by present-day ecological economists on nature’s value.” He continues:

“What distinguishes Marx from both the physiocrats and the contemporary nature valuation debate is his definition of ‘value’ as capitalism’s specific form of economic valuation. For Marx, real wealth or use-value is anything that satisfies human needs, whereas value is the specific social representation of use-value under capitalism… Marx thus insists that value relations, including the various tensions between use-value and exchange-value, be analysed in terms of capitalism’s specific relations of production.”

Here is the crux of Burkett’s argument. However brilliant your economic model is mathematically, it cannot account for the destruction of the environment by capitalism, unless it examines the “relations of production.” Because Marx begins with the human-nature interaction at the heart of production, but then analyses all aspects of the social relations that result, his method allows a much more nuanced understanding of the degradation of nature. Affixing prices to nature, or parts of the natural world, cannot solve ecological problems because it leaves untouched the need for capitalism to accumulate for the sake of accumulation, whatever the consequences.

Neo-liberal approaches to the environment that begin by giving nature a price, end up with the “introduction of market mechanisms and norms into new spheres of life that previously have been protected from markets.” [John O’Neill 1997, quoted by Burkett] The solution then, for the likes of Sir Nicolas Stern, is the introduction of even more market mechanisms, and the commodification of further aspects of nature. Once again, against this approach, Marx’s approach begins from the nature of production, not the existence of markets.

“The conditions required by human production and development are in no way, not even partially, external  to the market-orientated sphere where surplus value is produced and realised. They are part of an overall process in which use-value (human need satisfaction and development through the metabolic interaction of labour and nature) is subsumed under, and becomes a means of, the class-exploitative and competitive process of value accumulation. In Marx’s dialectical view, the ecological and other social costs of capital accumulation are internal to the general metabolic process of human-natural reproduction (co-evolution) in its specifically capitalist form.”

The problem is not that capitalist markets haven’t gone far enough, but the nature of capitalist production itself.

I’ve concentrated on these early aspects of Burkett’s book here, because I think they are most pertinent to the debates socialists and environmentalists are having at the moment. Burkett’s book deals in-depth with a number of other related topics. Some of these are very challenging and I feel that readers who, like myself, lack a background in mainstream economics may struggle with some of the chapters. While I was fascinated by those economists who have tried to use an analysis of entropy in ecological economics, I found that even Burkett’s clear explanations were not enough. That said, there is still much for the reader to get from these chapters, if he or she is willing to study them.

Later chapters too, will be more accessible if the reader is conversant with the works of various other economists, and I think that many readers who pick up this book hoping for enlightenment may stop before the end. This would be a shame, because in his final chapters Burkett once again takes up the argument that Marxism can offer both a critique of existing ecological economics and an alternative.

Unlike many academic Marxists Burkett doesn’t simply suggest that Marxism’s strength is just its analysis of capitalism, he also argues that the centrality of class struggle is of primary importance. In particular Burkett looks forward to a revolutionary over-throw of capitalism. His final chapters demonstrate the way that, in Marx’s words,

“Socialized men, the associated producers, govern the human metabolism with nature in a rational way, bringing it under their collective control instead of being dominated by it as a blind power; accomplishing it with the least expenditure of energy and in conditions most worthy and appropriate for their human nature.”