A temperature increase of less than one degree has already disrupted the global climate system, and this is only the beginning. Will the Anthropocene bring a totally new climate regime? 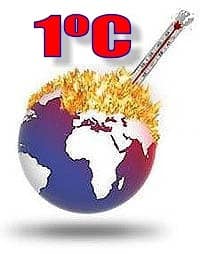 PART ONE: HOW BAD CAN ONE DEGREE BE?

Climate negotiators have adopted 2°C as the maximum increase that can be permitted if dangerous consequences are to be avoided. Many scientists, and the governments of many small countries, argue that 2° is too high – that the limit should be 1.5°. But according to climate experts, if current trends continue, the average temperature by the end of this century will definitely be 3.5° degrees above pre-industrial levels, and there is a strong possibility that the increase will be more than 4 degrees.[1]

That doesn’t sound like much. When I woke on a recent August morning, the temperature outside was 19°, and by noon, it was 25°. That’s a six degree jump in five hours or so, a pretty common experience in summer in the part of the Northern Hemisphere where I live. So why would we worry about an increase of 2 or even 4 degrees by 2100? Mention that at a party in my neighborhood, and someone is sure to say that they’d be very happy if our Canadian winters were 4 degrees warmer!

It may be counter-intuitive, but 4 degrees is actually a big jump. During the last ice age, when kilometers of ice covered areas as far south as present-day Chicago, the average global temperature was only 5 degrees cooler than today.

It’s important to remember that average global temperatures conceal substantial variations in time and place. For example, the atmosphere is consistently cooler over oceans, but a 4 degree average global increase could mean a 6 degree or more increase on land and a 16 degree increase in the Arctic. In the tropics, the increase would likely be less than 4 degrees, but that smaller shift would go from very hot to extremely hot.

There is more to global warming than average thermometer readings: temperature change can cause dramatic shifts in weather patterns, biodiversity, and much more. Unless radical changes are made, the Anthropocene will be marked not just by warmth, but by a new climate regime, very different from the 11,700 years of Holocene stability. That isn’t just speculation: the transition is well under way.

To begin, a necessary digression:

In September 2012, the prestigious journal Proceedings of the National Academy of Sciences published a study that examined how global warming to date has affected global climate. The results were remarkable: authors James Hansen, Makiko Sato and Reto Ruedy showed that the frequency of extreme temperatures, particularly in the summer, has “changed dramatically in the past three decades.”[2]

As a baseline, Hansen, Sato and Ruedy examined the period 1951-1980, before rapid global warming began and while the climate was still within the long-term Holocene range. They graphed average monthly temperatures for small (250km x 250km) areas covering the entire globe, and calculated the Standard Deviation for each measurement, to show how much year-to-year variation there was. As expected, the temperatures didn’t vary very much — almost every temperature point was within two Standard Deviations of the mean – Sigma-1 or Sigma-2. They then did the same for 1981-2010, and compared the results.

“The distribution of seasonal mean temperature anomalies has shifted toward higher temperatures and the range of anomalies has increased. An important change is the emergence of a category of summertime extremely hot outliers, more than three standard deviations (3σ) warmer than the climatology of the 1951–1980 base period. This hot extreme, which covered much less than 1% of Earth’s surface during the base period, now typically covers about 10% of the land area.”[3]

In practice, this means that extreme heat waves – Sigma-3 events, which were virtually non-existent in 1951-1980 – have become increasingly frequent. For example:

Referring specifically to those events, Hansen, Sato and Ruedy write “We can say with high confidence that such extreme anomalies would not have occurred in the absence of global warming.”[4]

They compare the climate to colored dice. In the baseline decades, two sides were red for hot, two were blue for cold, and two were white for near-average – the odds of any month being red, blue or white were equal. Now, the dice have been rigged: four sides are red, so hot comes up more often. But the analogy is breaking down, because we have to add a new category – extremely hot.

In a commentary, climatologists Thomas Karl and Richard Katz describe this paper as a “simple and elegant” demonstration that “we are now more than 10-fold as likely to endure an extremely hot summer than we were in the decades 1951-1980.”

“Hansen et al. have made the case that we are no longer waiting for evidence of global warming. It is clearly here now, affecting a wide variety of weather and climate events, and it will continue to grow as we burn more fossil fuels. …even the apparently normal distribution of temperature can display non-normal behavior, and this can lead to extremes of even greater magnitude than might otherwise be expected.” [5]

In short, an average temperature increase of less than 1 degree has already disrupted the global climate system, pushing the Earth’s climate out of Holocene conditions – and this is only the beginning. As Hansen, Sato and Ruedy warn, even 1 degree more could have devastating consequences: “In that case, the further shifting of the anomaly distribution will make Sigma-3 anomalies the norm and Sigma-5 anomalies will be common.”[6]