If greenhouse gas emissions aren’t stopped soon, unprecedented and deadly heat waves will become the new normal in most of the world. 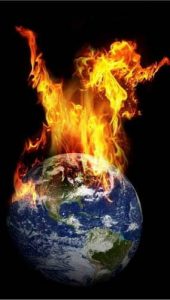 Part one of this article discussed James Hansen’s demonstration that a relatively small increase in global average temperature – under 1°C – has already produced a significant increase in the frequency and intensity of extremely hot weather. Heat waves that were very rare in 1951-1980 became ten times more likely in 1981-2010. As one of Hansen’s associates pointed out, this was not speculation about a possible future, but actual experience: “this is not based on models or predictions, just on a straightforward statistical analysis of measured temperature data.”[1]

Other studies, using other methods, have come to the same conclusion.

A 2012 paper examined the “exceptionally large number of record-breaking and destructive heatwaves” in the first decade of this century. The authors found that, “many lines of evidence – statistical analysis of observed data, climate modelling and physical reasoning – strongly indicate that some types of extreme event, most notably heatwaves and precipitation extremes, will greatly increase in a warming climate and have already done so…. The evidence is strong that anthropogenic, unprecedented heat and rainfall extremes are here – and are causing intense human suffering.”[2]

A study of extreme weather events between 1997 and 2012 concluded that “the available evidence suggests that the most ‘extreme’ extremes show the greatest change. This is particularly relevant for climate change impacts, as changes in the warmest temperature extremes over land are of the most relevance to human health, agriculture, ecosystems and infrastructure.”[3]

Others have found that global warming made the 2012-2014 California drought significantly worse than it would have otherwise been, and that in Australia, where hot and cold records used to be set in about equal numbers, all-time hot weather records now outnumber cold records by 12 to 1.[4]

In short, the climate isn’t just getting warmer on average, the climate pattern is skewing towards heat extremes. That’s critically important, because adapting to the new normal – if that’s even possible – will require responding to extremes, not just averages. For human well-being and survival, the issue is not just how much the average ocean level rises, but how high the biggest storm surges are; not just what the average daily rainfall is, but how severe the droughts are; not just how much warmer it gets on average, but how long and deadly the heat waves become.

If one degree of global warming has made extreme weather significantly more probable, what can we expect in coming decades, as the first full century of the Anthropocene unfolds? A growing body of scientific research has focused on that question, and the answers are consistent: the extreme heat events of recent years will become more frequent and more severe as the century progresses.

In 2012, for example, a special IPCC report on the nature and likelihood of extreme events concluded that, “it is virtually certain that increases in the frequency and magnitude of warm daily temperature extremes and decreases in cold extremes will occur through the 21st century at the global scale,” and very likely that the length, frequency, and/or intensity of warm spells or heat waves will increase over most land areas. Under business as usual scenarios, “a 1-in-20 year hottest day is likely to become a 1-in-2 year event by the end of the 21st century in most regions.”[5]

In the 2009 Copenhagen Accord, the governments of the world’s richest countries promised to “hold the increase in global temperature below 2 degrees Celsius, and take action to meet this objective consistent with science and on the basis of equity.”[6] The Accord as a whole has been justly criticized as a cynical backroom fraud designed to avoid taking action, and the 2 degree target has been called a death sentence for billions of people in Africa, Asia and Latin America. As British climatologists Kevin Anderson and Alice Bows write, 2 degrees “represents a threshold, not between acceptable and dangerous climate change, but between dangerous and ‘extremely dangerous’ climate change.”[7]

Nevertheless the 2° pledge gives us a benchmark: if action on climate change depends on the voluntary actions of those governments, that’s the most we can expect. The reality is likely to be somewhere between that and business as usual – i.e., doing little or nothing to cut greenhouse gas emissions, a policy which will likely raise the global average temperature by 4° over the pre-industrial level, before 2100.

The World Bank, which has invested billions of dollars in fossil fuel developments, is no altruistic friend of the environment. But it also invests in climate change adaptation and other climate-related projects, so perhaps it had those opportunities in mind when it commissioned the prestigious Potsdam Institute for Climate Impact Research (abbreviated PIK, from its German initials) to study and report on the impact of the business as usual option and the possibility of a 4° temperature increase – how much difference could two additional degrees make?

Whatever the Bank’s motives, it could not have expected the outcome. PIK itself has been a leader in climate research since 1992, and yet the Institute’s Director, Hans Schellnhuber, told the UN climate conference in Doha in 2013 that, “even we, the researchers, were shocked by our findings.”[8] 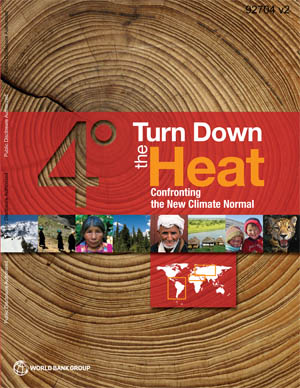 Those findings were published by the World Bank in three substantial reports, in 2012, 2013, and 2014, under the overall title Turn Down the Heat.[9] They combined an extensive review of research by scientists around the world, with state of the art computer modelling based on the IPCC’s new emission scenarios, called Representative Concentration Pathways.[10] They focused on two of these: RCP2.6, under which immediate and steep emissions cuts may keep temperature increases below 2°C, and RCP8.5, which is essentially a business as usual projection under which emissions and temperatures continue growing, which PIK projects will lead to global warming of about 4°C above pre-industrial levels by the 2080s.[11]

The scientists used the labels 2°C World and 4°C World for the options of rapid emission reductions and business as usual, and compared them to the baseline period that James Hansen and his associates used, 1951-1980. The results strongly confirm Hansen’s finding that an increase in average temperature leads to a disproportionate increase in heat extremes – going from 2° to 4° more than doubles the extent and magnitude of the damage.

In a 2°C world, unusual (Sigma-3) heat waves will affect about 20% of the world by about 2050 and continue through the century. (The PIK report does not discuss whether this scenario is realistic, but it should be noted that it requires emission cuts much more drastic than any First World government has even suggested.)

In a 4°C World, about 50 percent of the world’s population, particularly in Africa, Central America and parts of South America, will frequently experience unusual (Sigma-3) heat waves by 2040 – that will be the new summer norm. By 2100, unprecedented (Sigma-5) heat waves will affect 60 percent of the world’s land area, particularly the poorest countries where people have the fewest resources for protection, and no way to escape.

This passage from the first Turn Down the Heat report is a powerful summary of heat extremes in a 4° World.

“The effects of 4°C warming will not be evenly distributed around the world, nor would the consequences be simply an extension of those felt at 2°C warming. The largest warming will occur over land and range from 4°C to 10°C. Increases of 6°C or more in average monthly summer temperatures would be expected in large regions of the world, including the Mediterranean, North Africa, the Middle East, and the contiguous United States.

“Projections for a 4°C world show a dramatic increase in the intensity and frequency of high-temperature extremes. Recent extreme heat waves such as in Russia in 2010 are likely to become the new normal summer in a 4°C world. Tropical South America, central Africa, and all tropical islands in the Pacific are likely to regularly experience heat waves of unprecedented magnitude and duration.

“In this new high-temperature climate regime, the coolest months are likely to be substantially warmer than the warmest months at the end of the 20th century. In regions such as the Mediterranean, North Africa, the Middle East, and the Tibetan plateau, almost all summer months are likely to be warmer than the most extreme heat waves presently experienced. For example, the warmest July in the Mediterranean region could be 9°C warmer than today’s warmest July.

“Extreme heat waves in recent years have had severe impacts, causing heat-related deaths, forest fires, and harvest losses. The impacts of the extreme heat waves projected for a 4°C world have not been evaluated, but they could be expected to vastly exceed the consequences experienced to date and potentially exceed the adaptive capacities of many societies and natural systems.”[12]

Bear in mind that the projected 4° increase by 2100 is a mean, not a maximum. The PIK researchers report that the only models based on RCP8.5 that include possible warming under 4° do so by making extreme assumptions about improved energy efficiency and reduced energy demand.[13] Indeed, according to the latest report from the usually cautious Intergovernmental Panel on Climate Change, if emissions growth continues there is a chance that global average temperature could rise as much as 7.8° by 2100, a possibility that would make a 4°C World seem entirely benign.[14]

A 4°C World would not be just warmer: it would be a decisive break with Holocene conditions, a new climate regime.

[6] “Report of the Conference of the Parties on its fifteenth session, held in Copenhagen from 7 to 19 December 2009.”

[7] Kevin Anderson and Alice Bows. “Beyond ‘dangerous’ climate change: emission scenarios for a new world.” Philosophical Transactions of the Royal Society A, 369, 2011. 20-44

[10] Representative Concentration Pathways were introduced in 2012 to replace the older emission scenarios that the IPCC had used since 2000. The RCPs are essentially massive databases of climate-related data for the entire world, sub-divided into more than 500,000 geographic ‘cells’. This permits highly detailed studies of global change from the late 1900s to about 2100. For a non-technical overview, see Graham Wayne, “The Beginner’s Guide to Representative Concentration Pathways.” Skeptical Science, August 2013.