Under the latest greenhouse gas emission targets, it will be impossible to keep warming under 2°. The worst offenders include Australia, Canada, Japan, and Russia. 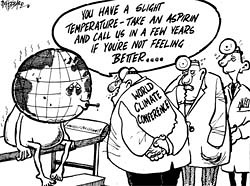 The climate targets so far submitted to the UN by governments collectively lead to global emissions far above the levels needed to hold warming to below 2°C, according to analysis by Climate Action Tracker (CAT),  a consortium of four research organisations.

If all countries that fall short of the CAT “sufficient” rating were to raise their ambition to meet the criteria for a “sufficient” rating this would close the emissions gap in 2025. If the current 2030 INDCs are locked in, holding warming below 2°C would become almost infeasible, as CO2 emission reduction rates would need to exceed 5% a year after 2030, and would make holding warming below 1.5°C almost impossible.

“It is clear that if the Paris meeting locks in present climate commitments for 2030, holding warming below 2°C could essentially become infeasible, and 1.5°C  beyond reach. Given the present level of pledged climate action, commitments  should only be made until 2025,” said Bill Hare of Climate Analytics.  “The INDCs therefore need to be considerably strengthened for the period 2020-2025.”

“One would have expected all the new Government climate targets combined to put the world on a lower emissions pathway, but they haven’t. One contributing factor is the fact that Russia, Canada, and New Zealand’s INDCs are inconsistent with their stated long term (2050) goals,” said Louise Jeffery of the Potsdam Institute for Climate Impact Research.

The CAT also found that, in most cases, the policies governments have in place now would not reduce emissions enough to match their INDCs for 2025. The exceptions are China and the EU, who would have to implement minimal extra policies to meet their targets, and could exceed them.

“With current policies being insufficient to limit emissions even to the INDC levels by 2025, it is clear that ramping up greater policy action needs to be encouraged as part of the Paris Agreement,” said Professor Kornelis Blok of Ecofys.

“Most governments that have already submitted an INDC need to review their targets in light of the global goal and, in most cases, will need to strengthen them.  Those still working on their targets need to ensure they aim as high as possible,” said Niklas Höhne of NewClimate Institute.

The next ten highest emitters yet to submit INDCs are India, Brazil, Iran, Indonesia, Saudi Arabia, South Africa, Thailand, Turkey, Ukraine, and Pakistan, together accounting for 18% of remaining global emissions not yet covered by INDCs (excluding LULUCF).