Fred Magdoff reviews Labor and the Locavore. Can the ‘buy local food’ movement support both sustainable farming and justice for farmworkers? 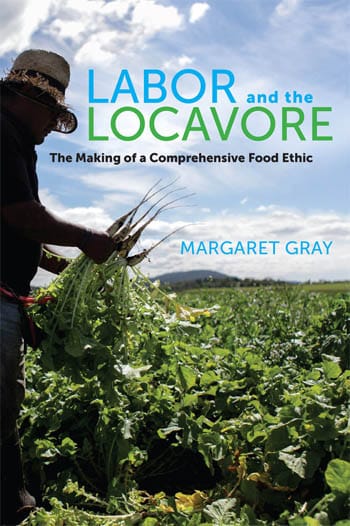 LABOR AND THE LOCAVORE
The Making of a Comprehensive Food Ethic
by Margaret Gray
University of California Press, 2014

Fred Magdoff is professor emeritus of plant and soil science at the University of Vermont and a long-time commentator on political-economic topics. He is coauthor, with John Bellamy Foster, of The Great Financial Crisis and What Every Environmentalist Needs to Know About Capitalism, both published by Monthly Review Press.

Over the past few decades there has been a rapid growth of interest in buying food that doesn’t come from large-scale industrial farms, with their use of copious amounts of commercial fertilizers, pesticides, and GMOs, and its inhumane treatment of farm animals.

The interest in alternatives to industrial agriculture is indicated by the incredible growth of purchases of organic food, the large increase in numbers of farmers markets around the country, Community Supported Agriculture (CSA) farms, direct sale from local farms to restaurants and, more recently, to schools.

This phenomenon, along with interest in where food we eat comes from and how it is grown— really the entire food system— is indicated by the proliferation of books and articles that have poured forth. Just a few examples:

A few books, such as Alison Hope Alkon’s Cultivating Food Justice: Race, Class, and Sustainability bring attention to the lack of social justice in the food system. This ranges from outright mistreatment of farm and other agribusiness labor to the unavailability of nutritious food to the poor because of price or living in what has been called a “food desert”—when people live in a community that lacks nearby stores that carry fresh fruits and vegetables as well as other healthy alternatives to junk food.

An important contribution to the discussion of alternatives to the conventional food system is Margaret Gray’s Labor and the Locavore, with its specific focus on the condition of laborers that work on the medium and small farms in the Hudson Valley of New York State, mainly raising fruits and vegetables, not far north of New York City. Buying local, usually from small to medium size farms, has been encouraged as a way to ensure that the food is fresh and, because of easy contact with the farmers growing the food, and it is easy to find out whether the farm practices used are consistent with one’s desires.

Another driving force for the buy local foods movement is also the disenchantment with the capture of much of organic agriculture by large-scale agribusiness. Organic production of food has been transformed from a more or less fringe hippie lifestyle into an important corporate profit center.  By 2008, 71% of the value of organic products sold in the United States came from largest 11% of farms, with each selling over half a million dollars of products per year. The concentration of organic production on large farms is almost certainly even more lopsided today than when the survey was carried out. How this happened is an interesting story, but beyond the scope of this review.

Thus supporting your local (or regional) small to medium size farm—hopefully practicing organic (whether certified or not) or “sustainable” farming—has become the mantra of the locavore movement. One of the reasons this path is possible, is that it is very difficult for very large farms to promote their products as local because they tend to be concentrated in certain parts of the country. The “buy local” food movement has been especially successful in New England, Wisconsin, Montana, and Oregon, with a significant number of states, including New York, somewhere in the middle, and a large group of states in the South, Midwest, West (Nevada and Utah) on the low end of locavore activity.

Gray points out that the interest in farming practices used to grow crops and raise animals — with most people especially concerned with use of commercial synthetic pesticides and the treatment of farm animals—omits a very important part of the story: the condition of hired workers on these local farms.

People mostly assume that, while labor on large farms might not be treated well, the farm family itself carries out most of the work on small or medium size farms. However, the reality is that although a very few small farms don’t rely on outside labor, most of these farms do need to hire workers—especially for harvesting produce, but also for many other tasks such as planting, irrigating, and weeding.

Based on extensive knowledge and background Gray, has interviewed both farm workers and farmers. She describes the changes in the composition of the farm labor force in New York over the last decades—from mainly migrant African American and Caribbean workers (with some local white workers, primarily youth) for a good part of the 20th Century to now being almost completely undocumented workers from Central America and Mexico.

These mostly seasonal workers generally live in substandard housing supplied by the farm and have a very isolated existence—afraid, with good reason, to travel off the farm and to congregate with workers from other farms. Because of their legal status and lack of strong command of English, these undocumented workers comprise a very docile workforce, not able to demand higher wages or better conditions that a citizen might feel free to make.

The contemporary Hispanic migrant labor force sees working on farms—as difficult as much of the labor is—as an opportunity to earn significantly higher income than in their home countries. Remittances account for a significant portion of their income— about half of their wages, for those Gray surveyed. And these funds allow workers to support families back home in important ways. On the other hand, they earn what are considered in the U.S. to be poverty wages.

And, going back to the 1930s, farm labor has been specifically omitted from important national and state laws and regulations that protect labor—they are not legally entitled to overtime pay or days off with pay and have no legal protection when trying to form a union. And farms with few workers—typical of small farms—are exempt from certain requirements in New York State. For example, if there are fewer than 5 hired workers, there is no need to have portable toilets in the field as long as transportation is available to get them to a toilet.

Gray discusses the special problems, long recognized, of organizing farm workers. While there have been some successes—with grape harvest in California, tomatoes harvest in Ohio and Florida— these have occurred when large numbers of migrants worked on particular farms. On small farms (with a dispersed population of workers, isolated by geography, legal status, and lack of transportation) there is a special challenge.

Another topic explored is the reality that a lot of the small and medium size farmers in the Hudson Valley and elsewhere operate with relatively low net incomes. Obtaining health insurance for their families and putting enough money away for their children’s education and their own retirement are challenging for these farmers, to say the least. Even those with social concerns feel that they can’t pay their workers any more than they do.

The dilemma is inherent in our system, in which large-scale industrial methods and farms produce a lot of relatively low cost food. Small farms using ecologically sound and humane practices, while not directly in competition with industrial farms, are still limited by them in the prices that can be charged.

Gray discusses organizations that are trying to bring the issue of social justice for farm workers front and center and many have gathered significant support from the public. The ultimate hope is that social justice for farm workers can be incorporated into the issues that concern and motivate locavores. But there is a long road ahead to bring humane working conditions with better treatment and better pay to workers on the farms so prized by those who promote and participate in the locavore movement.

However, a socially just and ecological sound food system is essentially impossible to achieve within an economy and society that is unjust and especially good at allowing businesses pollute the environment.