Until rich countries are held to account for the economic and environmental crimes they have committed, no foreign leftist has a right to denounce the Ecuadorean government led by Rafael Correa for using the country’s natural wealth to meet its peoples’ needs.

Criticism of Latin America’s radical governments has become common currency among much of the international left. While none have been exempt, Ecuador’s government of President Rafael Correa has been a key target. 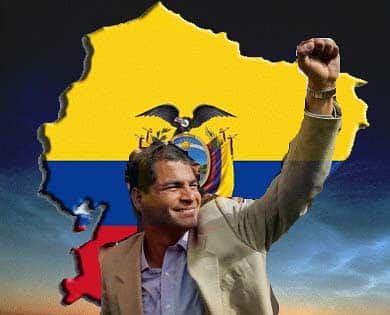 But a problem with much of the criticism directed against Correa is that it lacks any solid foundation and misdirects fire away from the real enemy.

Correa was elected president in 2006 after more than a decade of mostly indigenous-led rebellions against neoliberalism.

During his election campaign, the radical economist promised to rewrite the country’s constitution, reject any free trade agreement with Washington, refuse to repay of illegitimate foreign debts and close a US military base on Ecuadorian soil.

The social movements had campaigned around many of these demands, which is why most supported Correa in the second-round presidential run-off against Alvaro Noboa, Ecuador’s richest man.

Since then, Correa has largely carried out these election promises. This explains why he has an approval rating of more than 80%, a June 13 opinion poll found.

Raul Zibechi, a Uruguayan journalist whose anarchist-leaning writings have been widely distributed among the English-speaking left, has denounced the Correa government for presiding over “a new model of domination.”

Zibechi said that today the state plays a larger role in Equador’s economy. But he said the state has simply replaced the role of the market as the principle guardian of transnational interests, which continue to loot the nation’s wealth unabated.

He said as the Correa government “depends on oil exports and mining concessions to make ends meet … resistance now no longer faces multinational corporations, but rather the state apparatus.”

The criticisms of Correa are not just limited to the anti-state left. In a May 2 article, US Marxist academic James Petras said Correa’s claims to be renegotiating a better deal for the country were false. Petras said:

“The style and substance of the distribution of the powers and privileges in the oil and gas agreements between progressive governments and the multinationals are no different than what transpired under previous ‘neo-liberal’ regimes.”

He said Correa has instead deepened the country’s reliance on agro-mineral and energy exports in its pursuit of “extractive capitalism.” This is because “state revenue and growth” are now “utterly dependent on the increasing demand for raw materials, high commodity prices and open markets.”

Zibechi and Petras agree that Ecuador today is as much or more dependent than before on raw material exports, while transnational corporations reap the rewards.

Zibechi said this reliance on export-driven growth and revenue derived from natural resources — the logical consequences of “extractive capitalism” — has converted the Correa government into the main enemy for those opposed to this “new form of domination.”

These statements bear no resemblance to Ecuador’s economy or the policies pursued by the Correa government.

There is little evidence that transnationals extract more of Ecuador’s wealth, raw materials or profits. Oil production, the main extractive industry in Ecuador, has fallen from 195.5 million barrels in 2006 to 182.3 million barrels last year.

Crude oil exports have also fallen. The US remains the biggest market for Ecuador’s crude oil, but falling export volumes to the US have been offset by an almost five-fold rise in exports to Latin American countries. In the same period, the state’s share of oil production has risen from 46% to more than 70%. Last year, transnationals extracted less that half of what they did in 2006.

Oil prices have risen during this time, but this has been accompanied by government measures to ensure more wealth stays in Ecuador, at the expense of transnationals.

In October 2007, the Correa government increased the windfall tax on profits (accrued when oil prices surpass those set down in the contracts signed between companies and the state) from 50% to 99%. It shifted the tax back to 70% when oil prices fell sharply at the end of 2008.

The government also dismantled several oil funds set up under past neoliberal governments that directed oil revenue towards repaying foreign debt. The state’s oil revenue has been consolidated into the government’s budget.

Similarly, Ecuador’s ability to recover from the 2008 global economic crisis and register record economic growth was not export-driven or dependent on the oil sector.

Rebecca Ray, who co-authored a report on Ecuador’s economy for the US-based Center for Economic and Policy Research, told the Real News Network that Ecuador was among the quickest countries to recover from the global crisis because “it developed its domestic market and it took care of its people domestically rather than trying to ride out the global commodity wave.”

One important move was the government’s decision to provide grants to first homebuyers and make available low-interest mortgage loans. This boosted the building industry, which became the main driver of growth. It accounted for more 40% of Ecuador’s GDP growth last year. Other key areas of growth have been agriculture, manufacturing and commerce.

Ecuador’s revenue from exports fell 25% in 2008-9, with falling oil prices being a key contributor. But the economy was better able to cope due to rising internal consumption, aided by much higher social spending and wage hikes.

The Center for Economic and Policy Research report said: “Between 2006 and 2009, social spending nearly doubled as a percent of GDP … and spending on social welfare more than doubled – from 0.7 to 1.8 percent of GDP.”

It also said the minimum wage “has risen about 40% in real terms over the last five years.”

Workers have also benefitted from the introduction of the “dignified salary”, whereby Ecuadorian law requires “any business earning a profit [to] first distribute that profit among its employees, until either the employees’ total earnings rise to the level of a living wage or the entire profit has been distributed before reporting the remainder as its final profits.” These policies have lead to a fall in poverty rates and unemployment.

It is evident that Ecuador’s government, with the support of the people, has stemmed the flow of oil wealth out of the country and begun redirecting it towards meeting ordinary peoples’ needs.

This is not to suggest that Ecuador does not continue to face big challenges; much less that capitalism has been overthrown. There is still a long way to go.

A study by Ecuador’s National Secretariat of Planning and Development (SENPLADES) has shown that almost US$45 billion in public investment and recurring costs will be needed in order to eradicate poverty in Ecuador by 2021.

This is 10 times more than Ecuador’s annual budget for infrastructure investment.

To end poverty, all Ecuadorians would need access to basic services such as water, housing, electricity, transport, water irrigation, sewerage and education and health facilities, among others.

On top of this, it is true that Ecuador’s economy has not fundamentally changed under Correa. The path towards industrialisation and diversification of the economy has been slow and full of hurdles.

The continued existence of a capitalist state apparatus designed to serve the interests of the old elites, not the people, compounds these problems.

Valid criticisms can be made of the impacts that oil extraction, and recent moves to open up a new open-cut mine, have had on local communities. There has also been a lack of government consultation about these projects.

But this is not the same as accusing the Correa government of presiding over some form of “extractive capitalism” that does the dirty work of transnational corporations. This claim lacks any factual basis. Ultimately, it pits leftists against the very same people they claim to support.

No government, even one that comes to power on the back of an insurrection and destroys the capitalist state, would be able to meet the needs of the Ecuadorian people while at the same time halting all extractive industries.

However, it can attempt to strike a balance between protecting the environment and satisfying people’s needs, while empowering the people to take power into their own hands. The difficulty of such a task means mistakes will be made, but also learnt from.

To overcome Ecuador’s legacy of dependency on extractive industries, rich imperialist nations will need to repay their historic debts to Ecuador’s people.

The lack of any willingness to do so has been shown by the response from foreign governments to the bold Yasuni-ITT initiative launched by the Correa government in 2007.

The proposal involves Ecuador agreeing to leave 20% of its proven oil reserves (located in the Amazon) in the ground. In return, it asked Western governments and other institutions to provide Ecuador with funds equivalent to 50% of the values of the reserve, about US$3.6 billion, over 13 years.

So far, Ecuador has been offered a paltry $116 million.

Until rich countries are held to account for the crimes they have committed against countries such as Ecuador — something that will require revolutionary struggles breaking out elsewhere — no foreign leftist has a right to denounce the Ecuador government for using wealth from its natural resources to meet peoples’ needs.

Environmental concerns are valid, but so are the very real needs of people to be able to access basic services that many of us take for granted. And we should never forget who the real culprits of the environmental crisis are.

Rather than aiming their fire on a supposed “new model of domination,” leftists would do better to focus on the real enemies we and the Ecuadorian people face in common. Ecuador’s fate is intertwined with our fight against Western governments and corporations at home.