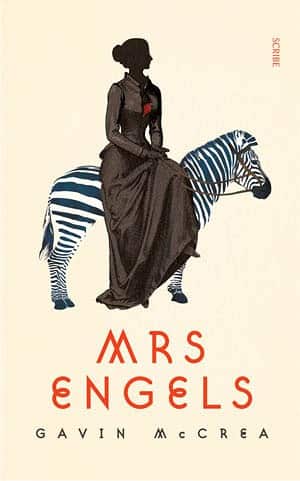 For those hankering to know what Friedrich Engels’ erect penis looked like, page 37 of this novel is for you. “In its vigours, it points up and a bit to the side,” says Lizzie Burns, the first-person narrator of the entire story.

She goes on: “Its cover goes all the way over the bell and bunches at the end like a pastry twist. Before he does anything he spits on his hand and peels this back.” Engels is quite enamoured of his member, it seems.

Gavin McCrea’s Lizzie Burns is a brilliant narrative voice and his writing sparkles. Lizzie’s rich brogue and her incisive humour are wonderful.

McCrea minutely researched daily life in Victorian England in order to bring domestic details to life — you can smell the stench and feel the press of the bodies. And if ever you thought that running a house with servants was easy Lizzie Burns has a thing or two to explain to you.

Eleanor Marx knew Lizzie Burns well. She wrote that “she was true, honest and in some ways as fine-souled a woman as you could meet.” But McCrea has Lizzie Burns represent herself as an opportunist, manipulating Engels for her own financial security while grappling with her confused affections, which gives an inkling of his book’s failings.

Engels was Karl Marx’s closest collaborator. More than that, his financial support was vital for keeping the Marx family together body and soul — and funding the activities of many European revolutionaries.

Engels did this by working in his father’s Manchester cotton mill for decades. In Manchester he fell in love with Lizzie Burns’ older sister, Mary, and lived with her devotedly for 20 years.

It was Mary Burns (and possibly Lizzie) who led him through the mean backstreets and working-class quarters that Engels famously depicted in The Condition of the Working Class in England.

After Mary’s death Lizzie and Engels became lovers. The novel switches backwards and forwards in time to incorporate all these events.

But the events are refracted through McCrea’s blurred prism and his vision is limited. He has Mary and Lizzie working in the Ermen and Engels Manchester mill, which is unsupported by history. In fact, it is unlikely that they ever worked in any mill.

Excluded from this novel is the fact that the Burns sisters introduced Engels to Irish revolutionaries in Manchester. He was very impressed by them, despite not agreeing with their direct-action politics.

Engels became fascinated by Irish history through Mary and Lizzie Burns’ story-telling and appreciated Gaelic music and culture. Engels’ and Marx’s interest in Ireland, a significant part of their politics, was ignited by their contact with the Burns sisters.

Engels went on a long tour of Ireland with Mary to experience Irish life and culture and he intended writing a book about Irish folk songs.

According to Paul Lafargue, husband of Laura Marx, Lizzy Burns was “in continual touch with the many Irishmen in Manchester and always well informed of their conspiracies.” But McCrea has Lizzie displaying hostility towards Irish nationalism, only getting accidentally involved with it through an obsessive sexual relationship with a Fenian. He pictures Engels as being dismissive of the rebels, reflective of his general intellectual arrogance.

In fact, McCrea represents both Engels and Marx as muddle-headed academics disconnected from the working class and with no understanding of real struggle. That the secret police of many governments should have spied on these people appears inconceivable.

McCrea is at his worst in depicting the Marx household women. Jenny Marx, Karl’s wife, is depicted as aloof and manipulative of Lizzie, while despairing of being a “political wife.”

In Mary Gabriel’s biography of Jenny and Karl Marx, Love and Capital, it is said that Marx regarded Jenny as an intellectual equal who contributed to and understood his work. Gabriel says that Jenny was Marx’s “most trusted intellectual sounding board” and that “neither his heart nor his head functioned without her.”

Jenny Marx worked tirelessly beside her husband for years, preparing his manuscripts for publication and corresponding with continental revolutionaries. Her revolutionary work is demeaned by McCrea.

Things get worse with Helene Demuth, the household servant and the mother of Marx’s illegitimate son. Contemporary visitors recorded that she was the dominant personality in the home.

Demuth‘s revolutionary contribution was to hold the household together in a period before modern refrigeration or appliances, a gargantuan task requiring grit and intelligence. Hundreds of political refugees came through the Marx household and, no matter how short the cash, all were fed.

After Marx’s death, Demuth moved into the Engels-Lizzie Burns household, managing it and working with Engels on the publication of Marx’s writings. None of this appears in this novel.

Like Lizzie Burns, Helen Demuth was illiterate, so no record exists of their authentic voices. McCrea fills the void in Demuth’s case by portraying a timid, inarticulate, abject soul, lingering in the shadows, ordered about by the aristocratic Jenny.

The historical record is chock full of the mighty deeds of the revolutionary party coordinated out of the Marx household. And it is equally full of the myriad eccentricities and failings of the flesh and blood Marx and Engels, their occasional drinking bouts and bawdy behaviour — and the strength of the women around them.

Mary Gabriel says the story of this group is of “brilliant, combative, exasperating, funny, passionate and ultimately tragic figures caught up in the revolutions sweeping 19th century Europe.”

Why McCrea has chosen to turn his back on those realities and instead create a Lizzie Burns passively observing and misunderstanding the events she moves through is inexplicable.

Were this book based on imaginary characters and entitled, say, Mrs Smith, even with the quality of its writing it would never have been published. It is only because it purports to be based on the history of the Marx-Engels circle that it attracts attention.

Students of Marxism will be amused by how McCrea playfully inserts Marxist phraseology. For example, a chapter entitled “The Inverted World” — a reference to Marx’s writings on working class alienation — is about Lizzie coping with stroppy house servants. But playing with phrases as if in a sandpit does not add up to an understanding of Marxism. McCrea’s book is yet another, tawdry anti-communist tract.

What is more, McCrea appears to have spotted a market niche and has announced his intention to write two more historical novels based on the lives of communist women. Oh dear!

Gavin McCrea’s writing is excellent but his grasp on communist politics is as skewed as his grasp of Engels’ dick.

Barry Healy is a Socialist Alliance activist in Perth, Western Australia. This review was first published in Links International Journal of Socialist Renewal.

Editors’ note: I was planning to review Mrs Engels this week, but I returned from vacation to find that Australian socialist Barry Healy had written just what I wanted to say about this disappointing book. My only disagreement is with his acceptance that Freddy Demuth was Marx’s son, a claim that based on very limited and questionable evidence. Apart from that, Barry has it just right — Mrs Engels is a well-written book that unfortunately distorts the facts about life in the Marx-Engels circle. — Ian Angus