Massive flooding devastates Manila slums .Another painful reminder that the pain caused by climate change is being felt most by the poor and most oppressed. 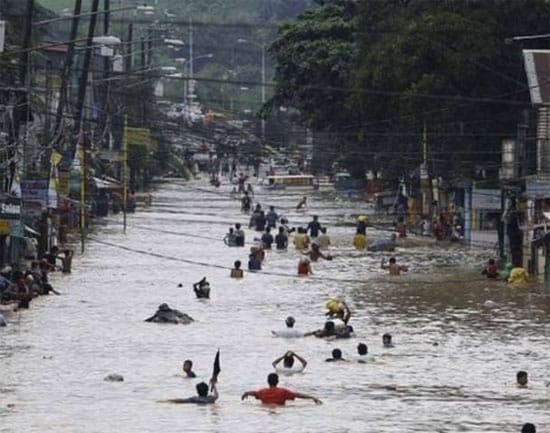 “The situation is pretty grim,” Reihana Mohideen told Green Left Weekly from the frontline of devastating floods that have submerged half of Manila over the last few days. “It’s still raining hard and hard to get around.”

“This is another painful reminder of the global climate change crisis and the pain is being felt most by the poor and most oppressed.”

“We’ve just left Barangay Industrial Valley Complex in Marikina, where we were delivering lugaw [rice porridge]. Still flooded here. People are cleaning out rubbish that has collected near their homes. Some said that they hadn’t eaten since last night and were quite angry that we got there only today.”

“We are appealing for aid and volunteers (to help distribute aid) to come directly to our office at: #13 Rigor St., Brgy. Masagana, Proj. 4, QC.”

These are the worst floods since catastrophic floods in 2009 which killed more than 460 people. The death toll from the current floods is 56 but expected to rise. Already more than a quarter of a million people have fled their homes.

“These massive floods are caused not by a typhoon but by a monsoon rain,” Mohideen explained. “The flood waters though have reached the same levels or even exceeded that during typhoon Ondoy in 2009.”

“This emerging pattern of increasingly extreme weather conditions has to be related to climate change, and those suffering the worst impact of it are the poor. The lack of adequate housing, drainage and canals, water catchments to collect water, hit the urban poor who are more than 80% of the population in Metro Manila, especially hard. This, combined with lack of information and awareness means the adaptation mechanisms of the population is extremely weak.

“We are doing what we can. but the only way that disasters on this scale can be mitigated is through the state, or government intervention. For example, today we couldn’t reach some of the communities from where our organisers were appealing for assistance because of the floods. We need boats and helicopters to get out. But for this we need a government committed to the interests of the people. A government that is based on the protection of elite rule will not be able to effectively handle disaster response and such crises.

“We know how effectively Cuba handles disaster response. It has been identified as a world’s best practice by the UN. The Philippine government is far cry from the Cuban standard.

Through the people’s organisation, Transform Asia, an international appeal for emergency aid has been issued.

UPDATE: Now donations can be made via PayPal.

Or donate directly to the flood appeal by transferring money to:

“In Marikina City, the river water level breached and continues to be above critical level. Due to this, more than 5,000 families have been relocated to evacuation centers.

“Our members from the tricycle sector in the City who rely on day-to-day work have not been spared. In fact the 2,000 families who depend in these three-wheeled livelihood have been doubly hit. While floods have forced them out of their homes, floods have also denied them work and income. Tricycles soaked under water will take days before they are operated again.

“It is in this light that we seek your kind intervention for our members. We would like to request for relief goods which can help them cope and survive these trying times.”