In the Philippines, on the front line of climate change, poor people and communities are demonstrating powerful solidarity, while politicians promote their careers and corporations worry only about profits 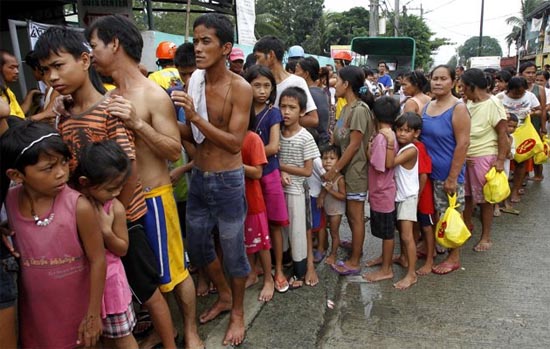 The statement below was released by the Partido Lakas ng Masa, (PLM, Party of the Labouring Masses), a socialist party in the Philippines that has played an important role in organizing relief for the million people made homeless by recent floods in Manilla.

“I think human solidarity is a basic trait of our people. Especially if it’s not mediated by people and institutions that want to profit at the expense of others, like the trapos who use the occasion to campaign for the coming elections. The president’s entourage, which boarded a truck that waded through the floods in Pasig City, consisted of senatorial candidates in the coming 2013 elections; shame on them. Or like the pharmaceutical companies and other capitalist corporations which raised the prices of their goods to astronomical figures because of big demand.

“Outside of these elite creatures and capitalist institutions, the ordinary people responded in the most humanely way. Most of the support we collected came from workers and urban poor residents too. They donated dry clothing, provided cooking utensils and helped out in the feeding stations we set up in the evacuation centres. People’s solidarity is a latent component that exists even in the capitalist system. We have to nurture it and provide an environment for it to fully develop by changing the system.” [Lessons from Manila Flood Disaster]

While organising relief activities for communities hard hit by the devastating floods, the Partido Lakas ng Masa (PLM) believes that a political campaign is urgently needed, targeting the inadequacy of government preparedness and response to the flood disasters.

The emerging pattern of extreme weather conditions is related to climate change and while the solution to the climate crisis, given its global parameters, cannot rely on countries such as the Philippines, those suffering the worst impact of the crisis are again, the poor in our countries. The biggest calamity is poverty and mass poverty is the most critical and underlying issue that must be addressed in order to protect and save peoples lives.

This means, among others, the provision of secure employment and a living wage, quality and affordable housing, health and education, electrification and water. While we believe that a program of poverty eradication is the only effective climate crisis mitigation and adaptation strategy, we also put forward the following urgent and necessary measures to mobilise the PLM base communities.

According to Secretary Butch Abad there is around P6 billion still available in calamity funds for disaster response and rehabilitation. We call for these funds to be released immediately and prioritised for strategic investments in local infrastructure rehabilitation and development. Solutions to the flooding will require massive efforts to improve local infrastructure, such as adequate drainage systems, canals, flood barriers, permanent structures for evacuation with adequate water, sanitation, power and health facilities, as well as a focus on the development of environmental infrastructure, such as the protection and restoration of urban watersheds.

All people have the right to decent housing. A public housing program is an urgent necessity to ensure that the poor are adequately sheltered and protected against floods, typhoons and earthquake. The government must urgently undertake a massive public housing program to provide low-cost and disaster resistant housing in urban poor communities.

Land prices in Metro Manila and other major centres should be regulated to provide greater residential options for the people. The floods and other calamities must not be used as a reason to start demolitions of squatter areas and poor communities. We continue to call for a moratorium on demolitions until suitable relocation programs are put in place, prioritizing on-site, in-city relocation.

Adequate health care provisions must be prioritised as a central aspect of disaster response and preparedness.  We call on the government to immediately mobilise all available health-care professionals and other resources to attend to families in evacuation centres and flood affected communities.

An immediate price ceiling needs to be enforced on essential drugs. Unscrupulous speculators in essential drugs should be jailed, such as those drug companies responsible for increasing the cost of drugs to treat leptospirosis by 750% during the calamity. In the mid-term the government must commit to establishing a genuine system of universal and quality health care, based on preventative approaches and decentralised delivery systems, affordable to all.

The government has to foster a culture of safety, of disaster prevention and preparedness, rather than disaster response. This requires a massive information and education campaign to be launched in schools, communities and the public at large, ranging from the problems and vulnerabilities related to climate change impacts and practical steps focussed on strengthening disaster preparedness. We need a properly educated population, with a high-level of understanding and awareness of the issues, responsibilities of various government agencies and their own rights.

The people, the local communities, must be in control. Community members have to be involved in the decision making, in the planning and preparation and in budgeting, based on participatory budgeting and decision-making processes, such as peoples assemblies. The Barangay councils, for example, must be transformed into peoples assemblies involving all the households in the Barangay.

These short-term and mid-term measures require a massive redistribution of wealth, from the billionaires and their political representatives, to the tens of millions of the poor.

The PLM believes that a fundamental transformation of our political system is necessary, starting with the establishment of a government committed to the dismantling of elite rule – the rule of the handful of big capitalist families who run this country and control its political institutions.

Through the people’s organisation, Transform Asia, an international appeal for emergency aid has been issued. Donations can be sent to:

Transform Asia Flood Appeal:
Now donations can be made via PayPal.