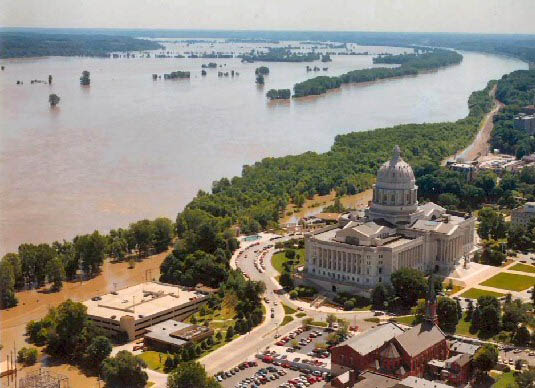 Flood waters inundated parts of Jefferson City, Missouri, and threatened the Missouri State Capitol during the “Great Flood of 1993.”

As floodwaters surge along major rivers in the midwestern United States, a new study from Washington University in St. Louis suggests federal agencies are underestimating historic 100-year flood levels on these rivers by as much as five feet, a miscalculation that has serious implications for future flood risks, flood insurance and business development in an expanding floodplain.

“This analysis shows that average high-water marks on these river systems are rising about an inch per year — that’s a rate ten times greater than the annual rise in sea levels now occurring due to climate change,” said Robert Criss, PhD, professor of geology in the Department of Earth and Planetary Sciences in Arts & Sciences and author of the study.

Published this month in an advance online issue of the Journal of Earth Science, the findings are important, Criss said, because many of the nation’s flood-control river levee systems are not engineered to withstand floods that rise much higher than the projected 100-year flood level.

Any flood that rises even a few inches over the top of a 100-year levee has the potential to cause a catastrophic breach of the flood control system, he warns.

Based on complicated equations currently used by key federal agencies, such as the Federal Emergency Management Agency (FEMA) and the U.S. Army Corps of Engineers (USACE), the official 100-year flood level is a key national index of potential flood severity. Levees are commonly designed to withstand floods at “100-year” levels and “100-year” flood zones are delineated on detailed flood insurance maps produced by FEMA.

Criss, a hydrogeologist who has studied water flows on major rivers for decades, has long argued that man-made river control systems, such as levees, locks, dams and navigation-enhancing dikes, have gradually increased the odds of catastrophic flooding by tightly constricting river channels and preventing floodwaters from flowing naturally into surrounding wetlands and floodplains.

Global warming and the resulting increase in extreme weather cycles has only added to the flooding risk in recent years, he said.

In his study, Criss argues that the statistical formulas now used to set federally-recognized official levels for 100-year flood events are grossly inaccurate because they assume conditions are the same as they were many decades ago, when the rivers were relatively untamed and global weather patterns were more consistent.

In a 2008 study, he showed that flooding patterns along the Mississippi River near Hannibal, Missouri, were already in an extreme range — far beyond what would be expected using the official federal flood risk calculations.

“Such outcomes are far too unlikely to be attributed to a nearly continuous succession of statistical flukes, and instead must be attributed to faulty calculation of flood risk,” Criss said. “Many factors such as climate change and in-channel structures are causing flood levels to rise, so realistic estimation of future flood levels must take these changes into account.”

Criss’ study proposes a new statistical equation for the analysis of environmental variables that are changing over time. Criss applied his equation to the well-recorded history of peak water levels or “stages” that occur as a flood reaches its highest crest of the year.

“Official calculations emphasize discharges (flows) in flood risk analysis, yet many compelling reasons show that water levels (stages) should be used instead,” Criss said. “Stages are easily understood and are, in fact, the most relevant quantity. If floodwaters are encroaching a home, the owner is concerned about the water level, not about the discharge of the river.”

For example, he notes that the river level or “stage” of the Mississippi River at St. Louis has been recorded almost every day since 1861. A simple statistical analysis that assumes no change since 1861 in factors that might contribute to flooding would suggest that the St. Louis riverfront would experience an historic flood of about 44.6 feet about every hundred years, which is slightly less than that predicted by the discharge-based formulas currently used by the FEMA and the Corps of Engineers, Criss said.

Robert E. Criss, Ph.D., analyzed data from the Lewis and Clark expedition and says it shows that the Missouri River today is but a shadow of what it was 200 years ago, narrower and more prone to serious flooding.

Using the Criss equation, which gives more weight to modern river conditions, the present-day (2015) projected high water mark for a 100-year flood event on the St. Louis riverfront would be 51.5 feet, or more than 21 feet above flood stage.

“The official calculations for the ‘100-year’ flood level at St. Louis are about 5.5 feet too low, primarily because they neglect both the tendency for the flood levels to increase over time and the increased volatility we’re seeing with extreme weather swings,” Criss said.

While a miscalculation of a few feet may not seem like a problem, it can make a huge difference when it comes to the reliability of our existing flood control systems.

In St. Louis, for instance, the present-day St. Louis flood wall was built in the 1960s at a height of 52 feet to handle a flood volume last experienced in St. Louis during 1844. The 100-year flood of 1993 rose to the highest level ever recorded in the city, reaching nearly 20 feet above flood stage and within two-and-a-half feet of overtopping the city’s flood wall system.

“In other words, if we experience another flood on the Mississippi of the proportions seen in 1993, it’s hard to say whether the floodwalls protecting St. Louis would be high enough to prevent extensive flooding in the downtown area,” Criss said.

The Criss equation shows similar miscalculations of the official 100-year flood levels for many Midwestern cities and towns along the Mississippi, Missouri, Ohio, and Illinois rivers, including some large metro areas. He suggests it’s time for these communities to reassess their flood protection systems and to prepare now for higher flood crests.