Unprecedented global temperatures made last month the hottest September since 1880. 2020 will likely be one of the three warmest years on record. 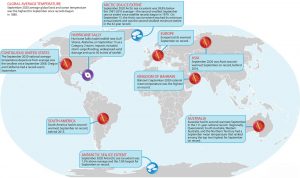 Unprecedented heat around the world vaulted September 2020 to the hottest September since 1880, according to the latest monthly global climate report from the U.S. National Oceanic and Atmospheric Administration (NOAA).

The month’s warmth also contributed to 2020’s trend as a remarkably hot year, with the year-to-date global temperatures running second highest in the 141-year climate record.

Averaged as a whole, the September 2020 global land and ocean surface temperature was the highest for September in the 141-year record at 0.97°C  above the 20th century average of 15.0°C.

This surpassed the previous records set in 2015 and 2016. September 2020 marked the 44th consecutive September and the 429th consecutive month with temperatures above the 20th century average.

On September 15, sea ice covered just 1.44 million square miles of the Arctic, the second-smallest minimum extent on record, behind September 17, 2012. The 14 smallest minimum annual extents have all occurred in the last 14 years.

The year-to-date (YTD) average global temperature was the second hottest on record at 1.02ºC above the 20th-century average. This is only 0.04ºC shy of the record set for the same YTD in 2016.

Europe, Asia and the Gulf of Mexico had their warmest January-through-September period on record,  South America and the Caribbean region had their second highest. No land or ocean areas had record-cold YTD temperatures.

According to statistical analysis by NOAA scientists, 2020 will very likely rank among the three-warmest years on record.