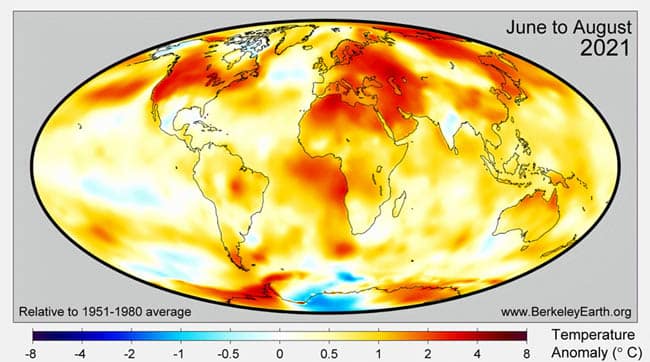 The year so far has been one of extremes, featuring record-shattering heatwaves, wildfires and flooding, as well as the warmest-ever meteorological summer – June, July and August – in the global land-surface record. As a whole, the world is on track to have its fifth to seventh warmest year on record – depending on the dataset examined and how the last three months of the year play out.

The year had a relatively cool start due to remnants of a La Niña event in late 2020 and early 2021. Warm land temperatures over the past few months have been balanced out by cooler ocean temperatures as La Niña conditions have re-emerged.

This year will not set a new global temperature record – but, even in a warming world, most individual years will not. Temperatures will end up around expected levels given the long-term warming trend over the past 50 years and are consistent with projections from climate models.

The first nine months of the year saw record concentrations of major greenhouse gases – CO2, methane and nitrous oxide – in the atmosphere. Arctic sea ice extent was low for much of the year, but recovered in late summer to set a minimum level on the 12th lowest on record.

The summer of 2021 saw extreme heat events, extreme rainfall and flooding, catastrophic wildfires and other extreme events across the world. With data through to the end of the summer now available, Carbon Brief can now confirm that the meteorological summer of 2021 was the warmest summer on record for the world’s land areas – and the fourth warmest summer on record for the globe as a whole (ocean, land and air).

While global temperatures are a key indicator of climate change, no human experiences the global average. Land regions have, on average, warmed around 50% faster than the world as a whole, with higher latitude land regions warming faster still. The figure below shows summer – June, July and August – temperatures from the Berkeley Earth dataset between 1850 and 2021. Each red dot represents the average temperature over the three summer months.

The exceptional temperatures in 2021’s summer were not uniformly hot. Some regions saw records shattered, while others were closer to average – though a few regions also saw cooler-than-average temperatures.

The Northwestern part of North America, Eastern Europe, the Middle East, Northern Africa, and Siberia all experienced exceptionally warm summer temperatures. China, sub-Saharan Africa, South America and Australia were modestly above average, while parts of Central America and India were below average. (The average being defined as the 1951-1980 baseline period used by Berkeley Earth).

Cooler than past few years – but still near-record warm

The figure below shows the temperature anomalies – changes relative to the 1981-2010 average temperature – for each year since 1970, along with the average over the first nine months of 2021.

(Note: at the time of writing, September data was not yet available for the Hadley/UEA or Berkeley Earth temperature records, so the average over the first eight months is shown for those datasets.)

Surface temperature records have shown around 1C warming since the year 1970, a warming rate of about 0.19C per decade. The results vary a bit across datasets due to different observations used, adjustments for changes in measurement techniques over time, and methods used to fill in gaps between measurements.

The figure below shows how temperatures so far in 2021 (black line) compare to prior years in the NASA GISTEMP dataset. It shows the temperature of the year-to-date for each month of the year, from January through to the full annual average.

So far, 2021 is tied for the 5th warmest to date with 2015 and 2018. It had a cooler start than those years, but warmer temperatures over the past few months have pushed year-to-date values upwards. However, with a growing La Niña event in the tropical Pacific, it remains to be seen whether temperatures will remain relatively warm.

February 2021 was unusually cool for the globe as a whole compared to recent years – clocking in at between the 12th and 16th warmest year on record. February was still warm compared to most prior years, however – all but 15 or so years since records began in the mid-1800s had Februaries that were cooler.

Temperatures notably warmed by June 2021, with each month between June and September being between the 2nd and 6th warmest on record, though no months set a new record in 2021 for the global as a whole.

El Niño and La Niña events – collectively referred to as the El Niño Southern Oscillation, or ENSO – are the main driver of year-to-year variation on top of the long-term surface warming trend. ENSO events are characterised by fluctuations in temperature between the ocean and atmosphere in the tropical Pacific, which help to make some years warmer and some cooler.

El Niño years tend to be warmer than average, while La Niña years tend to be cooler. There is generally a lag of around three months between when ENSO conditions peak in the tropical Pacific and when their effects on global temperatures are most strongly felt.

Late 2020 and early 2021 saw moderate La Niña conditions that contributed to relatively cool global temperatures in the early part of 2021. ENSO conditions were neutral for much of the spring and summer, before returning to modest La Niña conditions in September and October.

Models now forecast that modest-to-moderate La Niña conditions will persist through the first quarter of 2022. This may result in 2022 being a bit cooler than the past few years as well, though it is too early to know for sure.

On track to be 5-7th warmest year on record

Using the data from the first nine months of the year, plus both past and forecast future ENSO conditions, Carbon Brief has produced a prediction of where 2021 temperatures will most likely land for each different surface temperature record. With data for the first three-quarters of the year in, there is virtually no chance that any of the surface temperature records will show 2021 as above the 5th warmest or below the 7th warmest year on record. At the time of publication,

While all three datasets produce similar projections for 2021 annual temperatures, there are slight differences that result in different rankings. This year is most likely to be the 7th warmest on record in the NASA dataset, 6th warmest in NOAA and 5th warmest in Copernicus/ECMWF.

The figure below shows the 2021 to-date temperatures and annual 2021 projected temperatures (with uncertainties) for Copernicus/ECMWF’s ERA5, along with the long-term temperature trend based on data from 1979-2020. While 2021 temperatures will be lower than many of the past few years, they are quite consistent with the longer-term warming trend due to human emissions of CO2 and other greenhouse gasses.

With each month of additional data, the uncertainty in the expected 2021 annual temperature shrinks as there are fewer remaining months to change the average.

The figure below shows the range of individual models forecasts featured in the Intergovernmental Panel on Climate Change’s (IPCC) fifth assessment report – known collectively as the CMIP5 models – between 1970 and 2030, with grey shading and the average projection across all the models shown in black. Individual observational temperature records are represented by coloured lines.

While global temperatures were running a bit below the pace of warming projected by climate models between 2005 and 2014, the last few years have been pretty close to the model average. This is particularly true for globally complete temperature records, such as HadCRUT5, NASA, Berkeley Earth and the Copernicus/ECMWF reanalysis, which include temperature estimates for the whole Arctic.

Greenhouse gas concentrations reached a new high in 2021, driven by human emissions from fossil fuels, land use and agriculture.

Three greenhouse gases – CO2, methane (CH4) and nitrous oxide (N2O) – are responsible for the bulk of additional heat trapped by human activities. CO2 is by far the largest factor, accounting for roughly 50% of the increase in “radiative forcing” since the year 1750. Methane accounts for 29%, while N2O accounts for around 5%. The remaining 16% comes from other factors including carbon monoxide, black carbon and halocarbons, such as CFCs.

Human emissions of greenhouse gases have increased atmospheric concentrations of CO2, methane and nitrous oxide to their highest levels in at least a few million years – if not longer.

The figure below shows concentrations of these greenhouse gases – in parts per million (ppm) for CO2 and parts per billion (ppb) for methane and nitrous oxide – from the early 1980s through July 2021 (the most recent data currently available).

Global concentrations of CO2, methane (CH4) and nitrous oxide (N2O). Based on data from NOAA’s Earth Systems Research Laboratory. Note that the y-axes do not start at zero.

The atmospheric concentration of CH4 began to increase again in 2006 after a plateau from 1999. It further sped up since 2014, with roughly linear growth of 8ppb each year since. Unlike CO2 and N2O, CH4 has a relatively short atmospheric lifetime and does not accumulate in the atmosphere in the long term. This means that – to a first approximation – the level of CH4 in the atmosphere is directly proportional to the level of emissions over the past decade.

While there are some complications around changes in the ability of the atmosphere to remove CH4 over time (through interactions with the OH molecule), the rise in methane concentrations in recent years strongly suggests that global emissions of CH4 have also been increasing.

Highly accurate observations of Arctic and Antarctic sea ice have been available since polar-observing satellites became available in the late 1970s. Arctic sea ice extent was at extremely low levels for much of the first half of 2021, setting new records in parts of both June and July.

The figure below shows both Arctic and Antarctic sea ice extent in 2021 (solid red and blue lines), the historical range in the record between 1979 and 2010 (shaded areas) and the record lows (dotted black line). Unlike global temperature records, sea ice data is collected and updated on a daily basis, allowing sea ice extent to be viewed through to the present.

Arctic and Antarctic daily sea ice extent from the US National Snow and Ice Data Center. The bold lines show daily 2021 values, the shaded area indicates the two standard deviation range in historical values between 1979 and 2010. The dotted black lines show the record lows for each pole.

However, sea ice extent only tells part of the story. In addition to declining ice extent, the sea ice that remains tends to be younger and thinner than ice that used to cover the region.