Voting for liberals won’t work. Nor will isolated actions by small groups. Building mass movements is hard work, but it is the only way to win 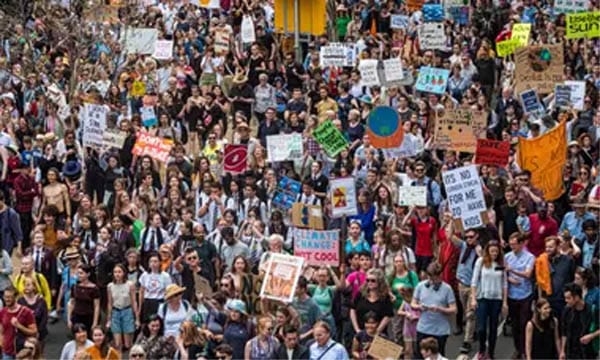 Faced with a global triple crisis — health, economic and climate — it is no wonder most people believe the world is heading in the wrong direction. But who people blame for this situation and their responses have varied.

Socialists believe the capitalist system is at the heart of these crises and that the solution lies in replacing it with a democratic socialist society.

The challenge we face

Under capitalism, corporations will always seek to defend their narrow interests. They do so by, among other things, funding political parties, opposition movements, media outlets and institutions that serve their agenda. But, while the capitalist class is united in its defense of capitalism — even at the cost of the Earth — different sections of the capitalist class have varying interests and views on how to best protect them.

Unsurprisingly, CEOs in the energy/natural resource sector are overwhelmingly behind Trump’s climate denialism. But when it comes to finance (Wall Street), technology (Silicon Valley) and the media, Biden is the preferred candidate. Many of these same sectors have also been involved in promoting climate institutes, campaign groups and even protests, such as last year’s Climate Strike.

This does not make these capitalists allies in the fight against climate change, racism and sexism. They just sense that taking such a stance is the best way to protect, and in some cases even raise, their profit margins.

Why does this matter? Because to achieve our aims, we need to know exactly who we are up against.

History shows capitalists have been willing to turn to fascist movements when faced with a serious challenge to their rule. But that is not what is happening today. Trump may be many things, but he is not a fascist. And while the danger that figures like Trump pose should not be understated, it is not the only, or even main, threat we face.

A much more present danger is the attempt by sections of the capitalist class to transfer masses of public wealth to “green” corporations, further commodify nature, take away political and civil rights and entrench global inequality, all under the guise of fighting climate change.

Parallels can be seen in the way many governments responded to Covid-19 through, among other things, the privatization of the state’s health response, curfews and restrictions on civil liberties, and leaving essential workers and migrants with no protection. Many on the left did little more than justify these responses, arguing it was “at least better than Trump” or that “something is better than nothing.” Their criticisms were limited solely to how certain measures were implemented.

The risk of repeating this same mistake when it comes to the climate crisis is high (and the cost even higher) if we ignore the realities of the challenges we face.

The movement we need

To best figure out what we do next we also need to understand where our side is at.

There are some positives we can point to. For example, public distrust in traditional political parties and institutions is higher than it has been for a long time. This makes it much harder for corporations to ensure their preferred parties win elections or govern stably.

There is no evidence this distrust will inherently find its expression on the political right or that a mass appetite for fascism exists. Insurgent left forces have been able to win support and, despite all his bluster and the power he holds, Trump has been one of the weakest presidents in recent US history.

It is also the case, though, that in almost every country in the world there are no mass movements of the kind we need to challenge the capitalist system. (The absence of such movements is a big part of why corporations today prefer the tactic of coopting emergent expressions of dissent rather than crushing them through fascism.)

What we do have are movements or, more accurately in Australia’s case, campaigns, that at best, question specific policies or aspects of capitalism. While many of these groups may have, for example, marched to “change the system not the climate,” that has not stopped them from imploring people to line up behind Biden.

In Australia, campaign groups sought to turn the previous election into a “climate referendum,” despite no major party offering any kind of serious plan to avert an ecoholocaust, let alone end capitalism.

This is not intended as a criticism of these campaigns. Rather, it is an acknowledgement that we are a long way from where we need to be to even begin to challenge capitalism.

Nor is it an argument for abstaining from campaigns or struggles. Socialists always seek to create spaces for working people to come together, organize and mobilize around concrete demands.

We seek to do this not because we believe workers are inherently revolutionary, but because we understand such struggles, which generally pit workers’ needs against those of capital, are schools in which workers can gain confidence, consciousness and the capacity to organize and unite. They help create the revolutionary subject required to bring about social change.

Because social change can only come about as a conscious effort of the vast majority, socialists constantly seek to maximize workers’ participation in such struggles.

It is important to be honest to ourselves about the current state of our forces, and not confuse, as we often do, a campaign for a movement, a movement for a rebellion and a rebellion for a revolution. Otherwise, false hope can very quickly turn into disillusionment.

We also have to patiently engage in a discussion about this with others, many of whom would prefer to focus their attention on winning over enlightened politicians or militant minority actions than do the hard but necessary work of winning over the majority.

The Green New Deal we want

In the process of thinking about how to build the movement we need, some on the left have raised the idea of a green new deal (GND). But what kind of GND do we need?

The GND is not a blueprint for an ecosocialist society, nor a program for socialist revolution.

The aim of any GND project should be to put forward a profoundly democratic plan that responds to the existing needs and demands of workers, sets out clear measures for beginning to tackle the triple crisis we face, and explains why such measures are possible and necessary. The aim should not be to call on existing movements to adopt a GND program nor build a separate, specific campaign or movement around such a plan.

Given the different views that exist within and between movements, the only vague chance we could have of uniting them all behind a GND would be if the program was premised on watered-down and abstract slogans. (This is already a problem with climate campaign groups focusing on demands such as “declare a climate emergency” or “climate action now.”)

Even then, any attempt to do this would lead to the fracturing of existing movements over disagreements regarding aspects of the program.

On the other hand, any movement around a program for solving the climate emergency today would be inherently removed from the realities of existing workers’ struggles, given such struggles are nowhere near raising even a partial program of measures for averting climate catastrophe. At best, such a campaign would represent a poor attempt to substitute for the real struggles we need to build.

Understanding that the concrete measures in the GND plan can only be won through serious organization and mobilization, where possible socialists would agitate for and throw themselves into campaigns and struggles around aspects of the plan.

We would seek to win concrete demands, even if only at the local level, to show in practice what a GND could look like and what it would take to win it.

Meanwhile, we would continue to outline our arguments for why only a radically different plan to those proposed by all sections of the capitalist class, can, at least, begin to put us on the path towards averting climate catastrophe.

Agitating for demands that intersect with peoples’ deepest needs, opening spaces for workers to come together to discuss the way forward, building movements that can win concrete demands, and obtaining broad support for a radical plan for challenging the triple crisis we face will all require a lot of patient work.

But it is the only viable road to start along if our goal is an ecosocialist future and not a shortcut to defeat.