China’s reckless mode of development has savaged its environment and ecology. Is a new revolution the only way to prevent disaster? 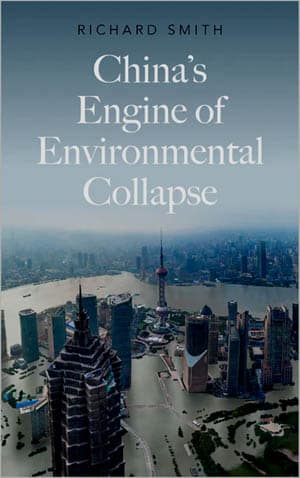 Richard Smith, a founding member of System Change Not Climate Change. is also the author of Green Capitalism: The God that Failed.

In China’s Engine of Environmental Collapse, author Richard Smith discusses the pollution of China’s air, water and soil, its waste of resources and its contribution to climate change.

The Chinese economy has grown very rapidly over the past 40 years. “In 1979, China’s economy accounted for just 1.8% of global GDP, as against 26% for the United States. Today, China accounts for 15.5% of global GDP while the US share has dropped to 23.6%.”

But this growth has come at a huge environmental cost. Smith writes:

“China’s reckless cheap-and-dirty mode of development has savaged its environment and ecology. Uncontrolled dumping has defiled rivers, lakes and aquifers. Long stretches of China’s rivers are officially classed as ‘too toxic to touch’. In 2016, the government reported that 80% of tested water wells across the North China Plain (home to 400 million people) were ‘so badly contaminated with industrial and other pollutants as to be unsafe for drinking or home use’, but urban residents and farmers have little choice but to drink those waters and irrigate crops with them. In 2013, the Ministry of Land and Resources conceded that three million hectares of farmland, an area the size of Belgium, was ‘too toxic to farm’ because of the overapplication of fertilizers and pesticides, irrigation with toxic industrial wastewater, and the dumping of toxic waste on fields.”

There has also been huge resource waste, as well as a terrible human cost.

“Builders and manufacturers have built shiny new cities and infrastructure at ‘China speed’, as People’s Daily likes to brag.  But in their haste to build and overbuild, they’ve wasted staggering quantities of natural resources and racked up the worst industrial health and safety record of any nation on earth, with more than 100,000 workplace deaths per year in recent decades.”

This wasteful development affects the world environment. “In its race to ‘catch up and overtake the US’, soaring carbon dioxide emissions have made China by far the leading driver of global climate collapse. In 2018, China’s CO2 emissions were nearly as much as those of the next five next-largest emitters (the US, India, Russia, Japan and Germany) combined.”

Smith documents these problems in detail. He also analyses the economic system that has produced them.

In Smith’s view, China’s social system is a hybrid of two systems: capitalism and “bureaucratic collectivism.” He does not explicitly define the latter term, but it seems to refer to a system in which the state plays a major role in the economy, and the state is controlled by a privileged bureaucracy. Smith shows that both the private sector of the economy (including transnational corporations, or TNCs) and the state sector contribute to the environmental disaster.

Beginning in the 1980s and accelerating in the 1990s, TNCs based in the US, Europe and Japan shifted much of their production to China. Their reasons included China’s low pay rates and lack of environmental protection, as well as the relative efficiency of the Chinese state in providing infrastructure. “Over the past four decades,” Smith writes, “China’s comparative advantage in the world economy has lain in three crucial factors”

In recent years, workers have made some gains:

“Chinese workers have nevertheless fought back, in waves of illegal strikes and protests in the early 1990s and the early 2000s; and from 2010 they succeeded in winning wage increases, improvements in working conditions, reductions in employer abuse, legal limits on overtime, and other gains. But [Xi Jinping’s] government has taken an increasingly hard line against labor unrest in recent years, closing down labor-focused NGOs and arresting strikers en masse.“

And while workers have made some economic gains, the environment has continued to deteriorate:

The transnational corporations try to maximize sales by promoting disposable products, designed to be thrown away and replaced by new ones after a short period of use. Examples include new fashions in clothing and new models of electronic goods. This increases the pollution and waste of resources in China.

China privatized or shut down many small and medium state-owned enterprises (SOEs), causing 30 million workers to lose their jobs in the late 1990s and early 2000s. But some key industries were kept under state ownership. Smith characterizes the state-owned section of the economy as characterized by “overproduction and waste … Beijing’s central planners launched wave after wave of gargantuan development projects, beginning in the 1990s.”

“But China’s state-owned producers don’t stop when they have produced and built enough. Beijing regularly complains that local officials squander resources in building superfluous housing, redundant infrastructure, and useless vanity projects that the country simply does not need. From the start, this investment boom has been characterized by overproduction, profligate waste of resources and energy, and needless pollution”.

One of the drivers for waste is the “hyper-nationalist ambition” promoted by Xi “to make China rich and powerful, to restore its ‘greatness’, to ‘catch up and overtake the United States’ and become the world’s leading superpower.”

Another motivation for government bodies and SOEs to launch big construction projects, many of which are wasteful, is to minimize popular discontent by providing jobs for workers. Big projects create jobs, not only in the state-owned enterprise themselves, but also in private companies that have contracts with SOEs.

But in addition, officials at all levels see big construction projects as an opportunity for them to benefit from corruption, for example by taking bribes in return for the allocation of contracts. Local governments and SOEs fund big projects by borrowing from state-owned banks, which are willing to lend to projects that will supposedly help make China “great.”

What is to be done?

Smith argues that China, like other countries, needs to take drastic action to cut pollution and waste. “China is going to have to shut down, phase out, or downsize thousands of fossil fuel-based, unsustainable industries across the economy. The same goes for the US, the European Union countries, Japan, India, and the other nations that presently account for the bulk of CO2 emissions.” This will require the creation of new, environmentally-friendly jobs for the hundreds of millions of workers who are displaced.

Smith argues that both the “normal” capitalist system, exemplified by the United States, and China’s hybrid system are “unsustainable and suicidal.”

“I contend that given the state of the planet today, the only way to prevent runaway global warming is to slam the brakes on economic growth in both China and the US, shut down entire swathes of useless, superfluous, harmful and destructive industries, and replace these political-economic systems with an ecosocialist world economy based on public ownership of most means of production, democratically planned production for need, and democratic management of the economy and society.

“Capitalism, democratic capitalism, or even ‘green capitalism’, is no solution for China’s environmental crisis…. No amount of tinkering with the market can brake the drive to global environmental and ecological collapse … we need a wholesale system change, especially in China and the United States.”

There has been a rise in strikes and protests in China in recent years. “Labor strife has increased decade after decade, along with growing protests over land grabs, pollution, the siting of chemical plants, incinerators and coal-fired power plants. Environmental protests frequently involve thousands of people and are often violent. China Labor Bulletin counted 1700 industrial strikes in 2018, up from 1200 the year before.” In Smith’s opinion, these outbreaks of rebellion indicate the potential for a new Chinese revolution.

Smith’s critique of China’s environmental policies is valid and very important. But some of his other comments are wrong in my opinion.

The whole concept of intellectual property (IP) should be questioned. The scientific achievements of humanity should be used for the benefit of the world’s people, not for the profits of corporations.

Smith claims that Xi’s “Stalinist state-owned sector is a poor innovator and without domestic IP protection his private sector isn’t much better. Since Xi’s economy has been unable, so far, to invent the advanced technology it needs, the government has been critically dependent upon importing that from the West since Reform and Opening in 1978, largely by forced transfer, and tech and IP theft.”

But there is nothing unusual in the fact that a later-developing capitalist country begins by importing technology from earlier-developing ones, before developing the skills to carry out its own technological innovation. Japan is an example.

Smith claims that Xi’s “sociopathic behavior” is “turning the world against China.” This is a gross exaggeration. The picture is mixed. Certainly, there is resentment towards China in some countries ‒ for example, China’s attempt to monopolize the South China Sea has antagonized countries such as Vietnam, the Philippines and Indonesia. But in some parts of the world, China’s prestige has been rising, due to its funding of development projects through its Belt and Road Initiative. Of course, these projects bring environmental problems like those in China itself.

Smith writes that “with China’s own citizens too terrified to openly oppose the government, some are whispering that ‘Only [US President Donald] Trump can save China’.” I doubt that many Chinese, even those most critical of the government, would look to Trump for salvation. There have always been some people in China with illusions in the West, but even many of them would have been shocked by Trump’s disastrous response to COVID-19.

Despite these criticisms, the book is well worth reading. It is very informative, and Smith is right to point to the need for system change, both in China and in countries such as the US.

Republished with permission, and with minor stylistic changes, from Green Left, October 14, 2020