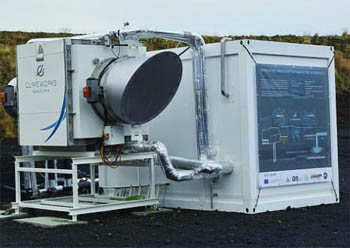 Biogeochemist David Schwartzman is Professor Emeritus at Howard University. He is co-author, with his son Peter Schwartzman, of The Earth is Not for Sale, which includes more discussion of this issue.

As always, thoughtful and respectful responses are more than welcome.

After twenty nine years since the last issue appeared, Science for the People magazine was relaunched with an online issue devoted to Geoengineering and Environmental Capitalism. In particular, the critically important issue of negative carbon emissions (NEC) was confronted by two papers, Holly Buck (2018) and Linda Schneider (2018). This issue is directly connected to the challenge of keeping warming below 1.5 deg C above the pre-industrial level. So I am interrogating their papers to look deeper into the question of whether NEC technologies need to be implemented along with the obvious requirement for early and radical reductions in GHS emissions.

I am not quite as pessimistic as Holly Buck regarding the remaining chances for keeping warming below 1.5 deg C, recognizing of course that radical changes in both the physical and political economies will be necessary to reach this goal. For a variety of assessments see Xua and Ramanathan (2017), Millar et al., (2017), Walsh et al., (2017), Goodwin et al., (2018),  Robinson and Shine (2018) and Lenton et al., (2019). In particular, Betts and McNeall (2018) point to the uncertainties in climate modeling regarding reaching this goal which was driven by the global South at Paris, COP 21.

And in an historic report, the IPCC (2018) strongly backed this goal, recognizing that meeting a 1.5 deg C target is still possible, requiring deep and early carbon emissions reductions and obviously far-reaching and unprecedented changes in all aspects of society. In their model pathways with no or limited overshoot of 1.5°C, global net anthropogenic carbon dioxide emissions decline by about 45% from 2010 levels by 2030, reaching net zero around 2050.

Further, this report recognized that implementation of NEC technologies is imperative, coupled with radical and early reductions in carbon emissions. Since this report, though still possible, the latest assessments point to an even greater challenge to keep warming at the 1.5 deg C target (The Real News Network, 2019; Harvey, 2019; Lenton et al., 2019; The IMBIE Team, 2019).

In their review paper, Hilaire et al. (2019) argue that a rapid large-scale deployment of negative carbon emission technologies are imperative to have any chance of achieving the 1.5 deg C target.

Holly Buck makes a strong case for the necessity of implementing NEC technologies, i.e. carbon sequestration from the atmosphere also known as CDR (carbon dioxide removal from the atmosphere), but only coupled with rapid and radical curbs on carbon emission and other greenhouse gases coming from fossil fuel combustion and current agriculture (for an updated discussion see Buck, 2019).

She is challenged by Linda Schneider (2018) who argues that “Geoengineering schemes — still largely hypothetical — not only fail to address the underlying causes of climate change; they carry their own profound political, economic, and ecological risks,” and these geoengineering schemes include NEC implementation. I strongly favor the latter, but not any other well-critiqued geoengineering approaches.

Without negative carbon emissions humanity will still face a climate hell future much worse than the horrors we now witness from climate change. A Global Green New Deal, increasing inspired by an ecosocialist perspective is arguably a path forward: see e.g., Aronoff et al. (2019) and Schwartzman and Schwartzman (2019).

While class struggle in every dimension informed by an ecosocialist agenda is still too weak to prevent the all deficiencies and risks identified by Linda Schneider in this transition, as the global climate and energy justice movement gains strength, then the opportunity to create a more sustainable and just solar transition will grow. But the creation of a wind/solar energy infrastructure and a NEC  capacity should be welcomed now. We cannot wait for the end of the rule of capital to start building these imperative technologies, it will be too late.

The atmospheric level of carbon dioxide, now a bit over 410 ppm, will not go below the safe level of below 350 ppm and kept there unless ongoing sequestration from the atmosphere into the crust is done for the foreseeable future because the ocean with its vast stores of carbon will continuously release it back into the atmosphere.

As one climate science group put it, “…CDR can be a game changer for climate policy in the sense that it significantly improves feasibility and cost considerations for achieving stringent climate stabilization. It is, however, a complement, not a substitute to the traditional approach of mitigating emissions at their source”  (Kriegler et al., 2013, 55).

This is why carbon sequestration from the atmosphere into the crust is absolutely imperative and it will require a rapid replacement of fossil fuels by a global solar power supply. We estimate a requirement of this energy (in power units) dedicated to this mode of sequestration to be on the order of 4 trillion watts for a strong carbon emission reduction of 6% per year scenario (Hansen et al., 2017), with the present primary consumption being 19 trillion watts (Schwartzman and Schwartzman 2019).

Now estimates point to the  need for even more aggressive reduction per year to achieve the 1.5 deg C target (e.g., Lenton et al., 2019).  A greater global energy supply than now is also required to eliminate energy poverty afflicting the global South as well as having the capacity to address climate adaptation and other challenges such as cleanup of the legacy of the military industrial complex (Schwartzman, 2016, 2017). Buck (2019) likewise argues that a massive increase in global renewable energy capacity will be needed for climate mitigation.  So even with eliminating carbon emissions, forgoing this form of carbon sequestration is a recipe for climate disaster.

Carbon sequestration from the atmosphere, mainly into the crust is absolutely imperative but only coupled with rapid curbs on carbon emission, starting with the fossil fuels with the biggest GHG footprint, coal, natural gas (methane leakage directly to the atmosphere) and of course tar sands oil, and using the minimum amount of conventional oil to do away with itself as an energy source for a global solar power infrastructure (see Schwartzman, 2017).  Thus, I strongly agree with Schneider’s point, “We need a rapid phaseout of global coal, oil, and gas production and a rapid deconstruction of fossil fuel infrastructure. We need a shift to one hundred percent decentralised renewable energy production and supply from solar and wind,” except there will be also big state and transnational created renewable energy production too, it’s already underway.

However, in their 2018 articles neither Holly Buck nor Linda Schneider mentions the most promising carbon sequestration approach, reacting carbon dioxide and water with mafic rock, basalt, with a pilot project in Iceland; see Oelkers et al., 2016; Schwartzman, 2016 and Perasso, 2018 for more on this approach (Buck does discuss this approach in her 2019 book). This is not the same as “Global-scale Enhanced Weathering”; I share Schneider’s critique of this mode of CDR.

Schneider claims that “The additional emissions that arise throughout the entire life cycle — from industrial-scale mining to processing, transportation, and distribution — cast doubt on the ability of proposed CDR [carbon dioxide removal from the atmosphere] technologies to ever effectively remove carbon dioxide from the atmosphere”. Yes, of course this will be the case if the energy sources for this life cycle are derived mainly from fossil fuels, precisely why the transition to wind/solar power is imperative!  Further, CDR technologies removing carbon dioxide from the atmosphere are now achieving higher efficiencies (Keith et al., 2018; von Hippel, 2018; Tollefson, 2018) but must be used to facilitate permanent underground storage by reacting carbon dioxide and water with mafic crust producing carbonates.

In conclusion, carbon sequestration from the atmosphere into the crust is absolutely imperative and it will require a rapid replacement of fossil fuels by a global solar power supply.  So forgoing NEC is a recipe for climate disaster.

Buck, H.J. 2018. ‘A Best-Case Scenario for Putting Carbon Back Underground’. Posted at: https://magazine.scienceforthepeople.org/geoengineering-environmental-capitalism/.

Schwartzman, P. and D. Schwartzman. 2019. The Earth is Not for Sale: A Path Out of Fossil Capitalism to the Other World That is Still Possible. World Scientific: Singapore.