“To say that ‘science and technology can solve all our problems in the long run,’ is much worse than believing in witchcraft.” — István Mészáros 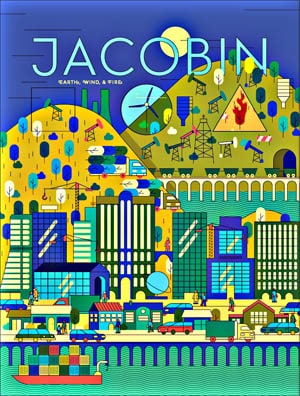 This summer, the left-wing magazine Jacobin published a special issue on climate change. The lead article declares that “climate change … has to be at the center of how we mobilize and organize going forward. From now on, every issue is a climate issue.”

That’s excellent news: a magazine that calls itself “a leading voice of the American left, offering socialist perspectives on politics, economics, and culture,” ought to be a leader in the fight against capitalism’s deadly assault on the earth’s life-support systems.

Unfortunately, if the special issue is any indication, Jacobin is heading in the wrong direction. Although the term eco-socialism appears from time to time (always with a hyphen, which may indicate some uneasiness with the combination) there is nothing in this issue resembling an ecosocialist analysis or program. There’s not a word about stopping coal or tar sands mining, and no mention of shutting down the world’s biggest polluter, the US military. Instead we are offered paeans to technology in articles that advocate nuclear power, geoengineering, new power grids, electric cars and the like.

But despite their technophilia, the authors display little understanding of the technologies they support. Take, for example, the piece by Christian Parenti. He has written elsewhere that the U S government can resolve the climate crisis without system change by supporting clean technologies, so “realistic climate politics are reformist politics.” This article says much the same, that “state action and the public sector” can solve climate change by implementing carbon capture and sequestration (CCS). He tells us that removing CO2 from the atmosphere is “fairly simple,” because it has been done in submarines for years, and because Icelandic scientists recently developed a safe method of injecting CO2 into underground basalt, where it becomes a limestone-like solid within two years.

That sounds impressive, but is it credible?

The idea that removing the CO2 exhaled by 150 sailors in a closed system is comparable to removing billions of tonnes from the open atmosphere is more than a little absurd. Parenti should have checked with the US Navy: last year it issued a request for proposals for new CO2 capture systems in its submarines because the systems now used “are relatively energy intensive,” and “the material has a short lifetime, requiring replacement underway, and hazmat wastes are complicated to handle.” Obviously, expanding that technology to cover the globe is not in the cards!

There is only one commercial plant in the entire world that captures CO2 directly from the air. According to the journal Science, it takes in just 900 tons of CO2 a year, roughly the amount produced by 200 cars. The company that built it says that capturing just one percent of global CO2 emissions would require 250,000 similar plants. “Fairly simple” just doesn’t apply.

As for the Icelandic experiment in storing CO2 in basalt, Parenti doesn’t seem to have read beyond the gee-whiz headlines. Geophysicist Andy Skuce reports in the Bulletin of the Atomic Scientists that the experimenters only buried 250 tonnes of CO2, and the gas had first to be dissolved in “almost unimaginable amounts of water” — 25 tonnes of H2O for every tonne of CO2. Not only is that unsustainable, “it is unknown how well the results in Iceland can be applied at large scale in other locales.” As Joe Romm of Climate Progress says, “CCS simply hasn’t yet proven to be practical, affordable, scalable, and ready to be ramped up rapidly.”

In his eagerness to promote a technical solution to climate change, Parenti fails to consider whether the technology will do the job, not to mention how we might convince governments to spend the 24 trillion dollars (133% of US GDP) that he thinks it will cost. Unfortunately, such lightmindedness is a common failing in this issue of Jacobin.

The views expressed in this issue of Jacobin are similar to those promoted in the Ecomodernist Manifesto, which claims that “meaningful climate mitigation is fundamentally a technological challenge,” and that “knowledge and technology, applied with wisdom, might allow for a good, or even great, Anthropocene.” Clive Hamilton describes this as “a form of denial or at least evasion, one that selectively permits certain facts through the optimo-filter while blocking or downplaying others.” We see it, in different forms, in the pronouncements of the anti-green Breakthrough Institute in the US, which wrote the Manifesto, and in Spiked-Online, an even more vehemently anti-environment group in the UK.

Is Jacobin becoming a voice for ecomodernism with a leftish veneer? I hope not, but the signs aren’t good. The first book in the new Jacobin Book Series, Four Futures, by Peter Frase, offers future scenarios based on science fiction movies and books: as Antony Galluzzo says in a review, this approach allows Frase to ignore “the technological, ecological, or social feasibility of [his] predictions.” The forthcoming second book in the series is co-authored by Leigh Phillips, who works with both the Breakthrough Institute and Spiked-Online and who wrote Austerity Ecology & the Collapse-Porn Addicts, an appalling anti-green screed that includes chapters titled “In Defence of Stuff,” and “There Is No ‘Metabolic Rift’.”

Frase and Phillips both advocate massive technology deployment in this issue of Jacobin — the former supports geoengineering, the latter nuclear power. Neither discusses the environmental, social and financial costs that such megaprojects would entail. If these are Jacobin’s advisors on climate change, it is definitely on the wrong track.

Ecomodernism is incompatible with ecosocialism. If Jacobin recognizes that and changes course, it can make important contributions to the fight against climate change.

I’ll keep my fingers crossed, but I’m not holding my breath.

AFTERWORD: Andy Skuce, whose work I mention in this article, died of cancer on September 14. I never met him, but I learned a lot from his articles and videos on climate change, especially his trenchant critiques of science deniers, on the invaluable website Skeptical Science and elsewhere. He will be much missed.