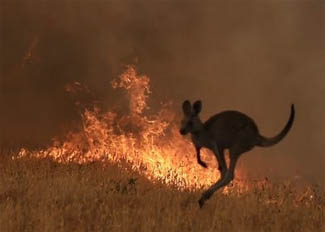 Hans Baer, a Principal Honorary Reseach Fellow at the University of Melbourne, is the author of Democratic Eco-Socialism as a Real Utopia.

by Hans A. Baer

Climate scientists and other observers often refer to various regions, such as the Arctic, low-lying islands, the Andes, and Bangladesh, inhabited by indigenous and peasant peoples as the canaries in the birdcage when it comes to the adverse impacts of anthropogenic climate change. It is often said that those people who have contributed the least to greenhouse gas emissions are the ones suffering the most from climate change, a more than accurate observation.

Conversely, there is one country, a developed one at that, namely Australia, that is punching above its weight in terms of contributing to greenhouse gas emissions, not only from domestic consumption but due to massive export of coal, that constitutes a canary in the bird cage signalling the adverse impacts of climate change.

Over the past decade or so, Australia as the driest settled continent, has been experiencing rising temperatures, droughts accompanied by water shortages and raging bushfires, storm surges and flooding, and the bleaching of its iconic Great Barrier Reef.

A tipping point of sorts began in spring 2019 when large portions of Queensland and New South Wales experienced high temperatures and bushfires that contributed to Sydney as Australia’s largest and most visited city being enveloped with smoke.

While this climate crisis impacted his Sydney electorate, Prime Minister jumped ship with his family for a holiday to Hawaii in mid-December, texting the ALP leader Anthony Albanese that he would be gone for a week and that Michael McCormack, the Nationals leader and Deputy Prime Minister, would be at the helm. Many Australians became outraged by the Prime Minister’s action, particularly after two fire fighters lost their lives fighting bushfires in New South Wales. Sensing this outrage, Morrison and his family returned to Sydney and he publicly apologized for having offended so many Australians by his actions.

When in early January 2020 Morrison visited Cobargo in New South Wales, he experienced overt hostility from various Cobargo residents whose community had been devastated by a bushfire.  Despite considerable political fallout, Morrison insists that Australia’s present emissions reduction policies are adequate to mitigate a climate crisis and bushfire risks while bushfires burn in six states. Due to the bushfires, Australia’s emissions have increased dramatically.

Like Sydney, although not as often, Canberra has also experienced smoke from the bushfires, to the point that government offices, universities, and other facilities were closed for 48 hours because the air had become extremely dangerous in the first days of the New Year. During this period, the national capital was reportedly the most polluted city in the entire world.

Smoke from the Australian bushfires had crossed the Tasman Sea and even reached as far away as Indonesia.

Melbourne residents woke up to a thick haze on the morning of 5 January, not so much as due to smoke from bushfires in New South Wales and East Gippsland on previous days, but largely from bushfires in Tasmania across the Bass Strait.

Australians often believe that they reside in the ‘lucky country’ which enjoys one of the highest material standards of living in the world, although this characterization does not apply for most Indigenous Australians and a growing number of non-Australians as the country experiences a growing amount of social inequality.

While Australians have experienced droughts and bushfires for some time, the intensity of these events and other climate-related events, such as storm surges and flooding, have become much more pronounced.

In addition to rising global greenhouse gas emissions, the warming of the Indian Ocean, known as the Indian Ocean Dipole or the Indian El Nino, in which there was a mixture of warmer waters off the African coast and the cooler water off the Indonesian coast may have contributed to late arrival of the monsoon in northern Australia and heat waves over much of Australia.

Anthropogenic climate change compels us to seriously confront not only its impact on Australia but the rest of humanity and non-human fauna and flora. Ultimately, it compels us to transcend global capitalism and begin a revolutionary ecosocialist shift to an alternative world system based upon social justice and parity, deep democracy, environmental sustainability and a safe climate.

Given the vested interests in the present system both in Australia and elsewhere, this will not be an easy task but the time is riper than ever to develop a radical social imaginary.

This imaginary will require challenging a world in which multi-national corporations make and break governments and politicians around the world and in which in the case of China, the Communist Party has capitulated to the dictates of the capitalist market.