How can socialism be rejuvenated to ensure social parity, democratic processes, and environmental sustainability for humanity? 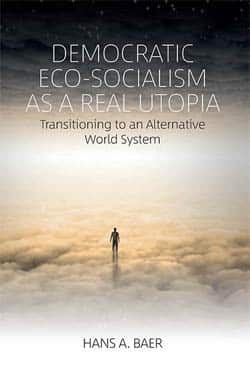 How can socialism be rejuvenated to ensure social parity, democratic processes, and environmental sustainability for humanity?

Introduction. In a previous article, I described Hans Baer’s essay “Toward Democratic Eco-Socialism as the next World System” as “an important contribution that merits study and discussion among all ecosocialists.”

Now Hans has written a book that both elaborates on the ideas he expressed in that essay, and outlines the views of a range of socialists on the struggle against capitalism and for an ecological civilization.

Democratic Eco-Socialism as a Real Utopia: Transitioning to an Alternative World System is published by Berghahn Books. The outline below was prepared for Climate & Capitalism by the author. Like his earlier essay, this book is an important contribution to the ongoing process of ecosocialist development and clarification. I hope it will stimulate wide discussion about what the aims of ecosocialism are and how they can be achieved. —Ian Angus

OUTLINE OF ‘DEMOCRATIC ECO-SOCIALISM AS A REAL UTOPIA’

This book is guided by the recognition that social systems, whether they exist at the local, regional, or global level, do not last forever. Capitalism as a globalizing political economic system that has produced numerous impressive technological innovations, some beneficial and others destructive, is a system with many contradictions.

More so than in earlier stages of capitalism, transnational corporations and allied organizations, such as the World Bank, the International Monetary Fund, World Trade Organization, and the European Union, make or break governments and politicians around the world.

Capitalism has been around for above five hundred years but manifests so many contradictions that it must be replaced by an alternative world system — one committed to social parity and justice, democratic processes, environmental sustainability, a safe climate, and preservation of biodiversity.

As delineated in this book, democratic eco-socialism, in the terminology of the late sociologist Erik Olin Wright, constitutes a real utopia, a vision that is theoretically achievable but requiring much reconceptualization and social experimentation.

Chapter 1 focuses on what might be its principal contradictions in terms of social justice and environmental sustainability, namely:

Given that climate change scenarios prompt us to imagine dystopian visions of the future, this chapter explores several mainstream and radical worst-case scenarios that humanity must avoid in order to preserve itself as a species along with other species.

Chapter 2 examines the discrepancies between the ideals and realities of socialism as they played out during the twentieth century, particularly in five contrasting countries, namely, Russia and the Soviet Union, China, the German Democratic Republic, North Korea, and Cuba. This chapter examines various interpretations that seek to determine the nature of post-revolutionary societies, asking whether they were instances of

This chapter also examines positive and negative features of post-revolutionary societies, particularly in terms of the economy and workplace, social stratification, and environmental problems. Their mixed record along with the fact that even a reformed and supposedly more environmentally friendly capitalism may spell the end of much of humanity strongly suggests that the concept of socialism must be rejuvenated to ensure social parity, democratic processes, and environmental sustainability for humanity.

The growing realization of the gravity of the global ecological crisis and anthropogenic climate change has prompted the development of numerous mainstream and countercultural visions of the future which are explored in Chapter 3. Ultimately a shortcoming of these future scenarios is that most are premised primarily on ecological modernization, which advocates a shift to renewable energy sources and energy efficiency but does not adequately address issues of social parity.

A shortcoming of the Green New Deal and postgrowth models is that they assume that some version of capitalism can function as a steady-state or zero-growth economy, when history tells us that capitalism in inherently committed to continual economic expansion as part and parcel of its pursuit of profits.

Chapter 4 argues that socialism remains a vision, one which requires that various individuals and groups grapple with alternative visions of socialism. As humanity enters an era of catastrophic climate change accompanied by tumultuous environmental and social consequences, it will have to consider alternatives that will circumvent the dystopian scenarios depicted earlier.

After briefly reviewing several Marxian-inspired future scenarios, this chapter seek to reconceptualize socialism by examining the notions of democratic socialism, eco-socialism, and democratic eco-socialism and critically examines efforts to create socialism for the twenty-first century in Venezuela, Bolivia, Ecuador, and Cuba. It also examines the pros and cons of Samir Amin’s notion of delinking as a strategy for escaping the clutches of global capitalism.

Chapter 5 acknowledges that anti-systemic movements are sure to be a permanent features of the world’s political landscape so long as capitalism remains a hegemonic political-economic system. It examines the role of specific anti-systemic movements, namely, the labour, ethnic and indigenous rights, women’s, anti-corporate globalization, peace, and environmental and climate movements, in creating a socio-ecological revolution.

They are a crucial component of moving humanity to an alternative world system, but the process is a tedious and convoluted one with no guarantees, especially given the disparate nature of these movements.

While not seeking to create a blue print per se for creating an alternative world system that will be manifested in different ways in the many countries around the world, Chapter 6 proposes several system-challenging reforms that potentially could facilitate a transition from the existing capitalist world system to a democratic eco-socialist world system. These include:

Chapter 7, the conclusion, argues that as humanity proceeds into the 21st century, its survival as a species appears to be more and more precarious, particularly given the impact of climate change in a multiplicity of ways looms on the horizon. More so than has ever been the case, it is essential for critical scholars and activists to envision future scenarios and strategies for achieving an alternative world system.

Perhaps more important is developing strategies to shift from the existing system of globalized capitalism to an alternative that transcends its numerous contradictions and limitations.

While presently and for the foreseeable future, the notion that democratic eco-socialism may be eventually implemented in any society, developed or developing, or in several linked societies may appear absurd, history tells us that social changes can occur very quickly once certain social structural and environmental conditions have reached a tipping point, a term that has become popular in climate science.