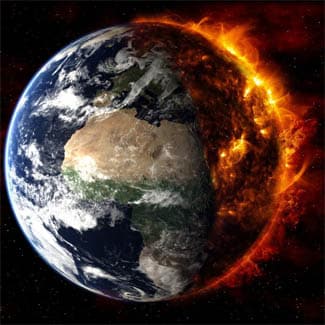 Despite what you may hear from science deniers, the greenhouse effect is proven fact. The role of carbon dioxide in warming the Earth was demonstrated by physicist John Tyndall in 1859, and his work has been confirmed many times over. If there were no CO2 in the air, Earth’s average temperature would be minus 18 degrees Celsius (zero degrees Fahrenheit), the oceans would be frozen and life as we know it would never have evolved.

Anyone who says that increasing the amount of carbon dioxide in the atmosphere doesn’t make the Earth warmer has to explain why the laws of physics don’t apply.

But while the physics of the greenhouse effect have long been known, only in recent decades have scientists fully understood the natural processes that have stabilized the level of CO2 in the atmosphere, and thus global temperatures, for millions of years.

This article outlines how the Global Carbon Cycle works, how it is being disrupted, and why it cannot heal the metabolic rift caused by modern capitalism.[1]

Carbon is the stuff of life, at every scale. Every living thing, from microbes to whales and from algae to redwood trees, is composed of carbon molecules. The planetary climate is regulated by carbon dioxide, which for billions of years has kept global temperatures within a range that living things can survive.

Like the other elements that are required by living matter, the supply of carbon would long ago have been exhausted if it were not constantly recycled. Plants alone could consume all the carbon dioxide in the atmosphere in just 8,000 years. Life continues only because carbon molecules are constantly recycled and reused in two separate but related biogeochemical cycles, a fast cycle controlled by biological processes in microscopic cells, and a slow cycle driven by tectonic forces that shape the entire planet.

The Fast (or short-term) Carbon Cycle takes from seconds to centuries to recycle carbon through living matter, soil, oceans and the atmosphere.

Its driving engine is photosynthesis, the complex process by which plants combine carbon dioxide, water and solar energy to produce the sugars (carbohydrates) they need to grow, and release oxygen as a waste product. Since all animals either consume plant material directly, or eat animals that do, photosynthesis is the basis of all food webs, and thus of all complex life.

Almost all of the CO2 that plants use is eventually returned to the atmosphere, water or soil. Some is respired almost immediately. Some returns when plants die and are decomposed by microbes and fungi — for large trees, that can take decades — or when they burn. Some is eaten by animals and moves on whenever they exhale and of course when they die.

Some of the CO2 released by respiration and decomposition is reused by nearby plant life, while the rest diffuses in the atmosphere or is dissolved in water. As the Keeling Curve shows, seasonal changes in CO2 production are quickly reflected as changed atmospheric concentrations around the world. A similar though slower process circulates dissolved carbon dioxide in the oceans, and there is a constant interchange of CO2 between air and water at the ocean surface, balancing the gas pressure in each domain.

These processes ensure that plant life everywhere has ready access to the tens of billions of tons of carbon it needs every year. All the air you breathe and all the food you eat includes carbon atoms that have passed through the fast carbon cycle many times over.

The Slow (or long-term) Carbon Cycle takes from hundreds of thousands to millions of years to move carbon between the Earth’s crust, the atmosphere and the oceans.

Its engine is plate tectonics, the slow but immensely powerful process that moves continents and circulates matter from deep in the Earth to the atmosphere and back.

In the slow cycle, carbon dioxide enters the atmosphere in volcanic eruptions that, before photosynthesis, were the primary source of atmospheric CO2. The annual quantity is not great by planetary standards, but it has been emerging from beneath the surface for billions of years, so the total is immense. If this were a one-way process, Earth would long ago have gone the way of Venus, with its dense CO2 atmosphere and surface temperatures that are hot enough to melt lead.

Fortunately for life on Earth, another long-term process, chemical weathering, removes CO2 roughly as quickly as volcanoes add it. It acts on the Earth’s crust, which contains vastly more carbon than the atmosphere, oceans, soil and all living things, combined.[2]

Rain, which is slightly acidic because it contains dissolved CO2, gradually erodes exposed rock. Chemical reactions between rock, water, and carbon dioxide produce calcium carbonate, which is carried by rivers to the oceans, where plankton, corals and other animals use it to build their shells and skeletons. Over time, those animals die and their hard parts sink, eventually forming a layer of carbon-based rock, mostly limestone, on the seafloor. That locks up the carbon for millions of years.

The cycle is completed by plate tectonics. Earth’s lithosphere (the crust and upper mantle) is composed of eight large and about 20 smaller plates, each up to 100 kilometers thick. Beneath the lithosphere, heat and pressure is so great that rock actually flows, carrying the rigid plates with it, very slowly. The plate that carries North America, for example, is currently traveling only an inch a year, but over billion of years such speeds have been fast enough to repeatedly remake the face of the planet.

When plates collide and one goes under the other, huge quantities of rock are carried into the mantle below. The friction and heat of this “subduction” scrapes off and melts much of the limestone that was deposited on the ocean floor — and that, together with other surrounding rock, forms the magma and gases that volcanoes expel at the surface.

Colliding plates also raise mountains: the Himalayas, for example, were formed when the plate carrying India collided with the Eurasian plate, 50 million years ago. When mountains rise, long-buried rock is exposed to the chemical weathering that creates calcium carbonate, and the cycle continues.

Atmospheric carbon dioxide has been called the control knob of Earth’s climate thermostat. When there is more CO2 in the air, global temperatures rise. When there is less, temperatures fall. For the past 800,000 years, and likely for much longer, CO2 levels have varied between 180 parts per million during glacial (cold) periods and 280 ppm during interglacial (warm) periods. The fact that it varied so little, despite the extraordinary processes involved, shows that the global carbon cycle has been well balanced, that over time additions of CO2 have been closely matched by removals.

That is all the more remarkable, because the slow and fast cycles actually work in opposite ways. As geophysicist David Archer writes:

“In some instances and on some time scales, the carbon cycle acts as a stabilizing influence on climate, a negative feedback. … In other cases, on different time scales and with different web diagrams of cause and effect, the carbon cycle can be an amplifier of climate variability, as for instance a co-conspirator in the ice age climate cycles that have been changing the face of the Earth for the last 2 million years.”[4]

The Fast Carbon Cycle, by contrast, tends to amplify temperature changes through positive feedbacks such as these:

There are countervailing tendencies: for example, more water vapor in the air also means that there are more clouds blocking solar energy from reaching the surface. Overall, however, the Intergovernmental Panel on Climate Change has concluded with high confidence that “the feedback between climate change and the carbon cycle will amplify global warming.”[6]

In short, warming causes more warming. Of course the reverse is also true — cooling causes more cooling — but there is nothing inherent in the fast cycle that puts it into reverse, without an external trigger such as the wobbles in Earth’s orbit that initiate the shift from ice ages to interglacials and back.[7]

Chemical weathering naturally works to limit warming or cooling, but it is too slow to be relevant to human societies.

In the fast cycle, some organic matter is buried before it can decompose. Under appropriate conditions, and over millions of years, some is transformed by heat and pressure into peat, coal, natural gas, or petroleum. Unless disturbed, it remains below the surface, although some may be carried by tectonic plates and returned to the atmosphere by the slow cycle.

Instead, the excavation and burning of fossil fuels has been rapidly transferring billions of tons of carbon a year, out of the slow cycle, into the fast cycle, disrupting both. The essential source of energy for capitalism’s growth and power is undermining Earth’s essential life support systems.

The Anthropocene has been described as the epoch when human activity is “overwhelming the great forces of nature.”[8] There is no question that capitalist industry and agriculture are overwhelming both components of the Global Carbon Cycle.

That carbon rift, a massive disruption of Earth’s metabolism, has pushed the Earth System into a no-analog state. Greenhouse gas levels have never before risen so much, so quickly.

The closest parallel in Earth’s deep history is the Paleocene-Eocene Thermal Maximum (PETM) 56 million years ago, when global temperatures suddenly rose by 5 to 8ºC and up to half of all ocean life died. The PETM was caused by a massive release of greenhouse gases, possibly from super-volcano eruptions in the North Atlantic. Over two trillion tons of long-buried carbon dioxide entered the atmosphere in 2,000 years, a blink of an eye in geological time.

For this discussion, the important point is this: after the emissions stopped, it took over 100,000 years for temperatures to return to pre-PETM levels.

Today, greenhouse gases are being added to the atmosphere 10 times as fast as in PETM at its peak. Since 1750, emissions have totaled close to 1.5 trillion tons, more than half of that since 1988. If business as usual continues, total emissions will reach PETM levels in this century. Rapid action to slash emissions could prevent that, but even then, many generations to come will face a much warmer global climate regime than humans have ever experienced.

Nearly two decades ago, after a decade of intensive research, the Carbon Working Group of the International Geosphere-Biosphere Project concluded that “although natural sinks can potentially slow the rate of increase in atmospheric CO2, there is no natural savior waiting to assimilate all the anthropogenic CO2 in the coming century. … it will affect Earth’s biogeochemical cycles for hundreds of years to come.”[11]

How much it affects them — and for how long — will depend on what action is taken to cut emissions, and how quickly they are reduced.

[1] Of course, this is a simplified account. Many books and technical papers have been written to explain carbon cycles, and research continues.

[9] Various studies give different absolute amounts, but all show that volcanoes emit less than one-hundredth of the CO2 produced by fossil fuels and land use change. https://skepticalscience.com/volcanoes-and-global-warming.htm