If you’ve ever wondered what a scientific representation of metabolic rift might look like, check out this graph.

If you’ve ever wondered what a scientific representation of metabolic rift might look like, check out this graph. 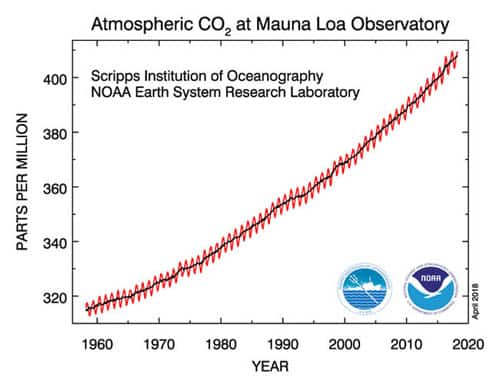 We are approaching the sixtieth birthday of the Keeling Curve.

It is such a stunning example of important and clearly presented science that it has been designated as a National Historic Chemical Landmark. Its creator received the highest US award for lifetime achievement in science, the National Medal of Science, “for his pioneering and fundamental research on atmospheric and oceanic carbon dioxide, the basis for understanding global carbon cycle and global warming.”

In July 1958, Dr. Charles Keeling of the Scripps Institution of Oceanography began measuring the amount of carbon dioxide (CO2) in the Earth’s atmosphere. Using measuring equipment and techniques he developed, he collected air samples daily from an observatory 3,000 meters above sea level, on the remote north side of the Mauna Loa volcano on Hawaii’s Big Island.

He continued doing this until his death in 2005, and his son Ralph, also a climate scientist at Scripps, has continued it since. The result is the world’s longest continuous record of atmospheric carbon dioxide. A recent release is shown above.

In his very first annual report, Keeling noted that the level at the end of the first year was higher than it had been 12 months earlier. That proved to be a permanent trend. The amount of CO2 in the air we breathe has risen from 313 parts per million to 411 — a 33% increase. Keeling’s work disproved the once common view that oceans and other sinks would prevent CO2 from fossil fuels from accumulating in the atmosphere.

Carbon dioxide is transparent to the part of the electromagnetic spectrum we experience as visible light, but opaque to the part we feel as heat. As in a greenhouse, sunlight gets in and warms things up, but the heat can’t get out. The more CO2 there is in the atmosphere, the warmer our climate will be.

A 33% increase in 60 years is a serious concern, but it’s much worse than it looks. In the 1990s, scientists drilled deep holes in Antarctic’s ancient  ice — the cores they removed provide an 800,000 year record of atmospheric CO2 levels. Through all that time, through ice ages and warm spells, the CO2 level was never higher than 300 parts per million. Greenhouse gas concentrations were already above that when Keeling started work, and they are still going up.

But there is something else of note in the Keeling Curve. Before the steady upward trend was clear, Keeling noticed something unexpected — CO2 levels rise from October to May and fall from May to October, creating a saw-tooth pattern, shown in red. He was the first person to see the Earth breathing.

The saw-tooth pattern reflects vegetation cycles in the northern hemisphere: CO2 is taken out of the atmosphere by living plants during the April-September growing season, and released by dead plants in the rest of the year. The pattern is slightly offset by the opposite seasons in the southern hemisphere, but since the majority of the world’s land, and the great majority of agricultural land, is in the north, the saw-tooth cycle is not over-ridden. This pattern has probably been unchanged as long as the continents have been in their present locations.

The saw-tooth pattern reveals an important example of the complex interworking of biological, chemical and geological cycles that define global metabolism. The planet’s orbit and tilt cause seasons, which trigger cycles of plant growth and decay, which cause atmospheric CO2 to rise and fall. While each of those cycles can be studied independently, they can only be fully understood as elements of the Earth as an integrated system.

Since 1958 the amplitude of the zigzag — the distance from high to low each year — has increased by as much as 50%. More CO2 is being absorbed by forests and plants in spring and summer, and more is being released in fall and winter, but the change isn’t balanced — the highs are increasing faster than the lows. Plants seem to be struggling to take in as much as possible. Other studies indicate that increased CO2 intake helps plants such as corn to grow faster, but reduces the crop’s nutritional value.

What the Keeling Curve shows, then, are two separate but connected rifts in Earth’s metabolism. First, the increase in total CO2 breaks with at least 800,000 years of history. Second, increased CO2 is changing the way that plants absorb and emit CO2, and that in turn is altering a seasonal cycle that has been unchanged for hundreds of millions of years.

In short, the Keeling Curve shows that Earth isn’t just breathing, it is hyperventilating. No one knows what the long-term results might be.