A pseudo-progressive argument for closed borders uses false logic and dubious statistics, and blames migrants for the conditions that force them to move. 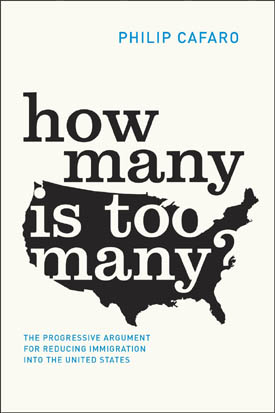 Phillip Cafaro
HOW MANY IS TOO MANY?
The Progressive Argument for Reducing Immigration into the United States
University of Chicago Press, 2015

Is there a progressive case for restricting immigration into the USA? After reading Phillip Cafaro’s book, my answer is still no — but I readily concede that there are too many intellectual hacks who use progressive-sounding rhetoric to advocate anti-immigrant positions.

Cafaro claims to be a “political progressive,” but like his fellow “patriotic eco-nationalists,” wants to see legal immigration to the USA drastically curtailed because “current immigration levels undermine attempts to achieve progressive economic, environmental, and social goals.” The social and economic consequences of immigration allegedly stem from the fact that

“flooded labor markets will harm poorer workers directly, by driving down wages and driving up unemployment. Mass immigration will also continue to harm workers indirectly by making it harder for them to organize and challenge employers, by reducing the percentage of poor workers who are citizens and thus able to vote for politicians who favor the poor, and by limiting sympathy between the haves and have-nots, since with mass immigration they are more likely to belong to different ethnic groups.”

Similarly, Cafaro contends that “mass immigration ensures that our population will continue growing at a rapid rate and that environmentalists will always be playing catch up,” especially “given the difficulties involved in getting 320 million Americans to curb consumption and waste.” Limiting immigration is the ethical thing to do: “as citizens we have a responsibility to do so if immigration levels get so high that they harm our fellow citizens, or society as a whole.”

To rectify the evils of “mass immigration,” Cafaro recommends a moratorium on all non-emergency immigration, until unemployment remains below 5% for three consecutive years, cutting legal immigration down to 300,000 annually, implementing an e-Verify program and criminal sanctions against employers of undocumented workers nationally, granting amnesty to select “long-time illegal residents” who have integrated, ending “birthright citizenship” for the children of foreigners, and revising trade agreements and better targeting foreign aid.

Cafaro was formerly the head of Progressives for Immigration Reform, a group associated with white nationalist John Tanton. Much of the data he cites comes from reports produced by another Tanton group, the Center for Immigration Studies (CIS), which the Southern Poverty Law Center has identified as an anti-immigrant hate group. SPLC describes CIS reports as “widely criticized and debunked.”

Calling Cafaro’s scholarship shoddy would be an understatement. Even when not citing CIS reports, his claims and data often appear deliberately misleading. For instance, he claims that “starting with the Immigration and Nationality Act of 1965, Congress greatly increased legal immigration levels, from around 250,000 per year to about 1.1 million per year today.” This, he said, led to a “Second Wave of mass immigration over the past fifty years, this time with a majority of immigrants coming from Latin America.” He fails to mention that that law actually reduced immigration from Mexico, and made it more difficult for seasonal workers to enter the U.S.

Cafaro’s handling of demographic projections is even more abysmal, designed more to give the impression that the only alternative to his proposals is “endless population growth.” As any demographer will say, the reliability of population projections rapidly declines with the length of the projection into the future — but Cafaro arbitrarily doubles the time covered by US Census Bureau projections to support his claim that “for every half million immigrants admitted annually we increase America’s population at the end of this century by 72 million people.”

Progressives are well aware of how companies have used (especially undocumented) migrant workers to drive down labor costs and break strikes, but also know that criminalization exacerbates rather than resolves this. Nonetheless, and in complete ignorance of how capitalist industry creates surplus population, Cafaro asserts that restricting immigration would lead to “tight labor markets” like in the “Great Pause in immigration” of 1924-1965, and to another “golden age for American labor.”

Even if we grant Cafaro’s dubious assertion that the decline in working-class prospects since the 1970s is due to immigration, and the equally specious claim that his proposal would sufficiently shrink labor markets to raise wages, deindustrialization, out-sourcing and automation would still drive unemployment — and increased restrictions on legal immigration would simultaneously increase the supply of undocumented workers for employers to exploit. Fortunately, even labor unions that formerly endorsed restrictive immigration policies seem to be learning from experience that organizing immigrant and undocumented workers, along with stronger bonds of international solidarity, are their best hopes for securing their futures and protecting their members.

Cafaro’s assertions of the environmental impact of immigration are also extraordinarily dubious. His assertion that “cities and states with the highest population growth rates have also sprawled the most” is a tautology, as is his attribution of changes in the “amount of developed land” and other resources (including emissions) not covered by increases in “per capita land use” to population increase. He never questions the underlying logic of suburbanization, automobility, and the vast quantities of waste built into US and international capital.

Murray Bookchin long ago showed that stabilizing or reducing population numbers will do nothing to inhibit the plunder of nature in the USA or globally for the sake of more wealth for the wealthy, and that advocating against immigration will certainly alienate environmentalists from the rest of the Left. In contrast, Cafaro uses twisted logic to assert that “with open borders the interests of nonhuman nature would be sacrificed completely to the interests of people,” ignoring the devastation that US corporations visit on environments and societies at home and abroad.

Cafaro at least recognizes that migration is often a choice that people should not have to make, or, as the poet Warsan Shire has elegantly put it, “no one leaves home unless home is the mouth of a shark.” He argues that US aid should be better targeted to alleviating poverty and that military aid should be eliminated. Progressives can agree with that — but we also know that they would not come close to redressing the damage and poverty caused by neo-colonialism.

Ultimately, Cafaro blames migrants for their own poverty and oppression, claiming that by choosing to emigrate, they shirk their “responsibility to work to improve their own societies” and instead “run away from them to the United States.” The vast resources and interventions of the imperial powers devoted to helping local elites brutally suppress efforts at improvement goes almost entirely unmentioned. Instead, he repeats the “safety valve” trope, contending that “America’s permissive immigration policies appear to enable demographic and ecological irresponsibility and continuing social injustice in these countries.”

Both in accusing migrants of taking the easy way out and complaining about their “irresponsible procreation decisions” at home, Cafaro makes borderline racist assertions, while, like many on the Right, claiming that charges of racism are just meant to shut down serious debate. Similarly, his complaint that the Sierra Club’s support for immigration reform involved “joining forces with corporate America in support of faster growth and the continued exploitation of low-income workers” smacks of the conspiracy theories white nationalists are known for.

Cafaro, like the CIS, claims to favor “low immigration” while being “pro-immigrant,” though I question the distinction here. His argument that the US government should restrict immigration “because we have different and stronger responsibilities to our fellow citizens than we have to the rest of humanity” is indistinguishable from similar claims made by nativists. It is clearly not justified by his arguments and it ignores the extent to which the US economy depends on the exploitation and plunder of “the rest of humanity.”

How Many is Too Many? contributes nothing of value or substance to the immigration debate. Cafaro’s supposedly moral argument that only US citizens are entitled to the country’s wealth because they produced it “through their own efforts,” is as false as his position against migrants is indefensible.

Brian M. Napoletano is a US immigrant to Mexico, where he lives with his spouse and two children, who are all native to Mexico. He is presently a geographer in the Center for Investigations in Environmental Geography at the National Autonomous University of Mexico.