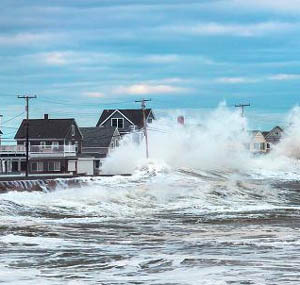 A draft United Nations report warns “the same oceans that nourished human evolution are poised to unleash misery on a global scale unless the carbon pollution destabilizing Earth’s marine environment is brought to heel,” according to Agence France-Presse, which exclusively reported on the 900-page scientific assessment Thursday.

The forthcoming report from a U.N. body that assesses science related to the human-caused planetary emergency is due to be released to the public Sep. 25, after diplomats and experts meet in Monaco to approve the final Summary for Policymakers.

AFP, which obtained a draft of the U.N. assessment, reported:

“Destructive changes already set in motion could see a steady decline in fish stocks, a hundred-fold or more increase in the damages caused by superstorms, and hundreds of millions of people displaced by rising seas, according to the Intergovernmental Panel on Climate Change (IPCC) “special report” on oceans and Earth’s frozen zones, known as the cryosphere.

“As the 21st century unfolds, melting glaciers will first give too much and then too little to billions who depend on them for fresh water, it finds.

“Without deep cuts to man-made emissions, at least 30 percent of the northern hemisphere’s surface permafrost could melt by century’s end, unleashing billions of tonnes of carbon and accelerating global warming even more.”

The Special Report on the Ocean and Cryosphere in a Changing Climate will follow the IPCC’s recent reports about what the world would look like with 1.5°C of warming above pre-industrial levels—the lower target of the global Paris climate agreement—and the need for transformative changes to land use to address both planetary heating and hunger.

In a statement earlier this year, Debra Roberts, co-chair of IPCC Working Group II — which focuses on the vulnerability of socio-economic and natural systems to the climate crisis — noted that the U.N. body’s October report showed the broad benefits to people and natural ecosystems of limiting global warming to 1.5°C.

“The Special Report on the Ocean and Cryosphere in a Changing Climate takes this story one step further by evaluating how human and natural communities with be affected by the impacts of climate change on two earth systems that touch all of our lives directly or indirectly, the ocean and the frozen areas of the world,” Roberts said. “It also assesses how we can set the course for a more sustainable and equitable future by reducing or better managing this impact.”

While those working on the IPCC’s ocean report aim to provide the international community with yet another tool to help avert the most catastrophic potential consequences of rising temperatures, AFP pointed out that the crucial advice for policymakers will be released “too late to be considered by world leaders gathering two days earlier for a summit convened by U.N. Secretary-General Antonio Guterres to extract stronger national commitments in confronting the climate crisis.”

When it comes to the September summit, which is focused on the key goals of the Paris accord,AFP reported that “Guterres may be disappointed by what the world’s major greenhouse gas emitters put on the table, according to experts tracking climate politics in China, the United States, the European Union, and India.”

“The Big Four—accounting for nearly 60 percent of global fossil fuel-based emissions—all face devastating ocean- and ice-related impacts, but none seem prepared just announce more ambitious goals for purging carbon from their economies,” AFP continued, detailing some of those impacts based on the IPCC draft.

Experts are divided on the anticipated timeline for such mass displacement due to sea level rise. However, Ben Strauss, CEO and chief scientist of the U.S.-based research group Climate Central, told AFP that “even if the number is 100 or 50 million by 2100, that’s still a major disruption and a lot of human misery.”
Strauss, whose research informs some of the IPCC report’s conclusions, added that “if we warm the planet by 2°C by 2100 we will only be at the beginning of a runaway train ride of sea level rise.”

In an op-ed published Thursday by Reuters, Greenpeace International executive director Jennifer Morgan declared that “tackling the climate emergency and protecting our oceans go hand-in-hand,” noting that “the oceans naturally take in huge amounts of carbon dioxide and are a key defense against the worsening impacts of climate change.”

Morgan called on world leaders attending the U.N. summit in September to “commit to adopting a strong Global Ocean Treaty in 2020.” She wrote:

“The scope of this new global agreement could be huge: almost half of the planet. The High Seas, oceans beyond borders, cover more space on our planet than all continents combined. Sadly, today these international waters are being ruthlessly exploited. In addition to climate change, pressures from overfishing, deep sea mining exploration, oil drilling, and plastic pollution are pushing our oceans to the verge of collapse. Only around 1 percent of the global seas are properly protected. There is no effective legal instrument that allows the creation of ocean sanctuaries — areas off-limits to harmful human activities — on international waters.”

“Scientists are clear that we need to protect at least 30 percent of our global oceans by 2030 if we are to safeguard wildlife and to help mitigate the impacts of climate change,” Morgan added. “But that will only happen if an ambitious ocean treaty is adopted fast and opens the door to creating effective ocean sanctuaries in international waters.”