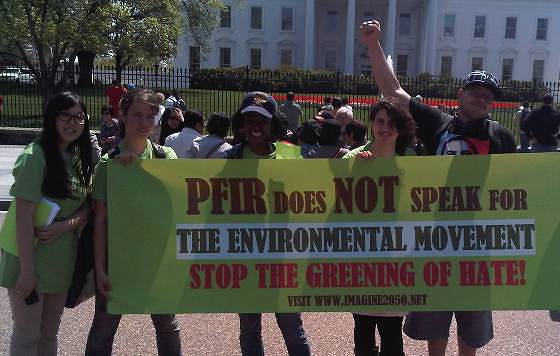 Participants in last year’s Power Shift conference in Washington took time out to picket the offices of Progressives For Immigration Reform. The protesters wore green t-shirts that read, “Real environmentalists stand with immigrants.”

I was recently invited to speak in Washington in October, at a public meeting organized by Progressives for Immigration Reform (PFIR).

PFIR president Philip Cafaro told me the planned event would be part of  “a new project, an ‘Environmental Impact Statement on US Immigration Policy,’ to look into the impacts or lack thereof of immigration and population growth on the US environment.”

He proposed a four-person panel featuring himself and and his colleague Leon Kolankiewicz, challenged by “two skeptics,” one of whom would be me. PFIR would pay my travel expenses, plus an honorarium.

PFIR is described by the Southern Poverty Law Center as a group that “purports to represent liberals who believe immigration must be radically curtailed in order to preserve the American environment … the latest attempt by nativist forces to appear as something they are not.”

What they really represent, as my good friends at the Global Environmental Justice Project say, is “just plain old racism in a fancy green wrapper.”

“Progressives for Immigration Reform (PFIR), a front group that is part of white nationalist John Tanton’s network of anti-immigrant groups, is grossly misnamed and far from progressive. Even the slightest tie to Tanton’s anti-immigrant network erases an organization’s ‘progressive’ credibility, and PFIR is a staunch Tanton-network mouthpiece.

“As such, it fills a very specific niche within the architecture of the anti-immigrant movement. PFIR exists, as its name suggests, to try and make the Tanton Network’s racist, anti-immigrant agenda palatable to moderates and liberals, often by describing environmental degradation and immigration in the same breath.”

PFIR has now launched a website for its new project, promising “a thorough, objective analysis of the ecological impacts of U.S. immigration policy.” They’ve posted a list of articles and books as resources — most of them toe the populationist line, but for window-dressing they’ve included a handful of critical works, including Too Many People?, which I co-wrote with Simon Butler, and The Greening of Hate, by Betsy Hartmann.

“Rather than present a new message, PFIR’s latest project attempts to disguise the same old rhetoric under a banner of objectivity. Their ‘United States Immigration Policy EIS’ lists a variety of resources, with articles by Tanton Network stalwarts like Roy Beck and Philip Cafaro (not to mention their contemporaries, including eugenics supporter Garrett Hardin and populationist Paul Ehrlich) listed alongside ecosocialist Ian Angus, the Population and Development Program at Hampshire College, and your very own Center for New Community.

“Unfortunately for PFIR, this desperate flail for credibility will not be accomplished by simply tossing a few names around. A PFIR-run, Tanton-backed examination of immigration policies will always result in the same vile conclusion no matter how the study itself is presented: white supremacists in the United States are threatened by the presence of immigrants.

“They will continue to try and lure unsuspecting environmentalists and politically progressive folks into their camp, but PFIR’s role within the anti-immigrant community is firmly cemented and well known. It is up to real environmentalists, those who reject the scapegoating of immigrants and the influence of bigotry, to continue to expose them.”