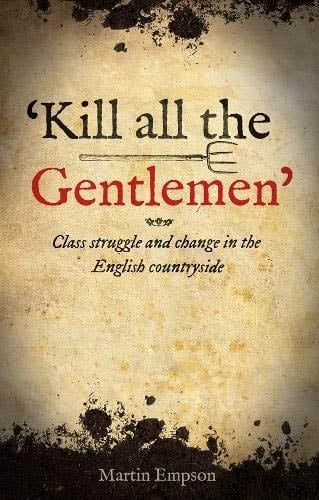 Martin Empson
‘KILL ALL THE GENTLEMEN’
Class Struggle and Change in the English Countryside
Bookmarks Publications, 2018

Who built the seven gates of Thebes?
The books are filled with names of kings.
Was it the kings who hauled the craggy blocks of stone?
—Bertolt Brecht, “A Worker Reads History”

For centuries, Britain was ruled by landowners who never dirtied their hands, living off the backbreaking work of farmers and rural laborers whose products fed them and paid their bills. But in most history books, and in TV dramas like The Tudors and Downton Abbey, the men and women whose labor paid for the banquets, balls and battles of the very wealthy are nowhere in sight. They are outside of politics, outside of history.

For the most part, and at most times, those invisible masses accepted their subordination as inevitable and appropriate. The rural workers who shyly tugged their forelocks as the landlord’s coach rolled by might curse under their breath, but they didn’t revolt.

Except when they did.

Every once in a while, as Trotsky wrote, life at the bottom becomes intolerable, and the oppressed “break over the barriers excluding them from the political arena.” Their actions terrify and outrage the ruling class and its hangers-on, for whom “the direct interference of the masses in historical events” is contrary to the natural order of things, a direct threat to their power, position and wealth.

As you can tell by its title, Kill All The Gentlemen is not a BBC costume drama. That slogan was raised by rural rebels in at least three sixteenth century uprisings. As author Martin Empson says, “it neatly sums up who the lower orders blamed for their problems.”

In Kill All The Gentlemen, the rural poor are invisible no more. They are, as Empson dramatically shows, agents of change who have repeatedly risen in revolt against the rich and powerful. He rescues those rebels from what E.P. Thompson called the “enormous condescension of posterity,” recognizing them as essential participants in the long struggle for human liberation.

Beginning with the great peasants’ revolt of 1381, and concluding with the agricultural workers’ strikes early in the 20th Century, his narrative “celebrates the rural class struggle for equality, justice and a better life.” Again and again, he shows, farmers and farm laborers have risen to demand, as Digger leader Gerrard Winstanley wrote in the 1600s, “that the Oppressed shall be set free, prison doors opened, and the Poor People’s heart comforted by an universal consent of making the Earth a Common Treasury.”

As well as a history of rebellion, Kill All The Gentlemen is a history of agricultural society in England, of the long transition from classic feudal control to peasant farming to capitalist enclosures and the birth of a rural proletariat. At the beginning of his account, the great majority of working people in England were tied to the land, bound by a host of restrictions enforced by landlords — which included the Church, one of the most powerful and oppressive feudal powers. At the end, in our time, barely one percent of England’s population is employed in agriculture, and farming is “almost completely mechanized and highly dependent on artificial pesticides, fertilizers and fossil fuels.”

Changes in agriculture changed the nature of rural rebellion, from petitioning the king for help to burning the machines that took workers’ jobs to demanding the right to collective bargaining — each new form of struggle reflected a new reality in farm life.

Today farmers in the so-called developing world are being squeezed by agribusiness and neoliberal policies. They are fighting back with their own forms of struggle, part of the “long tradition of class struggle in the countryside” that Martin Empson documents so well.

Kill All The Gentlemen is well-researched and documented, but it is not, I’m pleased to say, an academic work. It has none of the pretentious language and scholarly apparatus that makes most academic histories unreadable for working people. Martin Empson is a socialist, writing for people who want to understand the past in order to fight more effectively for our common future. He has done a great service by bringing the stories of these rebellions together in one volume, where they are accessible to a broad activist audience.

Bertolt Brecht wrote, “Hungry one, reach for the book — it is a weapon.” Kill All The Gentlemen is indeed a weapon, one that deserves close attention from everyone who wishes to be well-armed for the struggles ahead.