With 7,000 hectares of forests destroyed, community leaders and members have faced multiple attempts on their lives, threats and intimidation. 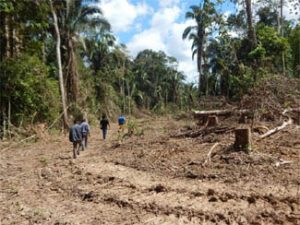 In the Peruvian Amazon, the battle between ‘sustainable’ palm oil and industrial-scale deforestation continues. The global body charged with certifying palm oil as sustainable, RSPO, was notified for a second time in March 2019 by the indigenous community Santa Clara de Uchunya that their lands, lives and livelihoods remain under threat.

The Shipibo community, located on the banks of the river Aguaytia in the Ucayali region, has filed a second set of complaints with the sustainable palm oil body RSPO against Alicorp S.A.A. and Oleaginosas del Peru S.A. (OLPESA). The community hopes to secure redress from these two companies who are profiting from the known destruction and conversion of their traditional forests to oil palm plantations.

“Our community has been fighting for years to reclaim our territory, yet despite our efforts, the plantation company continues to operate with impunity.

“How is it that companies which claim to act responsibly and sustainably, such as Alicorp and OLPESA, can purchase palm oil from our deforested and devastated lands, and provide a market to a company which operates outside of the law?”

Around 7,000 hectares of the community’s forests were destroyed for oil palm plantations by former RSPO member company, Plantaciones de Pucallpa. The destroyed forests included areas which the community used for hunting, fishing and gathering, as well as an important source of medicinal plants and materials for construction. Environmental impacts include the destruction and contamination of water sources and vital habitats for wildlife. Community leaders and members who have stood up to the operations have faced multiple attempts on their lives, threats and intimidation.

The company, Plantaciones de Pucallpa, engaged in a series of tactics to evade responsibility following an initial RSPO complaint filed by the community and allies in December 2015. These evasive actions included an auction of company assets in July 2016, when the plantations were transferred to their current operator, Ocho Sur P, as well as ultimately withdrawing from the RSPO membership to avoid sanction.

“This is the second time we have turned to the RSPO seeking a solution for Santa Clara de Uchunya,” said Miguel Guimaraes Vasquez, President of the Federation of Native Communities of the Ucayali (FECONAU).

“The first time, the company responsible for establishing the oil palm plantation, Plantaciones de Pucallpa, pulled out of the membership to avoid public condemnation.

“This time around, we hope that these companies who are benefiting from known violations by the source plantations aren’t allowed to continue enabling the dispossession of indigenous territories and the destruction of our forests, contrary to the commitments they have made before the RSPO.”

The community has presented the new complaints against Peru’s largest consumer goods company,Alicorp, and miller, OLPESA, together with their representative organisation, FECONAU, and allied organisations the Institute of Legal Defense (IDL) and Forest Peoples Programme (FPP). These new cases come after evidence emerged last year that palm oil produced by Ocho Sur P was being acquired for processing by several different mills, including Industrias Palm Óleo S.A.C., Oleaginosas Amazónicas (OLAMSA) and OLPESA, a RSPO member since April 2012. Around this time, Alicorp confirmed that they purchased around 4,500 tonnes of crude palm oil monthly from the three millers in question. Alicorp, which forms part of the Peruvian business conglomerate Grupo Romero, has been a RSPO member since January 2017 and has indicated that it hopes to achieve certification of its palm oil supply chain by 2019.

The complaints directed against Alicorp and OLPESA hold that their purchases of Ocho Sur’s palm, produced through clearance of primary forests and in violation of the community’s rights over their traditional lands, are a violation of the Principles and Criteria of their RSPO membership.

“The case of Santa Clara de Uchunya is well known to the RSPO.  In light of its familiarity with the origin and nature of the palm sourced by its members OLPESA and Alicorp, we are confident that the Complaints Panel will find in favour of the community. We look forward to cooperating with the panel as needed, including with respect to the protection of the claimants if they are exposed to retaliatory actions due to their complaints before this body.”

“In accordance with the Complaints and Appeals Procedures (2017), the Complaints Unit of the RSPO Secretariat is currently performing an initial diagnosis of the Complaints lodged against Alicorp S.A.A and Oleaginosas del Peru S.A. on 22 March, 2019, to determine its admissibility as a formal complaint.

“The Secretariat would like to reiterate its commitment towards upholding the independence of the Complaints process, and in such circumstances, wishes to inform the public that the Complaints Panel will refrain from making any comments on this media release. We remain committed to transparency and accountability, and take all allegations seriously.”

While awaiting the RSPO’s decision, Santa Clara de Uchunya continues to actively contest the Regional Government of Ucayali’s failure to comply with its legal obligations to title their collective customary lands and permit the landgrab and conversion of their ancestral lands to plantations. They currently await a potentially landmark decision from Peru’s Constitutional Court on this case.