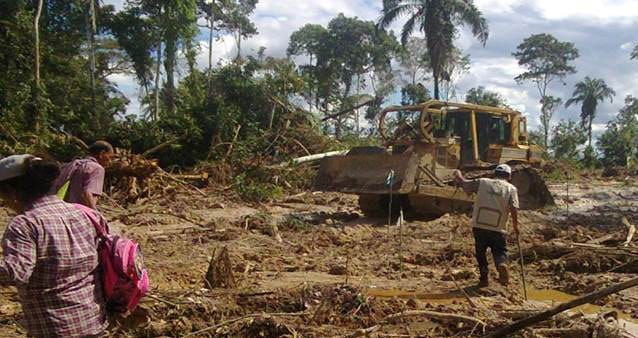 We, the Presidents of the Base Federations of ORAU, Indigenous leaders of the Indigenous Peoples of the Ucayali, Huanuco and Loreto regions, gathered as part of our Extended Coordination Council (CCA), with the presence of our national organization AIDESEP, which represents nine regional decentralized organizations in the north, center and south of the Peruvian Amazon. We are human rights defenders, we protect the forest, territories and river basins. In the face of mounting pressure from the expansion of oil palm monocultures, land grabbing and trafficking, illegal mining, an increase in narcotics trafficking which is causing violence, killings and threats in our own territory, we issue this resolution:

That, in 2020, 263 murders against human rights defenders were registered in Latin America, of which 202 of them happened in the countries of the Amazon basin (Colombia, Brazil, Peru and Bolivia), representing 77% of the cases.

That 69% of these murders in 2020 were against leaders working in defense of territory, the environment and the rights of Indigenous Peoples.

That in the first quarter of 2021 alone, 193 murders of Indigenous brothers and sisters (Colombia and Peru) who defended the rights of Indigenous Peoples and Mother Nature have been recorded.

That behind the murders of Indigenous defenders of human rights and Mother Nature, there are structural problems directly linked to the advance of extractive activities that respond to the interests of corporations with State agreements that promote hydrocarbons extraction and indiscriminate mining, aggressive deforestation, drug trafficking, militarization and the presence of an armed conflict that has been diplomatically silenced and that threatens the physical and cultural integrity of our peoples.

That the lack of titling of Indigenous territories represents one of the greatest threats, as most of the murders have taken place because of their work in defense of the territory and their actions in favor of its titling.

That the Inter-American Court of Human Rights (IACHR) has established that the loss of leaders represents damage to the social fabric of Indigenous Peoples and an express will to silence our voices, thus disrupting the organization and organizational structure by hindering the ability to express concerns about issues affecting our communities.

In view of the above and the evident violation of the human rights of Indigenous Peoples in the Ucayali region and other Amazonian regions, WE RESOLVE:

Signed by the following Indigenous organizations:

Thanks to the Forest Peoples Programme for sharing this declaration.