Part Two of Ian Angus’s examination of the disruption of the global nitrogen cycle by an economic system that values profits more than life itself.

Part One of this article outlined how the metabolic activity of specialized bacteria in soil and oceans drives the nitrogen cycle, by “fixing” inert nitrogen from the air into reactive nitrogen, converting it to forms that plants can use, and eventually returning it to the atmosphere.

As scientists from Germany’s Max Planck Institute explain, the “microbial nitrogen-cycling network” maintained a consistent level of reactive nitrogen in the global biosphere for billions of years.

“There is an astonishing diversity of microorganisms that transform nitrogen, and each of these microorganisms has discrete physiological requirements for optimal growth. As growth conditions in nature are highly variable and seldom optimal, nitrogen turnover by individual microorganisms is bound to be inefficient. However, nitrogen transformations in the environment are carried out by microbial communities that recycle nitrogen more efficiently than single microorganisms. Consequently, very little bioavailable nitrogen escapes to the atmosphere, and the small amount lost as dinitrogen gas is balanced by nitrogen fixation.”[1]

That vital cycle was disrupted in 19th Century Europe, when cities grew so large that the nitrogen and other nutrients consumed in food by the urban population could not return to the land, causing pollution in the cities and reducing soil fertility in the countryside.[2] What Marx called “an irreparable rift in the interdependent process of social metabolism”[3] was mitigated — papered over, not healed — by importing nitrogen-rich guano and mineral nitrates from South America to fertilize fields, and by building sewers to divert urban waste into rivers and oceans.

In the 20th Century, however, fossil fuels and industrial agriculture opened an even bigger rift, by deploying processes that annually release more than twice as much reactive nitrogen into the environment as nature alone has ever produced. In particular, close to 200 million metric tons of synthetic fertilizers are used every year — and most of the reactive nitrogen they contain escapes into the broader environment, polluting air and water and disrupting ecosystems.

The simple diagram published in Part 1 illustrated how bacterial activity controls nitrogen in the soil in natural ecosystems. The introduction of synthetic fertilizers, industrial agriculture, and fossil fuels means that few such ecosystems still exist. Natural bacterial fixation is no longer the largest source of reactive nitrogen, and the small amounts that have always escaped local ecosystems have become a flood that affects the entire biosphere. This diagram, though still much-simplified, provides a more accurate picture of the global nitrogen cycle in the 21st century: 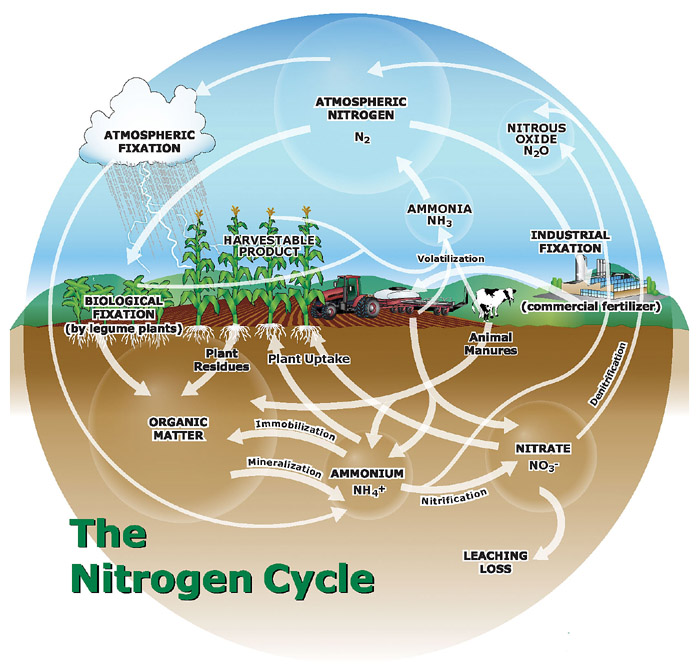 Climate change deniers often claim that carbon dioxide cannot be harmful because plants need it to grow. The same false argument can be made about nitrogen, and our reply is the same: too much of a good thing can be deadly. Organisms and ecosystems that evolved in a world where the supply of reactive nitrogen was strictly limited are now being disrupted, in many cases destroyed, by an unprecedented nitrogen glut.

The growing accumulation of carbon dioxide in the atmosphere can be measured directly — it recently passed 413 parts per million, a significantly higher concentration than at any time in the past 800,000 years. Determining the exact relationship between CO2 levels and global temperatures is a complex process, but there is no doubt that more CO2 equals higher temperatures.

There is no equivalent way to track the accumulation of reactive nitrogen, or to summarize its environmental effects in simple terms. Unlike carbon dioxide, most of the chemicals formed by reactive nitrogen can easily transform into one another, and they have different effects, depending on local conditions.

“Many thresholds for human and ecosystem health have been exceeded owing to Nr pollution, including those for drinking water (nitrates), air quality (smog, particulate matter, ground-level ozone), freshwater eutrophication, biodiversity loss, stratospheric ozone depletion, climate change and coastal ecosystems (dead zones). Each of these environmental effects can be magnified by the ‘nitrogen cascade’: a single atom of Nr can trigger a cascade of negative environmental impacts in sequence.”[4]

Any given nitrogen cascade may involve a different sequence of chemical transformations and effects. A nitrogen atom that leaches from agricultural soil into ground water, for example, will follow a different path than one produced by an automobile burning gasoline, and each can disrupt multiple biogeochemical processes. A graphic in Scientific American described one possible cascade:

“1. The nitrogen produced during fossil-fuel combustion can cause severe air pollution …

“2. before it then combines with water to create nitric acid in rain …

“4. When too much nitrogen enters terrestrial ecosystems, it can contribute to biodiversity decline and perhaps to increased risk for several human illnesses.

“5. A single nitrogen atom from a factory, vehicle or farm can acidify soil and contaminate drinking water before entering rivers …

“6. where it can travel to the oceans and help fuel toxic algal blooms and coastal dead zones.

“7. At any point during this chain, bacteria may transform the rogue atom into nitrous oxide, a potent greenhouse gas that also speeds the loss of protective stratospheric ozone. Only bacteria that convert the atom back to innocuous N2 gas can halt its ill effects.”[5]

Nitrogen cascades are not linear — atoms may repeatedly cycle through all or part of a sequence, or repeat one stage, or transfer to a different sequence, over time periods ranging from seconds to decades. But the overall effect can be summed up as more reactive nitrogen in the environment leads to more nitrogen cascades and more disruption of the biosphere.

The WAGES of Nitrogen

As the authors of the 2011 European Nitrogen Assessment report pointed out, “there is a huge diversity of Nr pollutant forms … leading to many secondary pollutants  (including many organic nitrogen forms in water and in air), and an even longer list of environmental effects. The problem of Nr in the environment provides a degree of complexity that few scientists are able to cover in full.”[6] They summarized the environmental threats posed by excessive reactive nitrogen using the acronym WAGES — Water, Air, Greenhouse balance, Ecosystems, Soil — and devoted a chapter to each.

The 2013 report Our Nutrient World provided this outline of the WAGES threats, including the effects of both Nitrogen (N) and Phosphorus (P).

“Water quality: Release of too much Nr and P to the environment affects marine and freshwater ecosystems by eutrophication, leading to algal blooms, with dead zones and fish kills, while also polluting aquifers and causing impure drinking water. Wide regions of most continents are affected, while it has been estimated that about 80% of large marine ecosystems are subject to significant eutrophication in coastal waters. In freshwater ecosystems, generally concentrations of 1-2 mg Nr per litre, and 0.1 mg P per litre or lower, are considered to cause eutrophication, but specific concentrations depends on the local hydrological and climatic conditions.

“Air quality: Reactive nitrogen contributes to several air pollution threats on human health, through emissions of nitrogen oxides (NOx) and ammonia (NH3), which lead to high concentrations of nitrogen dioxide (NO2), particulate matter (PM) and ground-level (tropospheric) ozone (O3). It is estimated that 60% of the global population in urban areas is exposed to PM, NO2 and other toxic N substances at levels above thresholds for adverse effects, while 60% of the increase in tropospheric O3 since 1900 is due to NOx emissions, with tropospheric O3 also causing around 5% loss of agricultural crop productivity.

“Greenhouse balance: Disruption of nutrient cycles has both climate warming and cooling effects. The greenhouse gas nitrous oxide (N2O) is the longest lasting warming component, while NOx contributes to tropospheric O3, which lead to further warming by reducing plant CO2 uptake. By contrast, atmospheric Nr deposition promotes plant growth and CO2 up-take, while Nr contributes to water-soluble particulate matter (PM), both of which contribute cooling effects. As a result of successful policies to reduce chlorofluorocarbons and other ozone depleting substances, N2O is now the main cause of stratospheric O3 depletion, increasing the risk of skin cancer.

“Ecosystems and biodiversity: Threats of too many nutrients include the loss of species of high conservation and food value which are naturally adapted to few nutrients and are threatened by eutrophication. Atmospheric N deposition exceeds 5 kg per ha annually across halve of the CBD’s protected areas in ‘global biodiversity hotspots’ and G200 ecoregions, and is estimated to account for 5-15% of current global biodiversity loss. By contrast, shortages of both N and P in agroecosystems limits productivity and can force farmers to seek additional agricultural land, leading to agricultural encroachment threatening virgin ecosystems.

“Soil quality: Too much Nr input can lead to soil acidification, both in semi-natural and forest ecosystems subject to high levels of atmospheric N deposition, and in agricultural ecosystems with intense rates of fertilization. While this may be mitigated by lime addition in agroecosystems, the effect tends to deplete essential soil bases in natural soils, while mobilizing toxic metals, leading to further risks for forest health and freshwater fish populations. Insufficient nutrient availability in agriculture leads to loss of soil fertility and can exacerbate erosion, while micronutrient shortages can also limit efficient use of available N and P resources.”[7]

As this outline shows, there are few (if any) ecological problems that don’t have a nitrogen component, that were not either initiated or made worse by the massive expansion of reactive nitrogen in the soil, air and water. Recent studies show that its harmful effects will be intensified by climate change.[8]

I plan to write separately on oceanic dead zones and toxic algae blooms, but a full account of reactive nitrogen threats to the global environment is beyond the scope of this series. Readers looking for more detail, including comprehensive references to the relevant scientific and technical literature, should consult chapter 4 of Our Nutrient World and chapters 5 through 9 of the European Nitrogen Assessment.

The key point is that the nitrogen glut (and the uneven distribution that causes shortages in some places, particularly sub-Saharan Africa) is damaging the biosphere in many ways. It is painfully clear that any serious effort to prevent ecological catastrophes in this century must include reining in the overproduction of reactive nitrogen.

To determine how that can be done, we need to understand how and why the glut occurred. How did the metabolic rift in 19th century agriculture, characterized by the depletion and waste of essential nutrients, lead in the 20th century to planetary rifts caused by massive oversupply and overuse of the same elements? A future article in this series will address that question.

[7] Mark A. Sutton et al., Our Nutrient World: The Challenge to Produce More Food and Energy with Less Pollution. (Edinburgh: Centre for Ecology and Hydrology, 2013), 32-3. “G200 ecoregions” are locations identified by the conservation group WWF as priorities.