It would be criminal if political criticisms keep the organized left from supporting and joining the Extinction Rebellion campaign. Three articles from the British left …

It would be criminal if political criticisms keep the organized left from supporting and joining the Extinction Rebellion campaign.

Three articles from the British left … 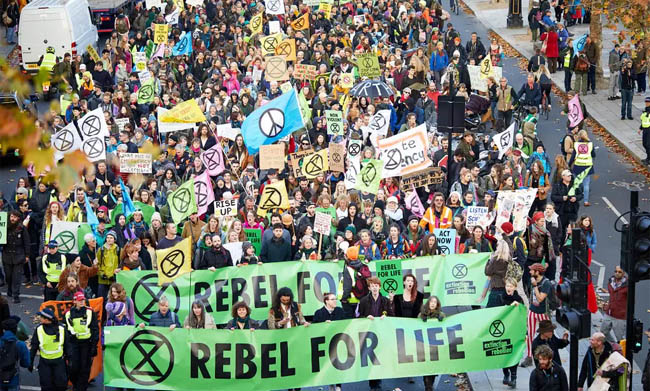 by Alex Callinicos
I’m sure there are very many people who feel the Extinction Rebellion (XR) protests in London over Easter mark a watershed.

First, there is the scale. There have been important direct action movements. Probably the biggest was the Committee of 100’s campaign against nuclear weapons in 1961-62.

But I can’t think of anything that has been as sustained as this—thousands of people in a week so far of highly disruptive protests in central London.

No doubt the British state, presided over by a weak, divided and distracted government, is on the defensive. But XR’s achievement is remarkable.

Secondly, there is the issue. Almost everyone recognizes that climate change is happening and is caused by human action. Almost as many people recognize that the establishment has not begun to do what is needed to stop catastrophic increases in global temperatures.

But increasing numbers believe we have little or no time left. A widely read paper by Jem Bendell of Cumbria University argues that the scientific evidence suggests it is “too late to avert a global environmental catastrophe in the lifetimes of people alive today.”

Climate change involves a variety of processes that may be on the verge of mutually reinforcing each other. For example, the Arctic is rapidly melting. This could lead to the release into the atmosphere of methane—an even more potent greenhouse gas than CO2— currently trapped in permafrost.

Bendell cites a study that warned of “atmospheric heating of over 5 degrees within just a few years of such a release.”

His conclusion is grim. “We are set for disruptive and uncontrollable levels of climate change,” he writes. “I mean in your own life.

“With the power down, soon you wouldn’t have water coming out of your tap. You will depend on your neighbours for food and some warmth. You will become malnourished. You won’t know whether to stay or go. You will fear being violently killed before starving to death.”

Climate change involves non-linear processes, where quite small changes may suddenly trigger a qualitative transformation of the entire system. So it’s hard to say whether or not Bendell is right that “civilisational collapse” is inevitable in the near future.

But more and more people fear that he is. It is this that has swept so many people behind XR’s banner and that motivates the school student strikes.

This poses a challenge for the left. There are various great Marxist studies that show climate change and the broader process of environmental destruction are a consequence of the drive for capital accumulation.

But this kind of theoretical insight still needs to be translated into political practice. Like the big parties, socialists have been obsessed and divided by the Brexit crisis. Meanwhile, the organised left has been largely missing from the XR protests.

It’s easy to pick holes in XR’s strategy. On the one hand, The Ecologist magazine says, “Extinction Rebellion is forging an international solidarity network to challenge capitalism, neo-colonialism and extractive industries.”

On the other, the Financial Times newspaper describes co-founder Gail Bradbrook, “dashing between fundraising discussions with a London hedge-fund owner and meetings to rally Extinction Rebellion volunteers”.

A hedge-fund owner? A War on Want report in 2016 found that firms listed on the London Stock Exchange control £166 billion worth of coal just in Africa and are drilling for oil in 27 African countries.

It would be absolutely criminal to make contradictions like this an excuse for not taking part in these new climate movements. Every new struggle draws in many people with a mixture of sometimes incompatible ideas.

The problem up to now has been that the sheer enormity of the threat of climate catastrophe has tended to induce passivity and despair. Now this is changing. Good—we should be part of this.

by Bill Perry
Sitting talking to XR rebels being released from police stations over the past few days I have had some wonderful conversations. People who have traveled from Wales, Scotland, Bath, Bristol or from across London. Young and old, students, forestry workers, farmers and many others. We all have stories to tell: about the critical mass bike ride and samba drummers in Parliament Square last Thursday, the pink boat and resisting its removal on Friday, or holding Waterloo bridge on Saturday. We smile and talk of our shared experience of the rebellion.

Then we talk about the climate crisis, the mass extinction we are in, the threat to humanity. It’s worse than we think. The IPCC predictions didn’t include the impact of methane that will be released as the permafrost melts. Climate refugees are already drowning in the Mediterranean Sea. Honduran farmers leaving their failing crops are in immigration camps in Texas. All of this is urgent. Our rebellion is vital. XR and the youth climate strikes have finally shifted things. The conversation is where it should be now.

Within this movement there are lots of debates about what should be done. I have heard people argue that we need strong government. But at a time when global governments are giving 5 trillion in subsidies a year to the fossil fuel industry the need for more, not less, democratic control of government is posed.

Or frugality is proposed as a solution. Is this more austerity for the poor, or a more fundamental shift to an economy that isn’t based on waste? These are to be debated. The pink boat in Oxford Circus had a banner on its side that said ‘System Change Not Climate Change’ and this is an idea that is now gaining more and more traction.

As is the idea of a ‘Just Transition’. The transition to clean energy must not penalize the poor. A transition that dismantles the machinery of war and waste that is destroying our environment could and should also raise the living conditions of billions of people in the global south at the same time.

Thousands of us have taken and held sites for days. Around a thousand people have been arrested and more are prepared to. This is a movement that is calling out the seriousness of the threat we face and it is asking people, and empowering people, to take serious action. As this phase moves to its end there is a serious job to do when we go back.

There is organizing to be done in our workplaces and our communities. Let’s target the corporations and the 1% who are responsible. Let’s make concrete demands that show what a Just Transition means. Let’s demand free public transport, new building standards, the rewilding of large areas, nationalization of the Honda plant to make electric cars or hydrogen buses, the stopping of the demolition of council estates that pours carbon into the atmosphere.

This movement is brave and imaginative, and it puts the question of what kind of priorities we want for society as central: of what and how things should be produced. These are powerful questions. We need a powerful movement to answer them. This movement has started.

by Andy Stowe
Within a few weeks of the organisation becoming nationally known the Daily Heil, preferred paper of lower middle-class British racists, has been treating its activists to the sort of mendacious character assassination it normally reserves for migrants and Jeremy Corbyn. It breathlessly informed readers that XR members included “a ‘neo-pagan’ mother who became an activist after taking psychedelic drugs, a failed organic farmer and a baronet’s granddaughter.”

That was positively complimentary compared to Adam Boulton on Sky News, a man who didn’t get where he is today by disagreeing with Rupert Murdoch. He made no secret of his own and his boss’s hatred of XR’s ideas and methods blustering that they are “a load of incompetent, middle-class, self-indulgent people.”

What are they doing that is so offensive to all the sorts of people socialists and environmental activists would want to offend?

They’ve been getting fairly large numbers of people to take part in different forms of direct action to put the issue of climate change and humanity’s impact on the environment onto the political agenda. This has included blocking busy roads and junctions in London for two nights and three days and similar actions have taken place in New Zealand, Denmark, the United States and more than twenty other countries.

Coming at the same time as the international wave of school student strikes, the actions by XR have been incredibly successful in inspiring many thousands of people to take action to prevent catastrophic climate change. George Monbiot spoke for many people when he railed on TV about the “pathetic micro-consumerist bollocks” often touted as a solution and got a big round of applause for telling the audience “we’ve got to go straight to the heart of capitalism and overthrow it”.

And that leads us straight to the first of two strategic dilemmas XR poses. In reality, catastrophic climate change seems much more of an immediate possibility than the global overthrow of capitalism in the next ten years. That’s not an argument against working for the establishment of international socialism, it’s simply an acknowledgement that the simultaneous downfall of Trump, Modi, Bolsanaro, Duterte and Putin is something of a long odds bet.

Most socialists don’t argue that nothing can be done about racism, poverty or women’s oppression until after the successful revolution. In practice they fight small and large battles for things that can be won in the here and now. But for some reason the fight against climate change has to be contingent on overthrowing the ruling class.

Applying the same approach to the ecological crisis suggests that we have to also argue for changes that can take place both before the climate reaches its tipping point and while capitalism is still the dominant economic system. There are various intermediate solutions possible even in a capitalist economy such as demanding the implementation of the 1.5C proposed by the IPCC in Paris. When we are talking about the political consciousness of hundreds of millions of people across the planet that is a much more comprehensible target than overthrowing the ruling class.

The second issue is the tactics they want activists to engage in. Most people’s personal circumstances don’t allow them to strip to their underwear in the House of Commons, spend the night on Waterloo bridge or go to a demonstration with the express intention of getting arrested. All these can be useful forms of class struggle, but by their very nature will prevent tens or hundreds of thousands from engaging. Activism becomes the preserve of a highly committed minority whose personal circumstances allow them to do these things. This minority must also begin to actively engage with all those beyond it who understand the gravity of the situation and also want to do something that won’t get them sacked or locked up.

Which bring us on to politics. The movement says it’s “beyond politics”. The fact that some of its supporters chained themselves outside Jeremy Corbyn’s house suggests that they know it’s not. They’ll also know that Corbyn and most of his leadership team are going to be their biggest and most significant political supporters. Labour Party members at every level have to start engaging with XR. We can combine the strength, passion and creativity of their campaign with the hundreds of thousands of members and millions of voters who know that a Corbyn Labour government can deliver exactly what XR is calling for.