Part One and Part Two discussed how the global nitrogen cycle works, and the environmental damage caused by the massive increase of reactive nitrogen in the soil, air and water in the 20th century.

Part Three discussed the “Fossil Nitrogen Era” in the 19th century, when European and American capitalism attempted to restore soil fertility by mining nitrogen-rich guano and minerals in South America, but still faced shortages of the chemicals needed for both agriculture and war.

In the second half of the 20th Century, profit-driven industrial technology turned the nitrogen shortage into an environmentally destructive nitrogen glut. 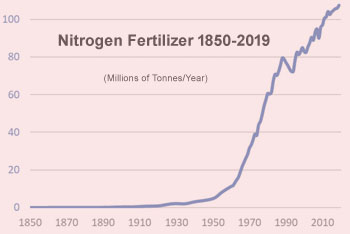 Anyone who has seen the iconic Great Acceleration graphs will recognize the curve on the right — a century of slow growth, followed by a sharp upturn after World War II. Very similar graphs, showing the long-term growth trajectory of CO2 and methane emissions, primary energy use, ocean acidification and other major environmental trends, were produced by the International Biosphere-Geosphere Program in 2004. As the scientists involved pointed out, each of the trends showed a radical increase in pollution and environmental destruction after 1945 — “the most rapid transformation of the human relationship with the natural world in the history of humankind.”[1]

World War II and its aftermath created the conditions for the Great Acceleration, initiating a new epoch in Earth System history, the Anthropocene.[2] Nitrogen production is playing a key role in that destructive transition to global environmental conditions that no human has ever experienced.

Until 1900, all of Earth’s reactive nitrogen was produced by a few types of microbes that had evolved the ability to make it from the inert nitrogen in the air. All living organisms depended on — and evolved to live with — the limited amount of nitrogen that microbes could produce.

Then, in a geological instant, industrial production overwhelmed a biogeochemical cycle that has sustained life on Earth for billions of years. Today, more reactive nitrogen is produced in factories than by all natural processes combined. The capitalist “solution” to limited biological nitrogen led directly to a far more serious environmental crisis in our time.

The global shift to industrial nitrogen began early in the 20th century, shortly after Sir William Crookes appealed to scientists and industrialists to put more effort into research on nitrogen fixation. He was English, but the most intense efforts in that field were made in Germany, which was the largest importer of Chilean nitrates and correctly saw itself as the most vulnerable to blockade if war broke out. In the years leading up to World War I, the world’s largest chemical company, Badische Anilin- & Sodafabrik —  Baden Aniline and Soda Factory, always called BASF — played a leading role in funding research and in commercial production.[3]

Extracting reactive nitrogen from the inert dinitrogen molecules in the atmosphere was a daunting chemical and engineering challenge. Breaking the powerful bond that holds the nitrogen atoms together would require pressures and temperatures far above any achieved by 19th century scientists in laboratories, let alone in continuous factory production. It is a measure of the perceived potential for profit that three very different nitrogen-fixing technologies were developed and in commercial operation by the beginning of World War I. Each produced a different chemical compound from which reactive nitrogen could be obtained relatively easily.[4]

All three were in commercial use well into the 1930s, but ammonia synthesis proved the most profitable — in particular because, although it used enormous amounts of energy, it required less than one-tenth as much energy to produce a ton of fixed nitrogen as the electric arc process, and about one-third as much as the cyanamide process.[5] As a result, today virtually all synthetic nitrogen is produced by variations of what is commonly called the Haber-Bosch process after its inventors, who won Nobel Prizes for their work.

Fritz Haber, a chemist whose research was funded by BASF, invented and demonstrated the ammonia synthesis process in 1909. Carl Bosch, a BASF engineer, invented the technologies that took Haber’s process from laboratory demonstration to mass production. By early 1914, a BASF ammonia synthesis plant in Oppau, in western Germany, was producing 20 tons of ammonium sulfate fertilizer a day, and plans had been made to double production in the following year.

Those plans were interrupted by war.

“The First World War brought carnage, destruction, and waste without precedent. Industrial society’s capacity to satisfy human need through mass production had turned into its opposite: industrialized slaughter. The war was an extreme expression of the competition between national-capitalist blocs. The whole industrial power of the rival blocs was harnessed to building, arming, and maintaining mass armies….

”Two factors were decisive: first, the great powers were divided by imperial rivalry as their industries expanded and competed; and second, when the powers clashed, these same industries could mass produce the means of destruction.”[6]

BASF was among the largest of the corporations that contributed to industrial slaughter. With government financing and guaranteed profits, the Oppau plant was quickly retooled to produce nitric acid for explosives and shipments to munitions makers began in May 1915. When French air raids showed that Oppau was vulnerable to attack, a much larger plant was built in Saxony, out of bombing range. By the end of the war, the two factories were producing far more fixed nitrogen than German plants using either the cyanamide process or the older process based on coking.

Smil describes this as “one of the origins of a phenomenon that marked so much of Germany’s, and the world’s, subsequent history: the rise of a military-industrial complex.”[7] Military support made BASF the world leader in production of synthetic nitrogen: when BASF merged with five other chemical companies in the mid-1920s to create I.G. Farben, its nitrogen fixation operations accounted for two-thirds of the combined organization’s immense profits.

Germany wasn’t the only country in which the military and private corporations collaborated on nitrogen fixation. In the United States, the 1916 National Defense Act allocated $20 million to build factories to produce nitrogen for the munitions industry, promising that they would produce fertilizer when the war in Europe ended. Two factories were built in Alabama, but the war ended before production began, and the promised conversion to fertilizer manufacturing never occurred.

After the war, the U.S. Army’s Fixed Nitrogen Research Laboratory built its own ammonia production plant to test improvements to the Haber-Bosch process, and shared its research with industry, without charge. As historian Timothy Johnston writes, “the General Chemical Company … adapted technologies from this model plant in their own facilities and as a result became the largest producer of ammonia in the United States until World War II.”[8]

The most important technical development of the inter-war years was a modification of the Haber-Bosch process to use natural gas (methane) as the source of hydrogen: this was less expensive, and produced purer gas, than previous methods. Germany had no access to natural gas, so I.G. Farben leased the new process to Standard Oil of New Jersey, whose plant in Louisiana began using it in 1931. Ever since, the nitrogen industry has been tightly linked to the petroleum industry, which provides both energy and feedstock. Today, about 3% the world’s natural gas production is used to fix nitrogen, and industrial nitrogen production generates about 3% of global carbon dioxide emissions.

After a wartime boom, grain prices collapsed in the 1920s, bankrupting many farmers and radically shrinking demand for fertilizer. The Great Depression of the 1930s made things worse. So, although ammonia synthesis plants were built in a number of countries in those years, their output mostly replaced nitrogen from Chile and from older technologies, and global production of synthetic nitrogen fertilizers grew slowly or stagnated. It would take another war, and another large dose of government/military spending, to create a nitrogen boom.

At the beginning of the 1940s, before it entered the war, the US government launched a crash program to expand nitrogen production for munitions. Ten factories were built in various parts of the country, paid for with public funds but operated by private companies. Total U.S. production capacity in wartime was about 880,000 tonnes a year, almost all of it used for weapons.

At the end of the war, the government sold the factories for a fraction of their value: most were bought by the companies that had been operating them.[9] The largest, in Ohio, was acquired by Allied Chemical, a conglomerate that included General Chemical, which got its start in nitrogen fixation in World War I. The privately-owned plants began shipping nitrogen fertilizers in 1947.

Others who profited from government nitrogen spending included the engineering companies that had designed and built the U.S. Haber-Bosch plants — after the war they used the expertise acquired in wartime to build similar factories for others. By 1960, in the United States alone, thirty-eight companies were operating fifty-four plants with a combined capacity of 3.6 million tonnes of fixed nitrogen a year.[10] Globally, ammonia synthesis capacity tripled in the 1950s, more than doubled in the 1960s, and doubled again in the 1970s.[11]

The nitrogen shortage was “solved” by creating a glut.

The amount of reactive nitrogen produced by all terrestrial sources is now at least double the pre-industrial level, and recent studies indicate that it may be over three times as great.[12] Most industrially-produced nitrogen is used in agriculture, a very inefficient way of providing the nutrient that humans need: less than ten percent of the nitrogen applied to crops makes its way through the food chain to our mouths.[13] The rest cascades through the environment as multiple forms of polution.

“The negative consequences of these nitrogen additions are substantial and manifold, ranging from eutrophication of terrestrial and aquatic systems to global acidification and stratospheric ozone loss. Of particular concern is the fact that chemical transformations of nitrogen along its transport pathway in the environment often lead to a cascade of effects. For example, an emitted molecule of nitrogen oxide can first cause photochemical smog and then, after it has been oxidized in the atmosphere to nitric acid and deposited on the ground, can lead to ecosystem acidification and eutrophication.”[14]

As the authors of the Our Nutrient World report write, industrial disruption of the nitrogen cycle is “the greatest single experiment in global geo-engineering ever made.”[15]

[4] The best history of the development of nitrogen fixing technologies is Vaclav Smil’s, Enriching the Earth (MIT Press,2001), to which my brief account is indebted.

[9] The sale of nitrogen-fixing plants was part of a more general post-war selloff of government-built factories. See Facing the Anthropocene, 138-141.

[13] Of course, even the nitrogen in our food ends up in the environment.

[15] Mark A. Sutton et al., Our Nutrient World: the Challenge to Produce More Food and Energy with Less Pollution. (Edinburgh: Centre for Ecology and Hydrology, 2013), 4.