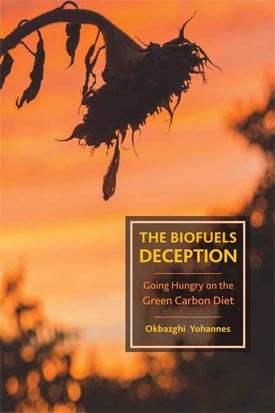 On March 15, 2019 up to 1.5 million students walked out of class to demand action in the face of looming environmental catastrophe. In the UK one of the most popular slogans was “System Change not Climate Change” reflecting the protesters’ feelings that capitalism and its politicians had failed them. As Marxist writers like John Bellamy Foster and Ian Angus have shown, capitalism is at heart, a system that puts the accumulation of wealth above the general interests of people and planet. In the face of this, the capitalists have to find alternative ways of continuing to make their profits and, one of these is the use of biofuels.

Biofuels have been marketed by multinationals, governments and corporate think-tanks as a green way of producing energy. Because they are plants, the argument goes, they are effectively carbon neutral, sucking carbon dioxide from the atmosphere and then releasing the same amount back when they are burnt. Biofuels could produce electricity, propel cars and airplanes and essentially continue to allow the system to do what it has always done, without the climate catastrophe.

However, in this closely argued book, Okbazghi Yohannes argues that it is a desire to continue the system of accumulation that lies behind the drive for biofuels, not an interest in saving the planet from catastrophe.

“The underlying motivation of those who call for biofuels is not to solve energy and food shortages or reduce climate change. Rather, the goal is to resolve the anarchy of agricultural production in the Global North, brought about by the green revolution and the consequence transformation of agriculture into a food-manufacturing system during the second half of the twentieth century — a transformation made possible by integration with the petroleum industry.”

The Green Revolution produced a surplus of grain for the agricultural and grain trading corporations and it was these, rather than the oil companies that initially pushed the idea of biofuels. The contemporary capitalist state has become a proponent for biofuels through the influence of the food and fossil fuel multinationals. Both the US and the EU, together with other international organisations are pushing biofuels as a solution to climate and food scarcity, and encouraging policies that will facilitate further production of these crops.

The problem is, as the majority of Yohannes’ book is devoted to explaining, that biofuels are not a solution to hunger, environmental disaster or anything else. In fact they are likely to make these things worse. In part, the issue is the limitation of bourgeois economics:

“The call by ecological economists to redesign capitalism in such ways as to establish a thermodynamic balance between what is bio-physically possible and what is ethically, socially and psychically desirable smacks of romantic petty-bourgeois utopianism.”

The other issue is simple physics. Growing the quantities of biofuels that are needed to generate the energy and food suggested by their proponents would require enormous deforestation, vast quantities of water and, because the production, processing and transport of biofuels uses lots of energy, contributes significant amounts of carbon to the atmosphere. To take just one of numerous statistical examples, Yohannes points out that:

Yohannes reports one study as showing that one gallon of [biofuel] ethanol needs 129,600 BTU of energy to produce, but only has an energy value of 76,000 BTU, so we are effectively wasting energy to produce energy. There are similar shocking statistics about water use, deforestation and environmental destruction associated with biofuel production.

No one could read this book and believe that biofuels are the solution to any of the social problems we face. But Yohannes doesn’t simply argue against the biofuel strategy, he also argues for an alternative. It involves a recognition that the biofuel strategy arises out of a need for capitalism to greenwash its continued accumulation of wealth. This has partly been done by the covering up of the impact of biofuel production, for instance, in the aftermath of the food crisis of 2008, George Bush’s administration suppressed a World Bank report that “showed the link between the food crisis and ethanol production”.

But the state itself is not neutral, it exists, as Yohannes reminds us, to facilitate the accumulation of wealth, and he argues we are seeing a “transformation of the state as a geo-economic agent in the service of the bioproduct industrial complex and the transition to a post-petroleum bioeconomy.” I’m not one hundred percent convinced that this is a global phenomena as I think the state is primarily concerned with making sure that the fossil fuel corporations can continue and that biofuels are a part of doing this, but I do agree that increasingly biofuels are seen as a key component for certain nation states and multinationals in terms of future accumulation.

This would be interesting enough, if Yohannes left it there. But the final chapter is devoted to showing how a rational, sustainable agriculture could develop. This, he argues, requires the direct producers taking control of the food system. Problems of hunger, environmental disaster and water shortages are the direct result of the insanity of production under capitalism. The alternative is the “masses of peasants and workers, who together must then begin to create a sustainable world.” It’s a vision of change that fits well with the demands of the school students.

Okbazghi Yohannes provides a wealth of statistical data and information. At times this is a little overwhelming, but so is the environmental disaster we face. The information it contains makes a powerful argument, not just against biofuels, but for a new post-capitalist world. The task is for us to get there.