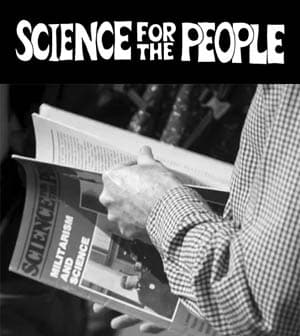 Since 2015, Science for the People has been organizing to revive a movement for science in service of people, not profit, that dates back to 1969. In 2018, Science for the People magazine published our first issue in almost thirty years, a special collection on the consequences of geoengineering, the massive technical projects which propose to fundamentally alter our biosphere in response to climate change.

In 2019, we want to continue to bring even more radical science to the people — in the lab, in the classroom, and in the streets. By radical — from the Latin for roots — we mean examining the root of assumptions and power structures in all areas, so that our future need not be dictated by our past or present. Help us put out three issues of Science for the People in 2019, including our upcoming relaunch issue on “The Return of Radical Science” and keep building our movement to make sure science in the 21st century serves the people, not corporate or military interests.

To do this, SftP needs to raise $20,000 in the next 30 days
For more information, and to contribute, go to the Kickstarter page, now.